Sitting here penning this week’s instalment of the OAC report watching the world go by, sipping a cool freshly squeezed orange juice in a most beautiful plaza in Seville winter training seems but a distant memory and thoughts turn to the delights of spring and summer of racing with fine weather, longer evenings and especially some post-race refreshments to look forward to! The week certainly began this way in sunny Whitehead but took a bit of turn as Storm Hannah battered NI over Friday and Saturday leading to some cancelled parkruns and the shortening of the Mourne Skyline race. There was however once again a bit of a noticeable warm Orange glow come Sunday evening!

Monday, 22nd April, 2019
Swayed by the beautiful Easter Monday weather and the prospect of some great post-race hospitality 7 OAC athletes made their way to the lovely seaside town of Whitehead to take part in a 5 mile race that is one of the longest running events on the racing calendar. As the train slowly pulled out of Central it was shaping up to be one of those memorable OAC outings but soon things took a more serious turn when Mr Todd mentioned the infamous and aptly named Slaughterford Road. Its ‘Awful’ exclaimed Gerald, ‘and you have to run up it three times!!’ Incidentally on the train journey we learnt from our resident OAC historian that there are no streets in Whitehead. With a base at the Whitehead Community Centre the race run by Whitehead Runners starts in Cable Road before turning into Kings Road down over the railway and then 3 laps of the Village to cheering crowds and grandstand finish down the main drag! Despite the unseasonably hot April weather everyone survived the Slaughterford Road hill and there were some decent OAC performances despite Brian even being distracted by the sight of the Steaming 186 Whitehead Easter Eggspress train mid race! Finishers were rewarded with a unique medal a Cadburys crème egg and a bountiful spread in the Community Centre. Elaine Weston in her first race as an OAC member conquered the course in 45:04 and Andy McIntyre 44:27 being careful before the Belfast Marathon took the opportunity to help pace his better half Catherine to a time of 44:26. Other OAC times are as follows David Fletcher 33:59, Michael O’Donaghue 34:40, Brian Todd 36:38, Gerald Harvey 43:38.
Mark McKinstry of North Belfast Harriers stormed to victory in a mere 25:41 and Allyson O’Toole of East Coast was 1st Female in 34:37.

On a cold Thursday night 6 Orangegrove athletes were competing at the 2nd meet of the Firmus Fab 5. It was a very successful and exciting night….with medals clinking their way home in the cars of cold parents who came along to support.
Issac Orr…came a fab 4th in the U11’s 600m in his heat in 2.11.52. And 2nd in the cricket ball throw with a throw of 21.07…(could we have NI Cricketer in Issac with that throw…?)Zoe Van-der-line took on U11 Girls 60m…coming a respectable 6th in her heat in 11.39. She went on to compete in Long jump against a very large field and came 21st. Well done Zoe.Sarah Van-der-linde (the big sister) came 11th in the U13 Long jump….and 1st in her heat over the tough distance of 200m.Martha Orr was also competing in the Long Jump and 200m. And she came a very respectable 14th in Long Jump …and 3rd in her 200m heat.Aaron McCord took on the Senior Mens 200m (only 16)…coming 4th in a great time 23:97….get prep for his upcoming District Schools comp.Matthew Sykes also took on the 200m race in the U17’s category (only 14)…coming home with a silver medal after a spectacular fall across the finish in a huge PB of 24.85. The medal made the skinned arm.leg and back much more bearable. Well done to everyone.

While many from Orangegrove were running the streets of old London town, Brian Todd was literally ‘on his Todd’ in the Orchard County for the Run Armagh 10k for the latest installment of the Novosco 10k Grand Prix series. The race started on the main Belfast road adjacent to the Planetarium and race HQ was in the gymnasium of The Royal School. Brian was impressed that they provided an abundance of spotlessly clean ablutions prior to the race….something that is unfortunately becoming a rarity these days! The race itself was a single loop incorporating College Hill, Portadown Road, Drummnamore Road, Ballybrannon Road, Loughgall Road, Railway Street and Lonsdale Road, finishing amidst the Georgian splendor of The Mall. This was not an easy race. The first 5k, in particular, were particularly challenging and it seemed there was very little compensating downhill in the second half. Gerald Harvey would not have liked this one! Nevertheless, the conditions were perfect for running, the countryside was beautiful and both the welcome and race organization were second to none. Tea was taken afterwards with some fellow runners in the Armagh City Hotel. Not a bad way to spend a Sunday afternoon at the end of April!
The Run Armagh 10k was won by Gareth Lyons (North Belfast Harriers) in 34.28 and Faith Viney (unattached) was first lady in 38.30. Brian Todd…45.09 (43/321)…and still standing (just about!).

While everyone at home bracing themselves for a wet and windy weekend with the onslaught of Storm Hannah a magnificent 11 of OAC athletes and the support crew made their way south to London for what has become the marathon that almost everyone wants to have on their running CV! While the entrants were doing last minute prep, carb loading and checking out the amusements of the now obligatory marathon expo some members of the OAC support crew took the opportunity to do a bit of parkrun tourism in Southwark Parkrun. Brian McFarland and Beverly Martin ran the course as first timers in 27:53 and 30:36.
As the sun rose over London on Sunday morning and our intrepid 11 gathered themselves and made their way to the start line at Blackheath and Greenwich the weather conditions were looking promising for some great running compared to the roasting received a year ago! All the talk in the lead up had been about the battle between Eliud Kipchoge and Mo Farah but our own athletes were out to prove a point themselves and capitalize on a very tough training program over the last 16 weeks with performances that would make all the blood, sweat and sometimes tears well worth it!
As the drama unfolded on our TVs, computer, tablet and phone screens it became clear that this years VLM would go down as one of notable vintage. Our runners excelled in the great conditions and put in some great performances to record several PBs and some strong runs. In the end all 11 OAC starters crossed the finishing line on the Mall and the times are as follows:
Pauline Bayliss 03:36:09 PB
Des Fahy 03:28:32
Robin Montgomery 03:07:41
Heather Flint 03:35:49 PB
Ian Grant 03:46:50
Gillian Logan 03:41:50
Alison McConnell 03:47:30 PB
Gavin McGuckin 03:12:01 PB
Edwina Ternan 03:29:26 PB
Chris Woods 03:33:39 PB
Alison Canning 04:06:44 PB and 1st time Marathon
As the London Crew made for the airports and ferry terminals recovering from running and a few post marathon celebrations thoughts turn to an exciting week ahead with the main event being the 1st ever Sunday Belfast Marathon this coming weekend. With no less than 26 OAC Athletes toeing the line for the full marathon and 2 relay teams it promises to be an exciting weekend ahead! 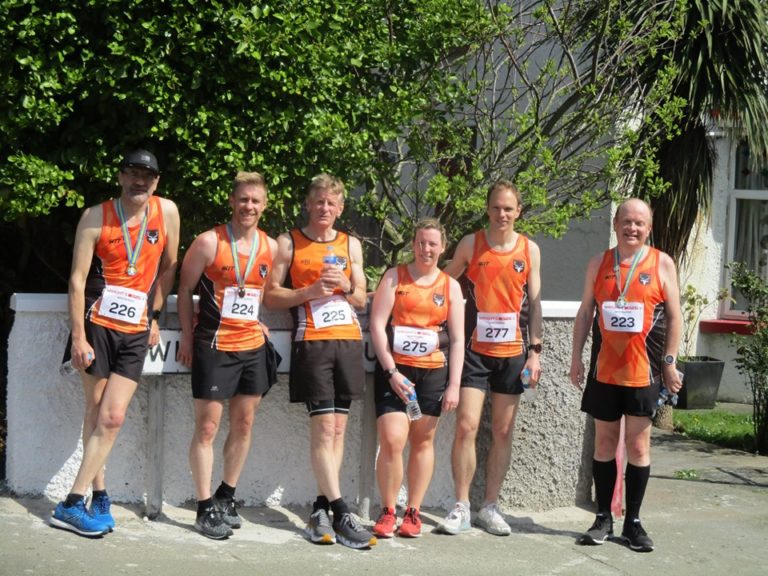 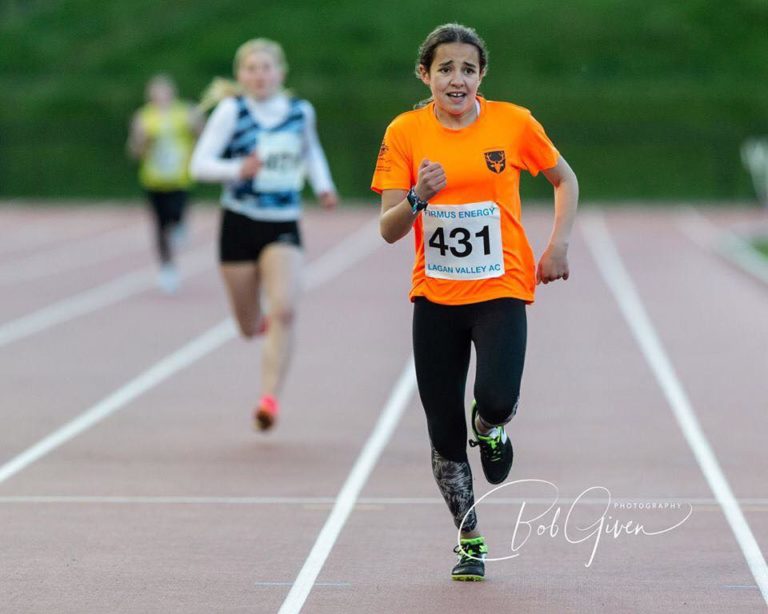 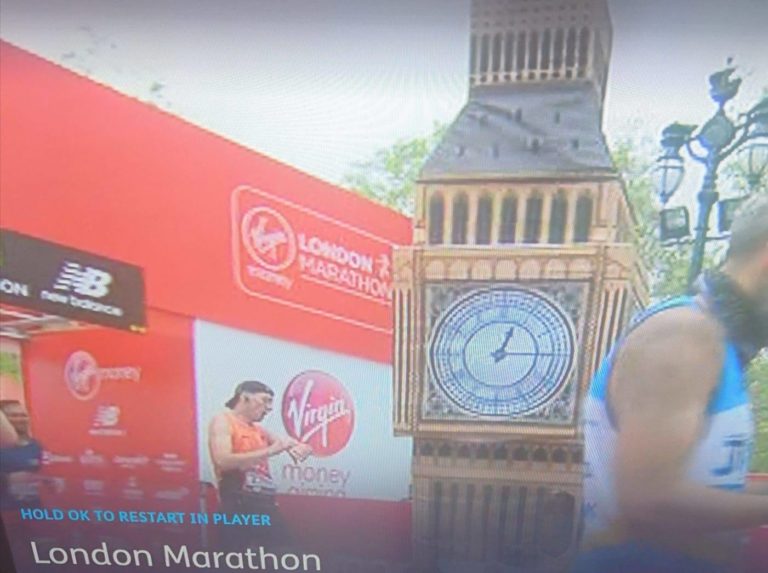 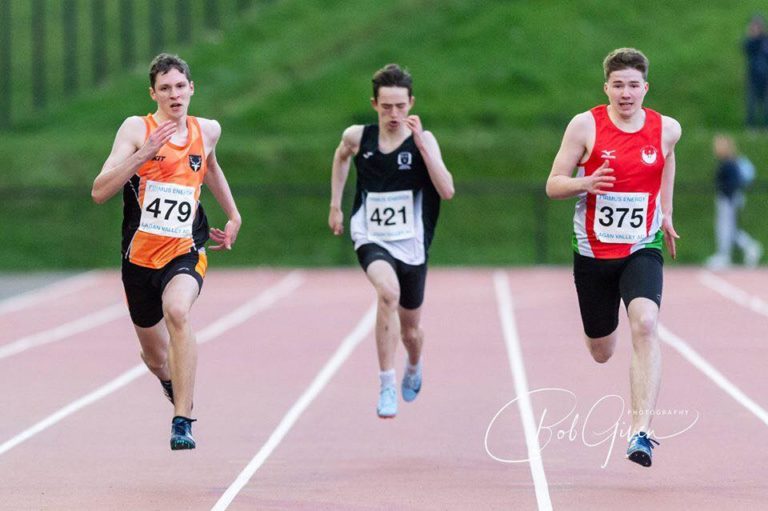 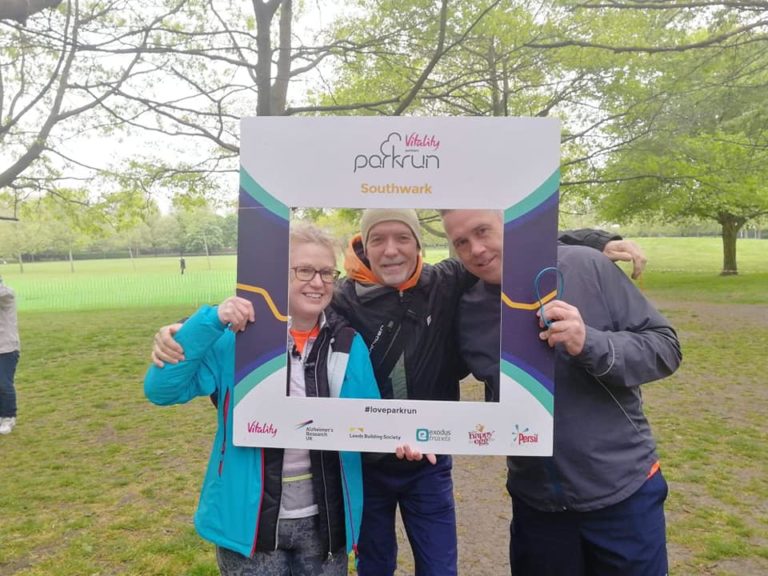 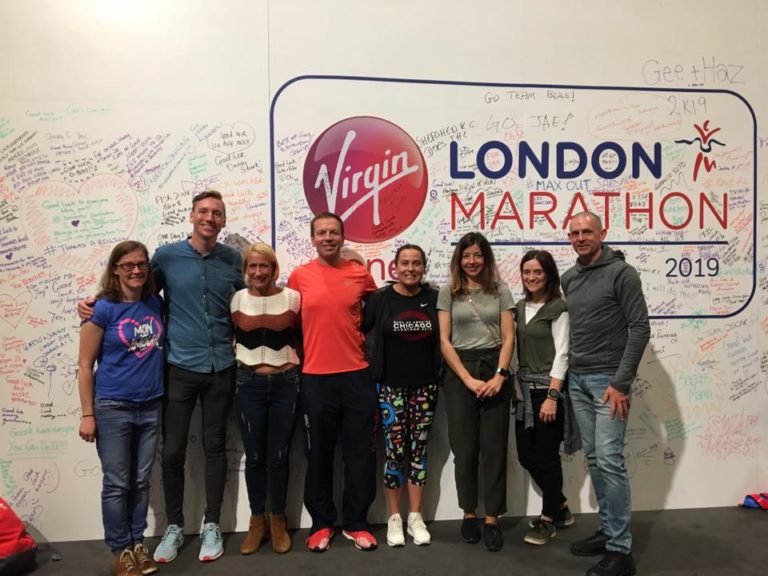 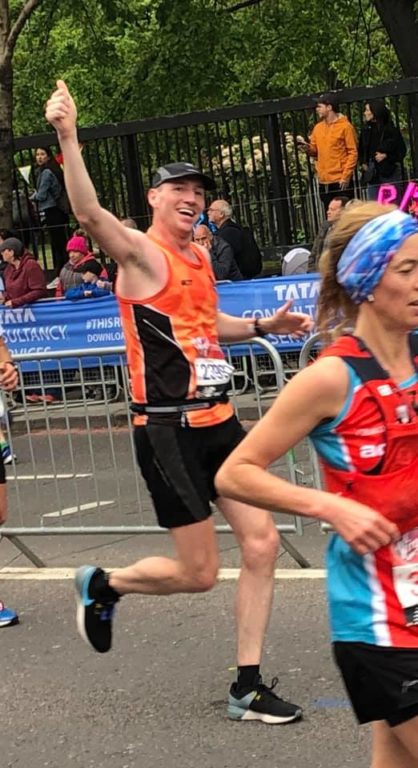 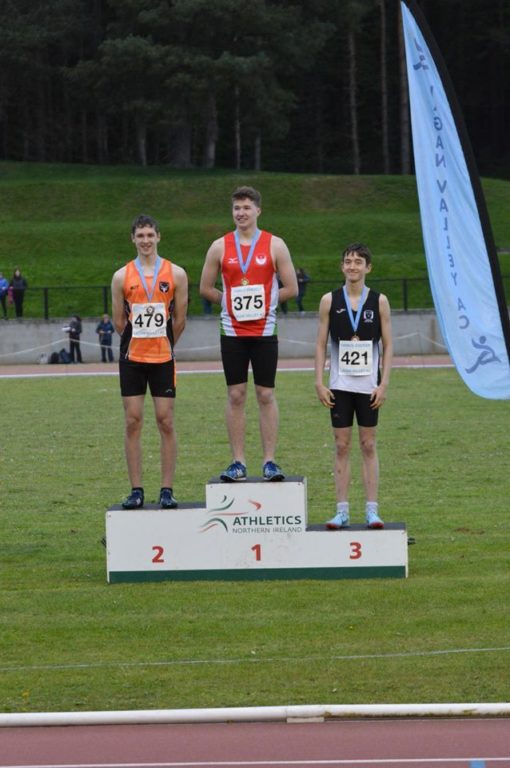 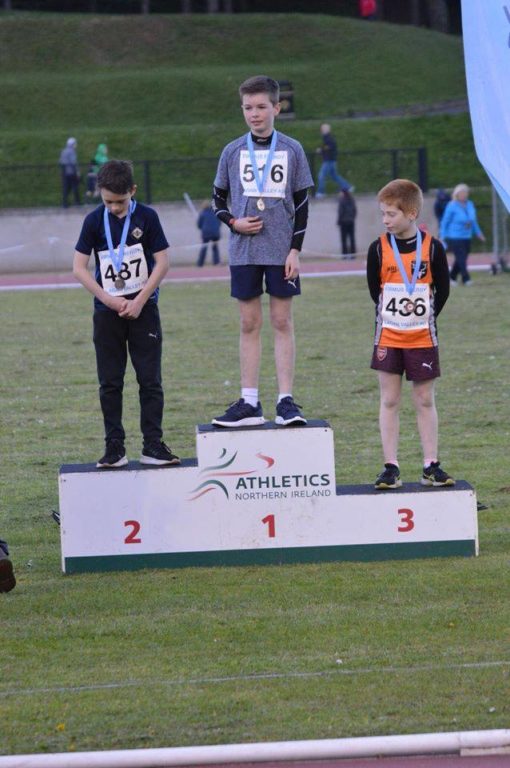 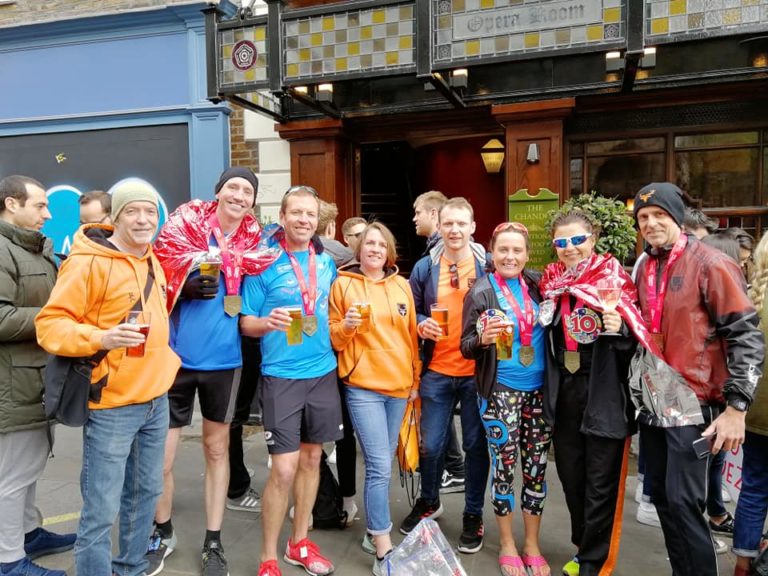 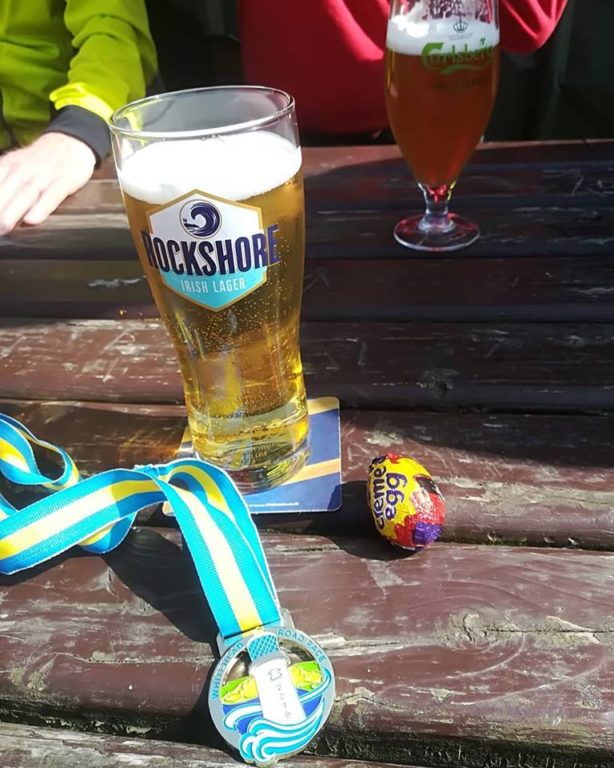 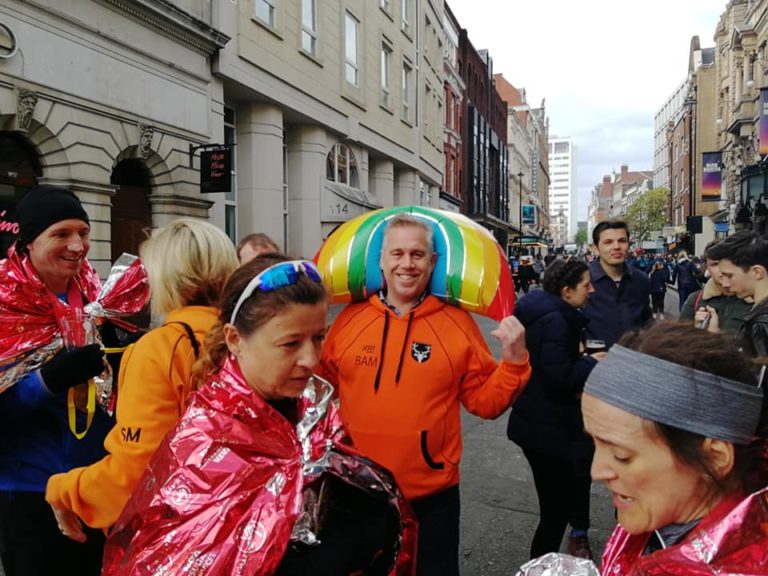 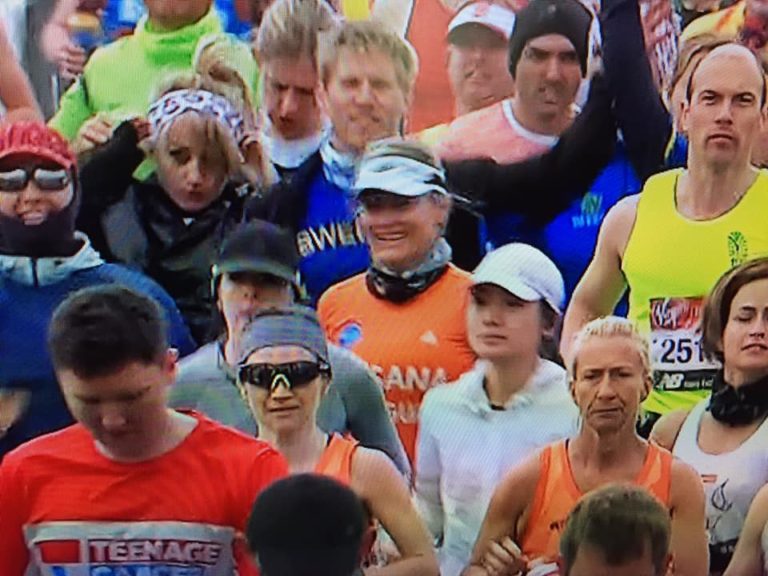 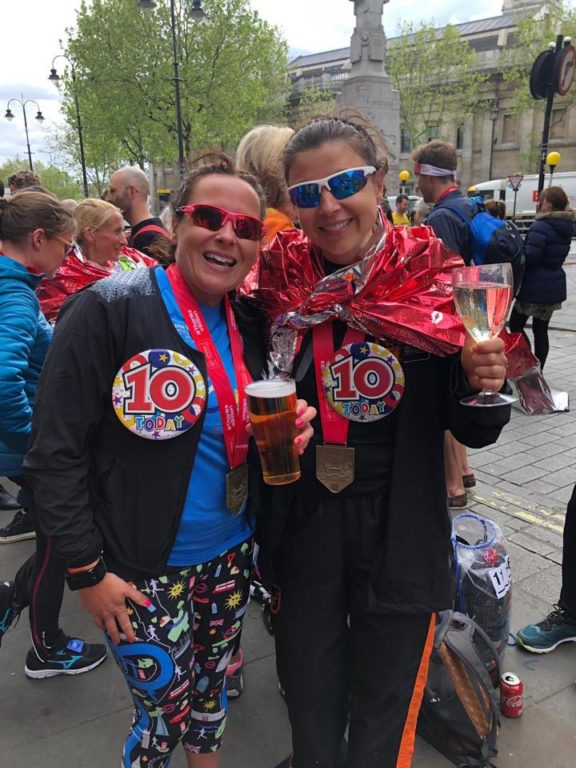 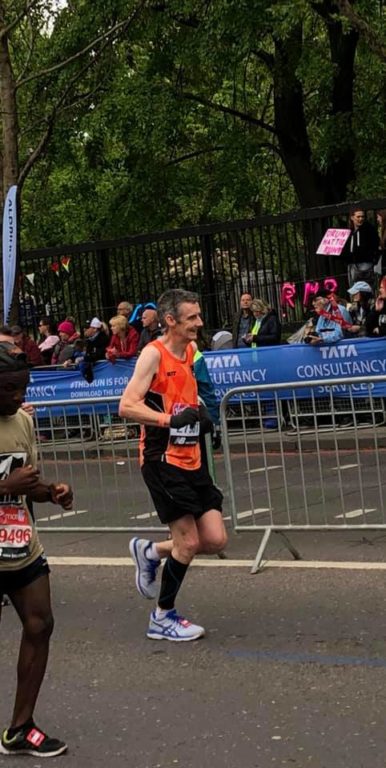 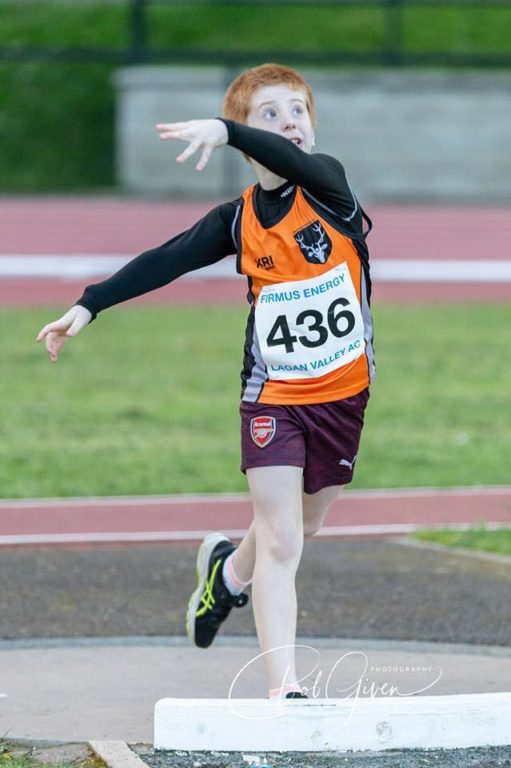 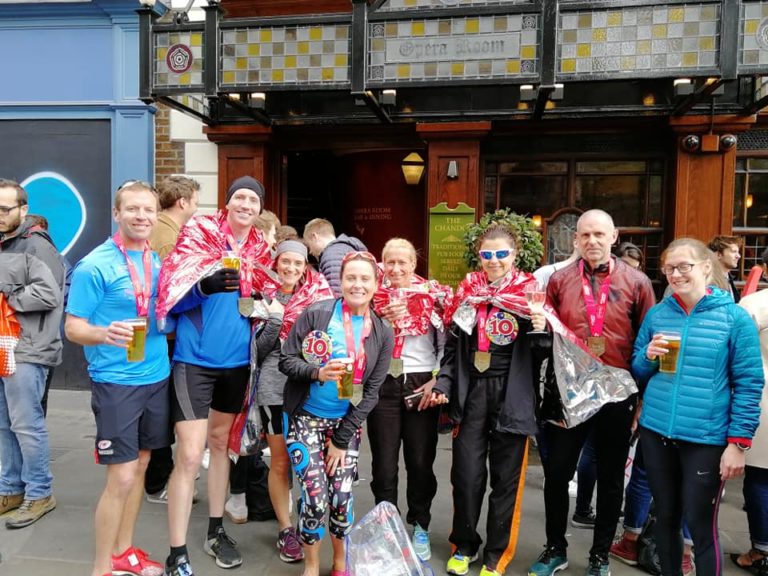 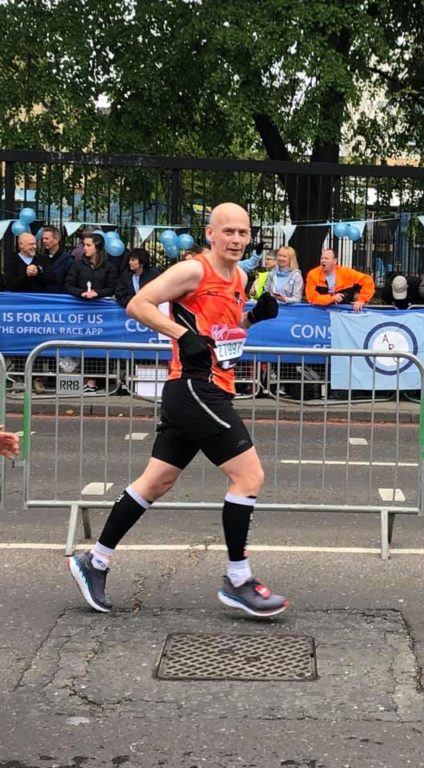 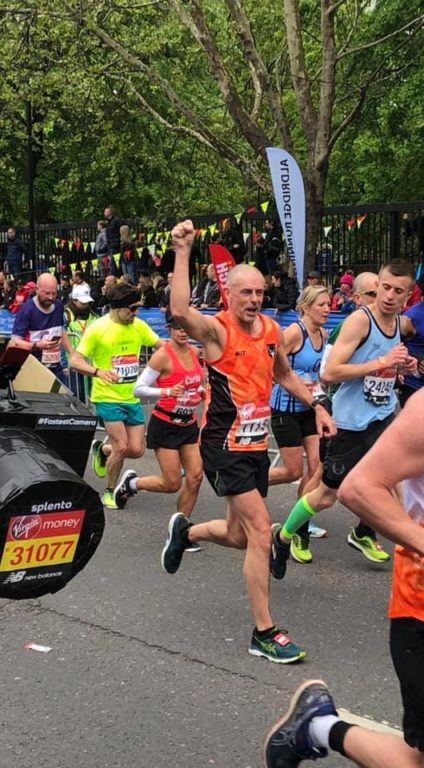