PARKRUN, 25th & 29th December 2018.
25th December.
On arrival at Stormont the weather was so mild it could have been October and the Mo Mowlam Play Park had been reduced to a muddy building site, not very festive. However, there were a lot of people in Santa outfits gathering for the start and the finishing tunnel was brightly decorated. The Mags Mathieson refreshment table offered tea, soft drinks, chocolates and mince pies. Yes, it really was Christmas Day.

There were nineteen OAC runners at Stormont, four at Orangefield and one each at Waterworks and Bangor. Only Reg Sanlon ran in two events. Ian Grant completed his 100th parkrun at Stormont.

Well done to Jackie Grant who achieved a PB time of 27:17 at Stormont and to Colin Sykes and Reg Sanlon who ran PB times of 25:11 and 26:15 respectively at Orangefield.
29th December.
The weather continued to be unseasonably dry and mild for the final parkrun of 2018. The following were inspired to run a PB time: Tom Smith, 22:37, at Stormont; Catherine McIntyre, 25:49, at Victoria Park; Reg Sanlon, 25:54, at Orangefield and Martha Orr, 30:34, at Victoria Park.

Thanks to all the volunteers who turned out so the rest of us could run and remember to help out when you can in 2019 by contacting: belfastvictoriahelpers@parkrun.com

CIYMS BOXING DAY CHARITY RUN, 26th December 2018. [Thanks to Jim Harris for his comments]
This year the charity run (5K) was almost all within Belmont Park, so there was no need for a race permit or traffic management plan and the Belfast City Council even swept the route beforehand. At least a dozen OAC members were set to run. One hundred and seventy runners took part on the day, raising over £1500 for the N.I. Children’s Hospice.

33rd GREENCASTLE 5 MILE ROAD RACE, 26th December, 2018.
Three OAC runners made the trip to Greencastle in the scenic foothills of the Sperrins, between Cookstown and Omagh. Though the start and finish are downhill, the signature feature of the race comes after three and a half miles, a tough half mile of uphill to test of the mettle of every runner.

A well placed source informs me (every year) that this is a brilliantly organized event with good car parking, comprehensive timing data, and generous prizes – three for every age category. Also, there are great post-race refreshments. All for an entry charge of £12.

The race was won by a dominant Mark McKinstry (North Belfast Harriers) in 24:42 and first lady was Emma Mitchell (Team Nike) in 28:29, 13th overall.

St. STEPHEN’S DAY BURREN TOWNLANDS 12 MILE RUN, 26th December 2018. [Report by Michael O’Donoghue]
Organised by Burren AC, the Burren Townlands Run is an annual boxing day event that involves the whole community of the village of Burren and the surrounding area near Warrenpoint. The area itself is on the foothills of The Mournes, and it certainly felt like a mountain race in parts with at least one hill every mile through both the 6 mile and 12 mile courses. In fact I would struggle to think of any road event for that distance that has that much climbing in it. The 12 mile route circles the nearby hill of Ballydesland before continuing through miles of drumlin to the finish at the local heritage centre.

There was a strong field of local runners in the event, and experience of the nearby hills would definitely help getting round the course. Starting the event, I was a bit worried I would be last! Thankfully I managed to keep at a steady pace and finished with a time of 1:39:42. The club record for the current course was broken by Wesley McDowell (Dromore AC) with a time of 1:12:53 and first lady was Ciara Coffey (Newry AC) in 1:28:17.

The race was won by John Black (North Belfast Harriers) in 25:57 and first lady was Katy Williams (Unattached) in 30:35.

35th CASTLEWELLAN CHRISTMAS CRACKER, 29th December, 2018. [Report by Brian Todd]
On the 29th December, 2018, all running roads led to Castlewellan, Co. Down, for the annual ‘pairs’ Christmas Cracker. It was a magnificent day for running. The weather was mild, dry and even sunny at times. Underfoot conditions were as good as they could have been. There was very little mud and the going was far from tough. The organizers try to vary the route each year. There were a few problems last year with unmanageable mud and a particularly annoying bottle neck which made a nonsense of times. Not this year. The course planner had come up with a very pleasant manageable route (8.5 miles) which sported a variety of terrain….track, trails, meadow, tarmac and some lovely hilly climbs which included a trip to the summit of Slievenaslat (272m). It was a pleasure to partake.

The Christmas Cracker is like no other race. You run in pairs, which can be all male or all female or mixed. Your likelihood of winning a prize is down to your finishing position and the combined total of your ages. However, for most of us it is just about a bit of fun and getting into the hills in the day or two after Christmas. Fancy dress is almost obligatory and there are prizes for the best, but the older brethren amongst us tend to simply don running gear and get on with it. There were not as many OAC pairs this year as in previous years. Nevertheless, the Club was well represented by the following:

EAMS CARRICKFERGUS MARATHON, 30th December, 2018.
Michael O’Donoghue took part and though I have not seen official results, his Strava post shows a time of 4:27:05 and a photograph of his medal. The race route was between Carrickfergus and Whiteabbey. 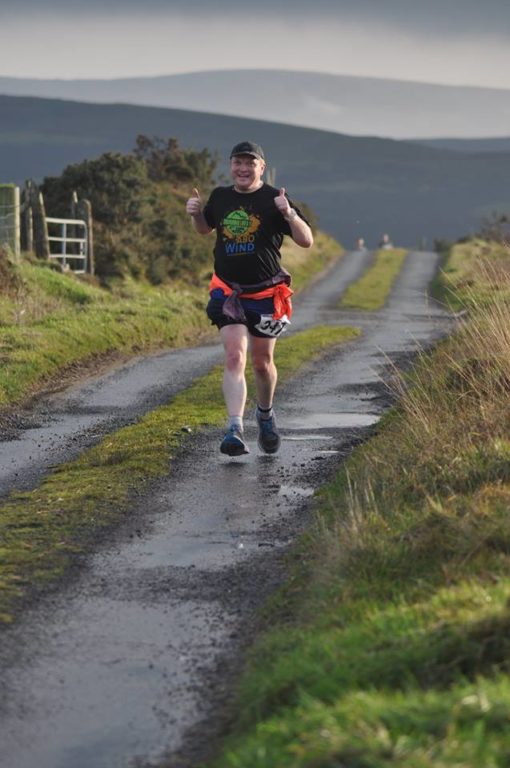 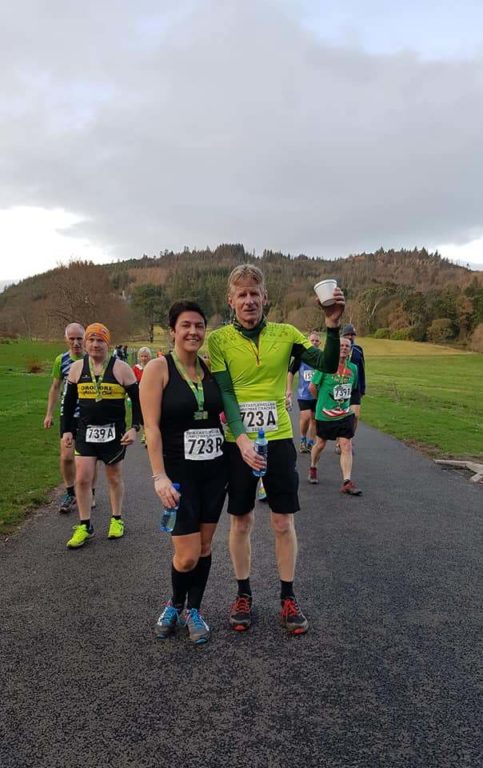 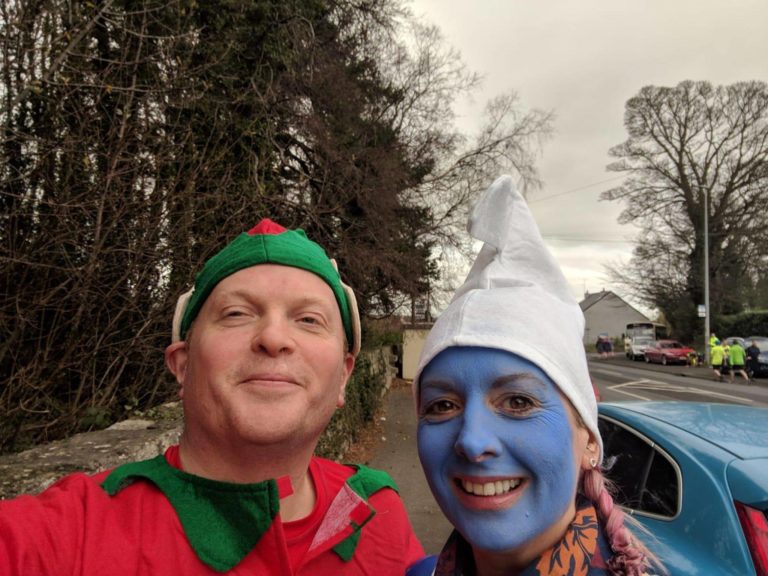 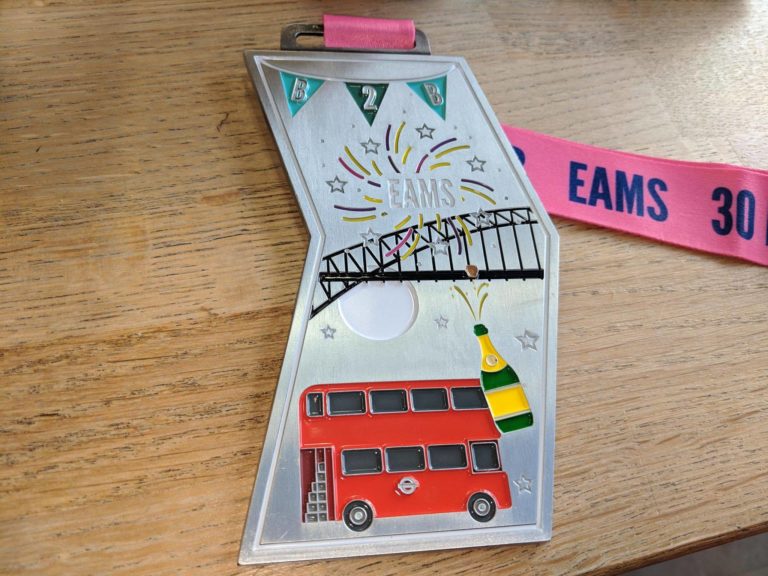 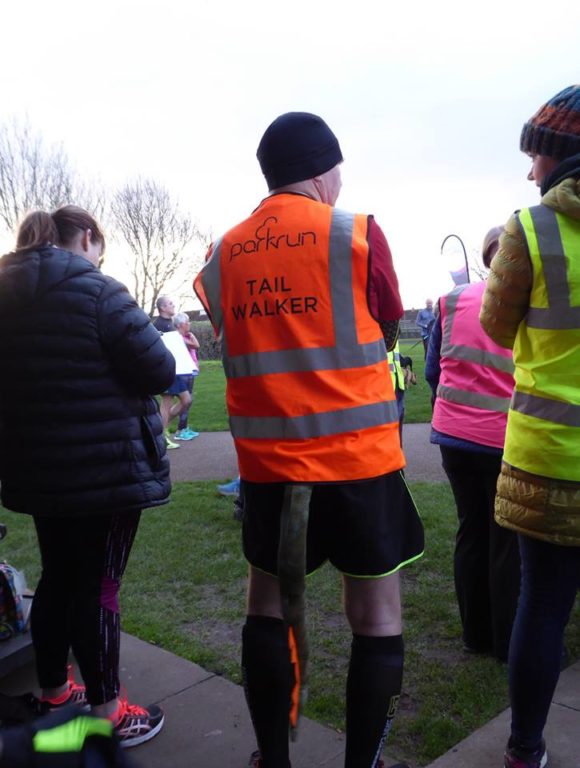 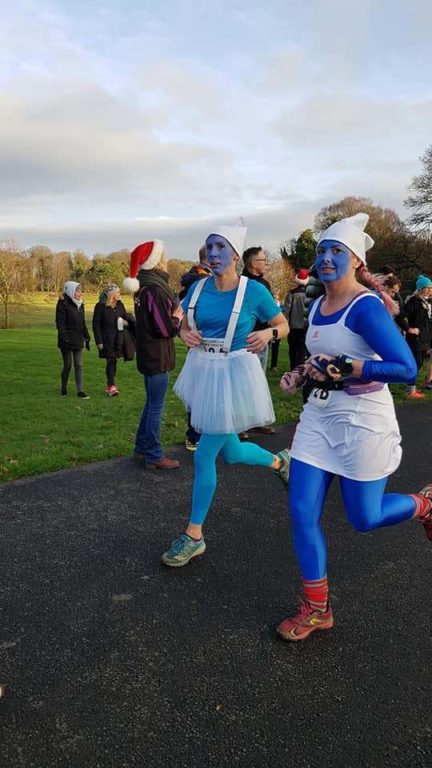 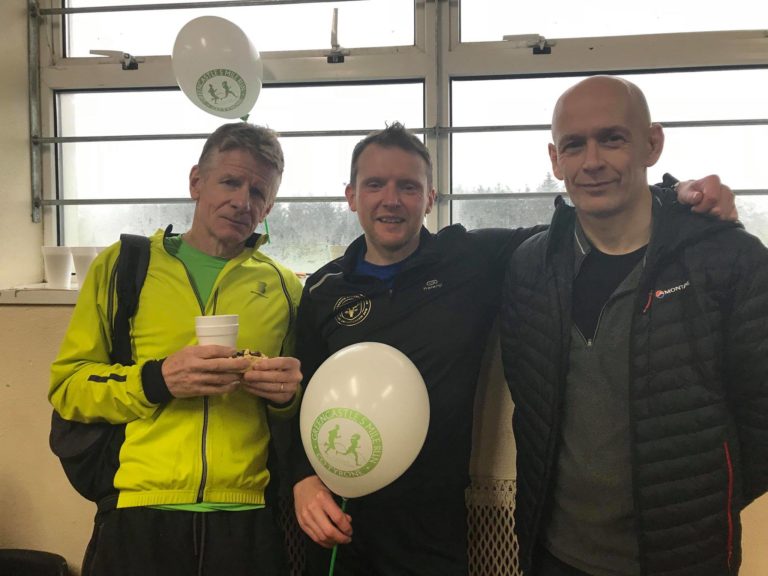 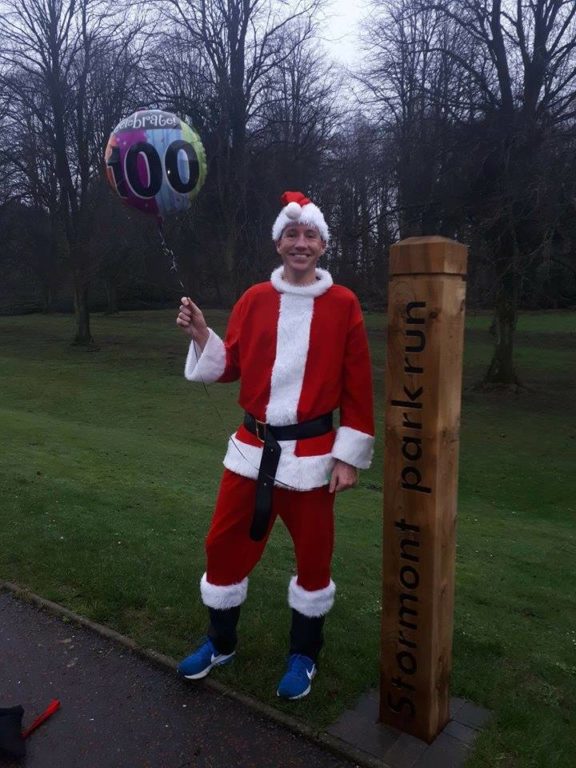