After the marathon heroics of Belfast, the majority of the club was taking a well earned break. However, the Orangegrove reporting team ensured that there was no shortage of material by enthusiastically (or dutifully?) toeing the line at various races around the province over the weekend. Many thanks to Gerald, Brian and Michael for their contributions to this week’s report.

‘Run the Runways’.
Newtownards Flying Club, Friday 10th May, 2019.
Report by Brian Todd
A number of OAC members gathered at a sunny Newtownards airfield for this unusual series of races hosted magnificently by the local running club, Scrabo Striders. There were a number of distances available, a 1k ‘funrun’, 5k and 10k. All the races were on the runways and aprons of the airfield. The wide main central runway has a number of shorter feeder runways and taxi areas. For the two longer distances all available runways were utilised to make up the distance with some sharp turns at each end. The 5k required one lap of the course and the 10k two laps. Inevitably, inclines were not an issue although the sharp turns required care and tended to eat into times. There was a slight breeze too which affected some parts of the course. The rather featureless aspect of the airfield was also a slight issue in that there were no distractions to take one’s mind off the pain of trying to run as fast as possible. Nevertheless, conditions were perfect, dry and sunny, and it was a pleasure to explore the extremities of the airfield in this novel and innovative way. The 5k race was a round of the Baker-McKenzie Super 5s series so Brian Todd, the writer, plumped for the shorter distance as did Ross Robinson. Jenny Powell, Elaine Weston and the indomitable Michael O’Donoghue chose the longer distance. There was music round the course, the skirl of a lone piper and much food at the close of the running bit. All in all, a great evening, a memorable series of races and superb hospitality from the host club. The following results were achieved by OAC Members…
5k
Ross Robinson…19.39
Brian Todd…20.19
10k
Michael O’Donoghue….42.03
Jenny Powell…51.50
Elaine Weston…52.50
The 5k race was won by Gareth Lyons (North Belfast Harriers) in 16.12 and the first lady was Ann Terek (City of Lisburn AC) in 19.04.
The 10k race was won by Ross Moore (Saintfield Striders) in 36.23 and the first lady was Amanda Perry (Ballydrain Harriers) in 40.25.

Slieve Donard Race
Saturday 11th May
Surely one of the longest-standing races in the Northern Irish calendar, the Slieve Donard race took place for the 74th time on Saturday 11th May. The course has seen different variations over the years, but traditionally it has always started from outside the Newcastle Centre on Main St. From the start, the route led up the Glen River path to the first checkpoint at the saddle, then on to the main goal of Donard summit. From the top, runners had to negotiate the steep descent down the ‘front side’ of the mountain to the third checkpoint beside the quarry at the top of the Granite Trail. From there it was free reign to find the fastest route down through the forest to finish on the playing fields of Donard Park.
This year the race was not part of the NIMRA championship, but it was the first race in the Irish Championship, so a large number of IMRA runners had made the trip from various parts of the island (mainly Dublin) to compete. The weather was fine on the day, but wet conditions in the preceding weeks meant that the conditions were still boggy underfoot when off the main trail.
Newcastle AC’s Seamus Lynch continued his dominance of Irish mountain running, winning the race in 56.50, almost 6 minutes ahead of second place. Esther Dickson of Newry AC was first lady, and 10th overall, in 1:05.42.
For Orangegrove, Andrew Tees finished in 1:07:01 for 17th/167.

Downpatrick Lions 3 Lakes Challenge 15K & 7K
11th May, 2019.
Report by Gerald Harvey.
In the 7K race, it was gradually uphill almost from the start to the left turn into a leafy minor road, then undulating through deepest countryside, until the right turn onto the Buck’s Head Road hill. Unlike two years ago, I did not grind to a halt this time – honestly! The top of the hill is the highest point on the course (31m). With that little local difficulty overcome, it was an easy run to the halfway point and water station at the right turn into Drumcullan Road (the 15K race went straight on towards Loughinisland Lake). Getting some water helped and it continued to be an easy run for the next 2K, passing the northern tip of Magheralagan Lake where a really nice house sits close to the water. After the church in the last 1.5K, there is an uphill drag that hurts a lot more in the longer race. The hard work is done when you see Ballydugan Lake through the trees on the old railway embankment, prompting a downhill sprint to the finish in the car park opposite the quaint Lakeside Inn.
Downpatrick Lions Club and Atlas Running organized the event with proceeds in aid of Mainstay DRP, a local charity that provides supported living and respite care for people with learning disabilities. ChampionChip Ireland did the chip timing. The marshals were very good and a reassuring presence all around the course. The PSNI were out on the roads as well. Unfortunately only 114 runners in total showed up this year for the two races. Come on Orangegrove AC, we should be doing this!
The 7K race was won by Nigel Greer (Dromore AC) in 26:39 and first lady was Lorna Chambers (Murlough AC) in 31:08, 5th out of 51 runners. Gerald Harvey (Orangegrove AC) was 15th in 35:00.
The 15K race was won by Gareth Lyons (North Belfast Harriers) in 52:44 and first lady was Roberta Dornan (North Down AC) in 1:08:02, 11th out of 63 runners.

Carrickfergus Marathon
Saturday 11th May
Report by Michael O’Donoghue
We Run Wild is a new local organisation that aims to offer something a bit different for local runners. It takes some ideas that have been tried elsewhere that the organisers, who have done a lot of ultras, have found adds to the experience. I first heard about their ventures when they announced “On the Run from the Crum” a 24 hour self-navigating race which is based upon an English event, Escape From Meridan.
The Carrickfergus Marathon on Saturday 11th May was their first event. The idea that made it different from other local events is a “road book” where instead of a marked course, or map, you’d have written directions at each junction indicating the way to go. The route started in Carrick Castle before climbing up through minor trails all the way up into the hills towards Woodburn Forest and Reservoir before heading back down.
It was an unusually hilly course for an event that starts in an urban setting, totalling over 2000 feet of climbing. Much of it was trail though, and it made extensive use of Woodburn forest, meaning that overall it was as much trail as a number of events in The Mournes. It was a mile long, which nobody seemed to mind. After Belfast last week everyone is an ultra runner now! It would have been very difficult to mark an accurately measured course on that terrain in any case!
It was a familiar sight at the start of the race, with many curious ultra runners from all over Ireland and England. The winner was Bobbie Irvine whose time was 3.56.49. First lady was Fiona Prue (4.43.51) My time was 5.46.27 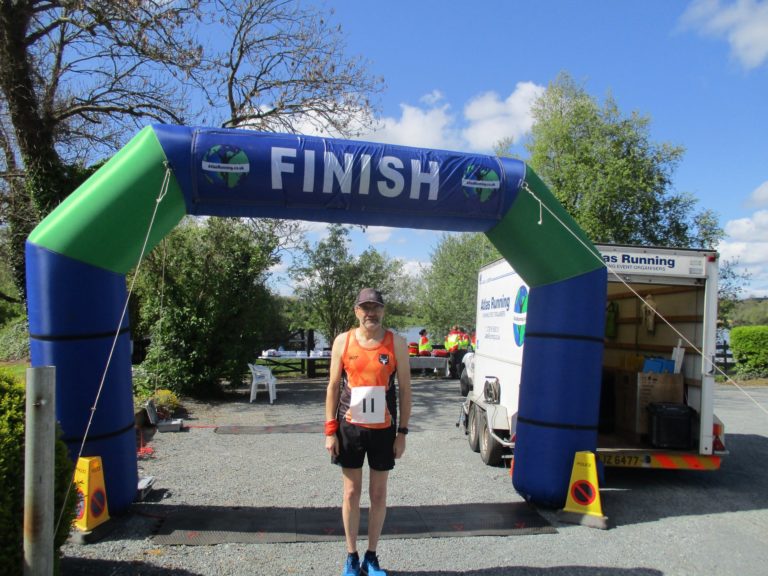 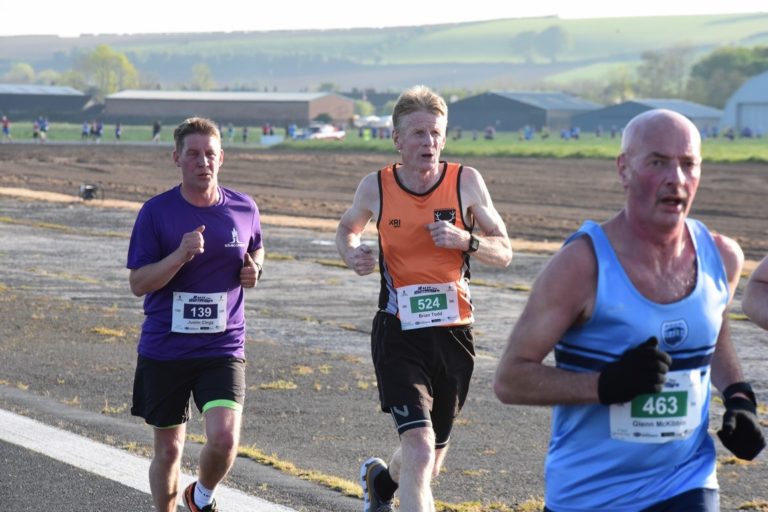 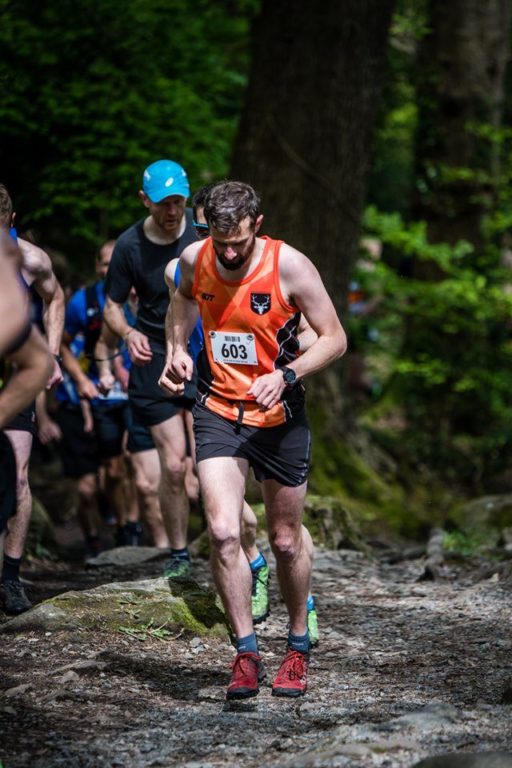 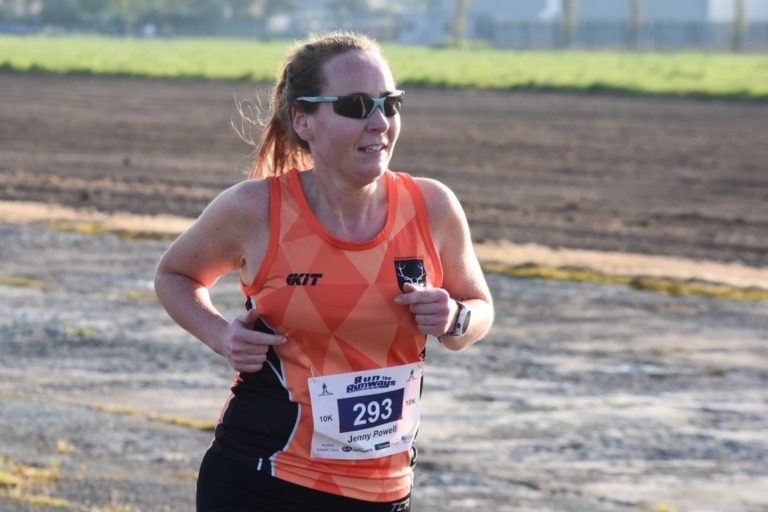