This is certainly one of my favourite races and not because it is an easy race. It is certainly not that. There is the impression of considerably more incline than decline and even the downhill bit along Spring Lane has an incline! That long old drag along the Newtownards Road to the finish is challenging too. It is one lap for 5k and two for 10k. I enjoy the atmosphere of this race more than anything. It is a Friday evening race, there is always a warm local welcome, it is run for a good cause too with a local element (the Helping Alopecia Trust), it is small scale, the route is scenically attractive and there is always a substantial supper at the end of one’s exertions. Such races are at the heart of local running, but maybe not for too much longer. Before even an entry fee was collected the organizers had to pay out over £800 for a traffic management plan and a permit. Had they been unlucky with the weather and only a few competitors turned up a loss would have incurred. Whether it is worth the effort remains to be seen. There are probably easier ways to make a few pounds for your local charity. Hopefully the race will continue to be run and that this running was not the final one.

Orangegrove was represented in the 10k by Andy McIntyre, David Gribben, Darren Houston, Brian Todd and Sarah Wilson, her first race back after injury. Verity Cornford and Steven Gilliland were there too, taking on the shorter distance. Conditions were near enough perfect. It was certainly dry, if a little dull. However, the temperatures were high and this certainly impacted on times in general.

The 10k race was won by Steven Wylie (Victoria Park and Connswater AC) in 34.18 and Debbie Matchett (Ballydrain Harriers) was first lady in 41.14.

The 5k race was won by Glen Taylor (Ballydrain Harriers) in 16.34 and Sarah Jane McFadden (North Belfast Harriers) was first lady in 19.28.

Scafell Pike in the Lake District is the tallest mountain in England. It’s in the centre of traditional fell running country where it is surrounded by dozens of smaller peaks. Although the majority of events in the area are pure fell races, this event was a traditional trail race with a bit more climbing than most, some 5000 feet.

The event started on the edge of the pretty town of Keswick, going along the lake of Derwentwater through the Borrowdale Valley and up into the mountains around Scafell and back down via the rocky mountain Great End. It was quite technical in a few sections and the top of Scafell Pike itself is very rocky, making running quite difficult. The biggest challenge in the event was temperature though. It was approaching 27 degrees even in the mountains and most of the rivers had dried up, meaning a tough day out!

No doubt due to the fine weather and extended daylight hours it was also peak season for those attempting the iconic Bob Graham Round, a brutal mountain challenge requiring athletes to climb 42 peaks totallying 74 miles and 28500 feet in under 24 hours. I saw the record in the process of being broken by Killian Jornet who did it in 12 hours 52 minutes.

Ardboe, Co Tyrone, on the banks of Lough Neagh, is not the sort of place you might come across by accident. It is very remote. If you should ever find yourself in Ardboe it might be the result of business, curiosity, a romantic liaison…….or, possibly, The Great Rossa Run. This is a really big event, one involving a massive local community effort. Over 700 runners turned up on the day.

There were three distances available, half marathon, 10k and 5k. Organization and marshalling were very slick indeed. I chose the 10k race, having been at Greyabbey only thirty-six hours earlier, although I think I saw Lyndsey Tyro setting off on the half marathon route. All routes involved the myriad of narrow and very lovely rural roads surrounding the village. Temperatures were high, although the sun made only fleeting appearances. However, there were water stations round every corner!

The 10k route was not particularly flat and it had a sting in its very substantial tail…..the so called ‘Endless Mile’ uphill to the finish. If you were on target for a personal best at the end of mile five, the chances are that you probably didn’t achieve it. Post-race hospitality in the village hall was superb. In my case it involved a breakfast of sausages and bacon and as much of the usual stuff you could consume. In addition, there were ice baths available, massages, ice lollies, hot dogs, fruit and as much water as you would wish to drink. I noticed a few competitors with glasses of something more exciting, and I was tempted. I will most certainly return. It was definitely worth the long drive and the not very straightforward route to this part of Co.Tyrone! 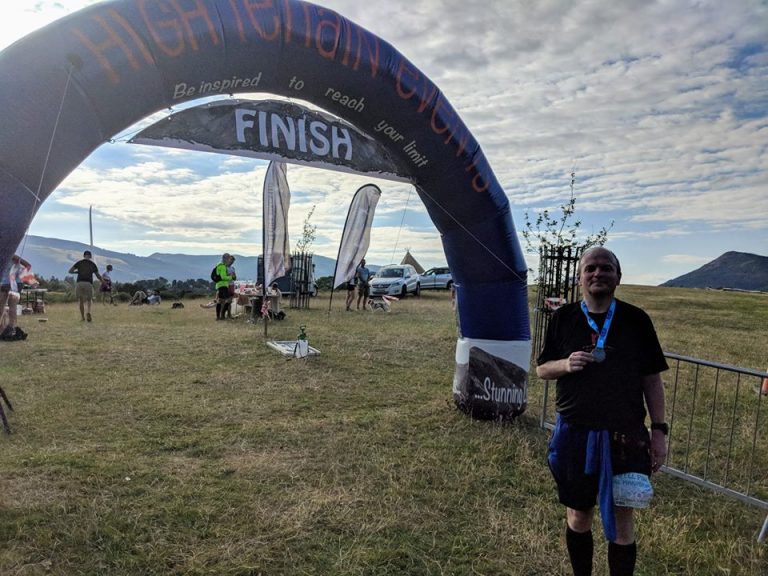