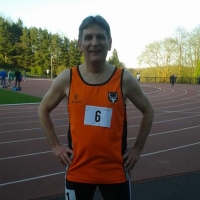 Sprinters were in action last Tuesday night. The first race of the night was the women’s 100m and competing for OAC were Sophia Campbell and Lucy Armstrong who finished 3rd and 4th respectively with times of 13.68 and 13.89 seconds. The race was won by Megan Marrs (City of Lisburn AC) in 12.06 seconds.

In the men’s senior 100m, George Gribben (masters athlete) ran an excellent time of 15.36 seconds in only his second competitive event. The race was won by Craig Newall (BAAC) in 11.36 seconds. Track running is not easy as I have found to my cost, so well done. [Thanks to Alan Martin for his report]. 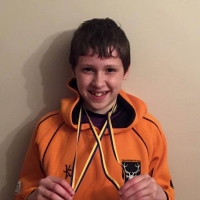 Sam Rainey, Jacob McKittrick, Olivia Chandler and Matthew Sykes competed at the North Down AC track event in Bangor. Fantastic, gutsy, performances from everyone on the night and they brought home some bling.

[Thanks to Gillian Sykes for this report.]

QUEEN’S ROUND THE RIVER 3/5K

Fifty five Orangegrove runners made it to the start line and did indeed fill the lens with orange. The start was timed by digital watch on the sound of the horn, so those starting at the back were at a definite disadvantage. The first mat at the finish displayed the names of the runners for the commentator, but it foxed the race leader who stopped there rather than at the correct second timing mat, losing valuable seconds. The third mat was for backup timing. Therefore, you should always run hard to the final mat.

The race was run over the old monument course which crosses the Shimna River twice within Tollymore Forest Park and takes in the Mournes Way and the higher mountainside, with a trademark uphill finishing stretch.

This scenic course is approximately 7K in length with 293m of ascent. Well done to all six members who took part. The race was won by Zak Hanna (Newcastle AC) in a time of 30:28 and first lady home was Gillian Wasson (Ballymena Runners) in a time of 36:10. 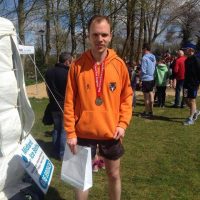 The half marathon distance comprised four laps of a flat 5.2K course, centred on the Royal Canal.

Andy McIntyre was there to represent the club, which he did excellently, with a personal best time of 1:21:03 for second place. His first lap was under 21 minutes and his next three laps were all under 20 minutes.

After the uproar over the Bristol parkrun recently, I am glad to say that council authorities here appear to be supportive of the parkrun ethos and long may that continue. Orangegrove runners were all over the country last Saturday – Antrim, Belfast, Bangor, Portrush, Edinburgh, Northampton and London (Finsbury & Mile End).

Remember to support parkrun by volunteering when you can. Contact: belfastvictoriahelpers@parkrun.com

British astronaut, Tim Peake, started the race from the International Space Station and ran a marathon on treadmill in 3:35:21. Back on Earth nearly forty thousand people took part in the race, among them was Stephen Anderson who appeared on BBC TV looking composed at Cutty Sark.

In the unavoidable absence of Emma McWilliams and Antra Balcuna, the only OAC representation at today’s sprint duathlon at Kirkistown Motor Racing Circuit was from Brian Todd and Michael O’Donoghue. Sprint duathlon involves an initial two mile run, followed by a ten mile bike ride, followed by a final two mile run. There are strict rules regarding what one can do and not do in the transition area, where the race can be won or lost.

Sprint duathlon is easier said than done, particularly when the wind is blowing into your face at 15mph for half of every 2 mile lap, affecting the bike ride considerably. Conditions today were at least dry and sunny, but that wind was a problem and enervating to say the least. Brian Todd finished the race in 1:01:25 (19/29) and Michael in 00:56:11 (10/29). However Michael seems to have miscalculated the bike ride and completed only eight miles instead of ten, although the timing mats did not notice. So, keep it quiet! Shhhhh!

Sprint duathlon is dominated by cyclists who can run a bit. It is unusual to come to it, as we do, as runners. We tend to make a lot of ground on the run, but lose it dramatically on the bike ride, not helped by the fact that some of the cycles in use are at the very upper end of the price range. Nevertheless, great fun and it certainly adds an extra dimension to the sometimes tedious activity of just running. If anybody else would like to give it a go, contact Brian. [Thanks to Brian Todd for his report].