This weeks racing takes us up hill and down dale, across all kinds of terrain and even to a place far, far away. For some of us it was past a significant landmark.

Castlewellan Forest Park is home to all sorts of outdoor activities with its lake, maze, play structures and forest offering 27km of scenic mountain bike trails, walking trails and a permanent orienteering course.

Thursday evening saw 257 athletes arrive to take part in the first race of this year’s Hill & Dale Series, an increasingly popular race Series hosted by Newcastle AC. The race covered approximately 5 miles with 900ft of ascent (and descent – Race 4 finishes at the top of Binnian).

The Castle Ward Estate, owned and managed by The National Trust, was the setting for the 5th Annual Castleward Challenge Half Marathon and 10K Race/Walk, organised by the Born2Run team with their motto Great races in great places.

The start line was in the shadow (yes, the sun was shining) of the 18th century Castle Ward mansion and runners enjoyed a tour through the estate which is combination of forest trail, open pastures and shoreline paths along the banks of Strangford Lough.
Orangegrove was represented by four runners in the 10K race, supported and photographed by Linda Carson-Craig.

Castle Ward has known a little controversy in the past: a difference of opinion between husband and wife regarding the style in which to build resulted in one half of the house being built in a classical style and the other a Georgian gothic. The GPS watches were not in agreement on Saturday with most reading a distance in excess of 10K but there seemed to be consensus that the event provided a great day out.

The results were as follows: Martin Melville (Newcastle AC) took the win in 00:37:12. Murlough AC’s Niamh O’Connell was first female across the line with a time of 00:47:45

And for the club:

On Saturday evening, Brian Todd and Gerald Harvey headed south and out of the jurisdiction to Dundalk (Brian’s home town) for the Patsy Kelly 5k road race.

STAR WARS 10k and Half Marathon 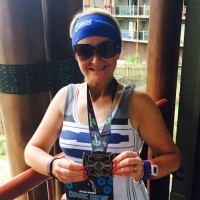 I’m not sure it was the only reason for the trip, but Saturday saw Jill Long taking part in the Star Wars 10K, Florida. In true Disney style:

“The Star Wars 10K is packed with 6.2 miles of running excitement. The thrills begin at Epcot® where you’ll wind your way through Future World and World Showcase, then on to Disney’s Hollywood Studios® running down Hollywood Blvd and on to the ESPN Wide World of Sports for an exciting Star Wars 10K finisher celebration”

The results list a time of 1:03:55 which reflected some lost time as a result of a battle with the storm troopers and an unmissable photoshoot with Darth Vader.

Not satisfied with 10k?

Jill took up that challenge and succeeded, completing the Half Marathon in a time of 2:44:06 to bring home all 3 medals. 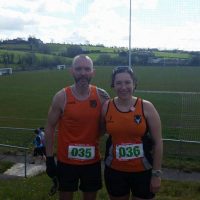 On Sunday, this “very, very undulating course” in County Tyrone saw a second race of the week for Sharon Dickenson and Darren Marshall… and Sharon claims to be coming back slowly! This time the undulations followed a bitmac route and was Sharon’s first road 10k in a year. Darren was reported as having a fab run. Results were not available at time of writing.

Following Thursday’s Hill & Dale, Michael O’Donoghue headed across the water for Plymouth’s Half Marathon, running Pymvalley parkrun while in the vicinity. The Half is billed as a stunning and varied run; coastal views, charming harbour and the beautiful National Trust grounds of Saltram Park, as well as the iconic Plymouth Hoe, where Sir Francis Drake played bowls!

I understand that Eric Fairfield, VerIty Conford, Rachael Woodman, Paul Woodman, Alan Montgomery, Robin Montgomery, Stephen Anderson and Ian Reid took part in a fundraiser event for the MS Society at Crawfordsburn Country Park on Sunday. With an eye on marathon training, Robin, Stephen and Eric, and perhaps a few others allowed the race to form part of a 10 mile run.

Deborah Killen ran a new PB at with 35:27, joined by Trish Magill with a 25:14.
Owen Powell ran his first Victoria Parkrun with Orangegrove, running a 30:26.
Lyndsey Tyro ran her 100th parkrun with another good sub-20.

Meanwhile, in other locations: