This week’s activities range from coastline and riverside to mountain top with club participation as far afield as Colchester. We have a number of significant achievements throughout the Club too, so, warm-up complete; let’s go.

As the cross country season ends, this race, organised by Armagh AC, marks the start of the hill running season.

The race is described as a short race, covering around 3.9 miles, over a fairly well defined route, suitable for athletes of all standards. Add 340 metres of climb over the distance, mixed terrain including challenging technical sections, a pre-race hail shower standing in your race vest and shorts, and you have the first mountain race of the year.

Weather conditions during the race seem to have been good, but there was plenty of mud around as evidenced in the excellent photos by Jayne Bell, available via the informative NIMRA website. The 85 competitors included our very own Sharon Dickenson, an experienced and enthusiastic mountain expert.

The race was won by Jonny Steede who led from the start, with Newcastle AC’s Mari Troeng first over the line for the ladies. The full results were not available at time of writing but Sharon’s smile says enough!

I have only taken part in two mountain races, both at the tail end of last year, but the reports and photos have left me excited by the prospect of getting out there again this year. 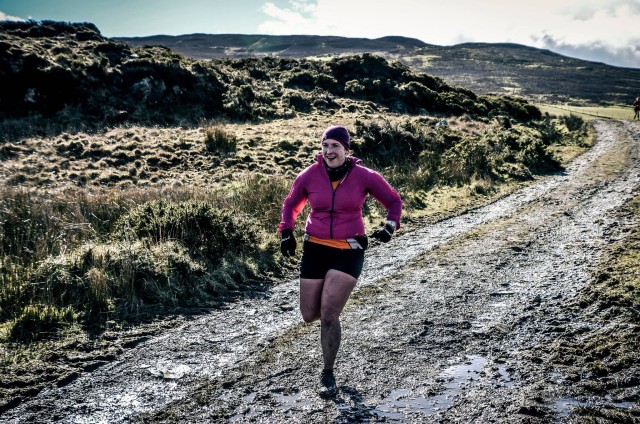 CARLINGFORD HALF MARATHON AND 10K

Travelling a little further south, the Carlingford Half and 10k races were organised by 26Extreme again this year with the race in aid of St. Brigids Special School in Dundalk.

The Half Marathon began in the picturesque village of Carlingford, taking in the beautiful surrounds of the Cooley peninsula, Ballagan Point, Mourne Mountains & Carlingford Lough, finishing back in Carlingford.

The 10K race followed a shorter loop finishing along the same route into the village.
The organiser’s description added: “… a few small hills along the route but nothing major!”

Sarah Malcolmson was the only Orangegrove member to take part in the 10k race, reporting that, “it was a beautiful crisp sunny morning and it was actually quite hot when we were inland. The first 3 miles were slightly hilly – gentle hills but quite a few of them. The final 2 miles were flat but the headwind was brutal. Pleased to have finished just under the hour (59:50) – that was my goal.” Great work.

Andrew McIntyre finished in a very impressive 21st place of the 636 competitors who took part in the half marathon with a time of 01:24:05, having had a great day apart from the brutal two miles into the strong head wind.

Michael O’Donoghue, having completed 62miles in training last week, completed his first Half since Dambusters with an excellent Personal Best of 01:33:43 – an improvement of some four minutes!

The course was billed as a radically improved course this year and is considered to provide good preparation for the Walled City Marathon on June 5th and the Larne Half Marathon on March 19th.

Unlike the Bay Road 5k last year, the route took great advantage of the River Foyle. Starting at Ebrington Square, running out via St Columb’s Park and the Waterside Greenway to cross the Foyle Bridge, the course continued for four miles inland along the Foyle past the beautifully restored Guild Hall and the Craigavon Bridge. The route then doubled back along the Foyle Road to cross the Peace Bridge, with a fairly sharp climb back up to Ebrington Square.

Following a warm-up parkrun in the Maiden City, Chris Downey, our sole representative at the Walled City 10 Mile Challenge this year, achieved an impressive time of 1:07:27, finishing well up the results table at 42nd out of 311.

The race was won by Gideon Kimosop of Project Africa Athletics, who many will remember from our Kenyan style training session at Grosvenor Grammar School (and who could forget the delayed onset muscle soreness!), with a time of 0:50:04; Natasha Adams, Letterkenny A.C., was first female across the line with a time of 0:57:51

Mark Williamson was in Merseyside this weekend with his visit taking in a rugby match at Langtree Park. Mark even made a special appearance on the pitch – as part of the St Helen’s 10k.

Mark pointed out that the race was started in 2011 by St Helen’s ex rugby league player Steve Prescott. Steve got a rare form of cancer in 2006 but still managed to raise £500,000 for charity through taking on extreme running, cycling, rowing and swimming events and was made an MBE. Unfortunately Steve passed away in 2013 but his charity still lives on.

The race started and finished at the Langtree Park rugby league ground, following an undulating course in cold but dry conditions. The 1711 finishers included Steve’s wife. Mark finished 197th in a time of 0:45:04. 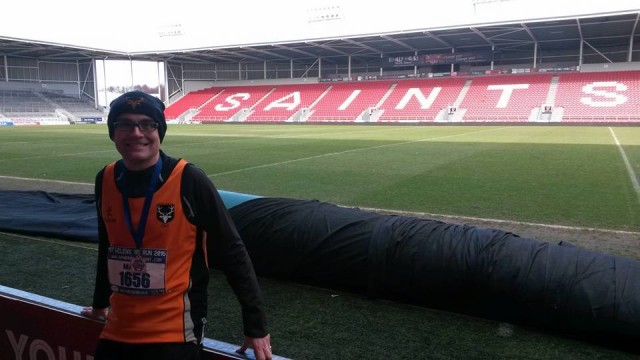 Our first special mention goes to the speedy Paul Woodman who was second across the line in Bangor on Saturday with a time of 18:22 to complete his 100th parkrun. Congratulations Paul.

Anne Devlin achieved a new PB at Belfast Victoria with a time of 00:29:20.

The Stormont course saw a significant number of PB’s this week, possibly, though not necessarily, as a result of a reduction in the course length to bring it down to a corrected 5k distance. Orangegrove took first and second female across the finish line with great runs from Lyndsey Tyro (00:20:21) and Jill Holland (00:23:12).

Emma McWilliams was first female across the line at Colin Glen (00:23:47)

Linda Craig represented the club at Colchester Castle with a time of 00:27:31

The great attitude and friendly smiles of those who help out make it appear as if it is no trouble but there is an ongoing need for volunteers to help lighten the load. Find out what you can do to help by contacting Gerry at belfastvictoriahelpers@parkrun.com

Thanks to Jane Bell (NIMRA) and Davy O’Brien for the photos.