When OAC’s most highly esteemed scribe, Brian Todd, suggested that I join the writing pool for the weekend report, I felt I couldn’t say no (I must be particularly susceptible to his sweet talk). Apparently he thought it would be a good idea to have a ‘newbie’ on board to mix things up a bit. I’ll leave you to be the judge of that…

This week we waved goodbye to January, the month when it feels acceptable (in my book anyway) to hibernate indoors rather than face the wrath of the latest quirkily-named ‘weather event’, not to mention the discomfort of a tighter waistband on those sleek running bottoms which fitted perfectly before the festive chocolates were polished off! With the arrival of February, suddenly it feels there is no time to waste in working towards the running goals we set ourselves for 2016.

There will undoubtedly be a huge turnout from OAC at the Rollercoaster Races, due to take place on Saturday at Downpatrick Racecourse. Beginning at noon with a series of Junior races, including a 1.5k ‘Colts and Fillies Stakes’ race in which I understand the accomplished young OAC athlete, Rory Hall-Thompson, will compete for the last time as an U13, there will be plenty going on before the Senior event – the Rollercoaster Derby – gets underway at 2.15pm. The second race of this year’s club championship will give us all the chance to unleash our inner horse as we gallop along the 5k course (25 furlongs in horse racing parlance).

Earlier on Saturday, 700 runners descended on Antrim Castle grounds for the penultimate 10k in this season’s Born 2 Run “Run Forest Run” series. Built originally in 1613 by English settler Sir Hugh Clotworthy, and rebuilt in 1813 as a three storey Georgian-Gothic castellated mansion, Antrim Castle stood on the banks of the Sixmilewater River until it was destroyed by a fire that broke out during a grand ball on 28 October 1922. Although much of the evidence pointed to arson, the official verdict was inconclusive. The castle was finally demolished in the 1970s and now all that remains is a slightly raised grass platform, as well as a gatehouse and a freestanding Italianate tower which was built in 1887.

Described as being “a popular tourist attraction”, the Castle grounds certainly looked impressive in the photos used by Born 2 Run to promote the event. The following three OAC members travelled to Antrim to take part in what I understand was one of the fastest and flattest races of this winter’s Run Forest Run series:

Congratulations to MOD, Mairead and Shona on completing yet another race in the Run Forest Run series. You must all be well on your way to earning the Forest Finisher T-shirt by now! I understand that Michael’s time was a personal best over the 10k distance, but he is keeping quiet about it as his GPS watch recorded the course as being 0.1 mile short.

Up until the Antrim Castle 10k, the Run Forest Run series had been dominated by William McKee and Laura Graham (both of Mourne Runners), who had 100% records going into Saturday’s race. Whilst Laura maintained her unbroken record, finishing in an impressive 36:02, William narrowly missed out on first place to Mark McKinstry (North Belfast Harriers) who was first to cross the line in 31:46. 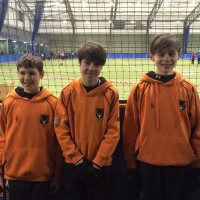 The Meadowbank Sports Arena in Magherafelt was the venue this weekend for the annual NI & Ulster Juvenile Indoor Track & Field Championships. Athletes from the U12 to U19 age groups competed on the indoor track, with events ranging from the 60 metres to 1500 metres.

OAC was represented in the 60m heats by the following Junior athletes:

Both Aaron and Matthew qualified for the 60m finals and recorded the following times:

All three boys normally run middle/longer distances so they are to be congratulated in representing the club so well in Magherafelt. Once again, the OAC Juniors and their coaches have given us all reason to believe that the future is orange!

With so many OAC athletes heading to Downpatrick for the Rollercoaster races, it was perhaps inevitable that things would be quiet on the parkrun front this weekend. At Victoria Park, the only OAC members who appeared in the results were Robin Montgomery (warming up for the Rollercoaster) and Verity Cornford. Over at Stormont, first to cross the line was Paul Woodman who must have been delighted with his time of 19:16 (a PB for that course). Also running at Stormont were Fintan Hurl, Melinda Wilkinson and Lisa Fleming.

In an effort to complete as many running events as possible in one day, Michael O’Donoghue warmed up for his Born 2 Run 10k at Antrim parkrun. Meanwhile, at the opposite end of the country, Rodney Corrigan was a first timer at Armagh parkrun. Finally, a bit closer to home, Darren Houston performed well at Comber parkrun, finishing in 4th place with a time of 21:33.

You will all be hugely relieved (but not as relieved as me!) that this report is almost at an end! But it would be remiss of me to finish without reminding you that Gerry Ward and the rest of the dedicated volunteers need help to keep the parkrun show on the road. I understand that it’s Gerry’s 83rd birthday this month – what better way to help him celebrate than to contact him at belfastvictoriahelpers@parkrun.com to offer your services as a volunteer?

We’re only talking about two or three times a year – you’ll still have plenty of opportunities to run. It’s hard to beat the feeling you get from knowing you are helping to keep the smiles on runners’ faces every Saturday morning!