We’d a fairly quiet week to bring in the Autumn as many of our athletes focus on Belfast & Edinburgh Half Marathon campaigns, both being held on 22nd September.

Nevertheless, OAC athletes took part in races in Switzerland, Newcastle Upon Tyne and Wiltshire, alongside some local events.

It is more an institution than a race as such; it is you against that frightful hill that stretches from Annsborough to the Castlewellan Market House. You tend to park the car in Castlewellan and then run downhill to the start. So, the warm-up is not a problem! At the start everything happens quickly. At the first break in the traffic the off is sounded and away you go. There is no perception of racing other people but there are plenty of them about. Most are used to hills being from the Newcastle, Mournes, Murlough and East Down clubs. Many of them are children and most of them can run very well indeed. This was my fourth consecutive Mill Hill Mile. In the last three years I managed 8.05, 8.07 and 8.09. This year I at least expected 8.11, maybe even quicker than last year’s 8.09. Unfortunately, it was a disappointing 8.21 despite the perception of running quite well. In fact, my watch said 8.17. So, where did all those extra seconds come from? Increasing age maybe. Roadworks on the hill didn’t help as they required an S manoeuvre which undoubtedly broke everybody’s pace and momentum. The hoards of children didn’t help either, many of them running about my pace. You had to be very careful not to trip over them or trip them up. They are so good they probably deserve their own race. Anyway, it was only a bit of fun. The rain stayed off and the post-race chips were very good indeed.

On Wednesday 4th September, Ali McConnell headed off with work colleagues to Wiltshire for a 10 mile championship race. Promises of a flat course and pbs were more than a little misleading. The race took place on the airfield at RAF Lyneham. It was 2 laps of 5 miles each. Between long inclines and strong winds on an exposed course, it made for a hard day at the office. Ali was happy with how she raced. She was 217th out of a field of 392 competitors, and was 32nd Female out of 120.

The after party in the Sergeants mess that evening more than made up for the false promises of a fast flat course.

To mark the end of Organ Donation week the 10KM na Ceathrún Gaeltachta 2019 took place on Sunday 8th September. Spearheaded by the Donte4Dáithí charity, set up for a young boy named Dáithí who was born with a very rare heart condition called Hypoplastic Left Heart Syndrome, and now requires a heart transplant to save his life.

Starting and finishing at the Cultúrlann McAdam Ó Fiaich on The Falls Road, the route took runners on a climb up The Glen Road, down into Andersonstown, back onto The Falls Road before a small loop of Falls Park then onto the finish.

Gillian Logan was the sole OAC athlete in attendance and finished in 46.24 for 5th female. The atmosphere and support along the route was fantastic as a sea of pink T-Shirts made their way around the course, definitely one for your race diary next year!

Billed as ‘The Most Famous Half Marathon in the World’, the iconic GNR took place on Sunday 8th September. Jean Stone was lucky to secure a place in the ballot for this years race, which takes participants on a 13.1 mile journey starting in Newcastle Upon Tyne city centre and finishing in the atmospheric South Shields. Runners are treated to a display by The Red Arrows while running along the famous Tyne Bridge – It really is a spine tingling event and a must do for any avid runner! Jean was coming back from injury and did really well to finish in just under 3 hours and even managed to complete Newcastle ParkRun on Saturday as a warmup! Well done Jean and we really hope you enjoyed your weekend on The Toon!

The Jungfrau Marathon is one of the best known mountain marathons in the world, in full view of the famous Eiger, Mönch, and Jungfrau mountains in the Bernese Oberland area of the Swiss Alps. Which in hindsight is a ridiculously difficult 1st marathon to choose. As always I learned a lot the hard way. I learned that I ate too much pasta for breakfast because all the other runners in my hotel were eating it. I also learned that as tough as cave hill was to climb in my training runs I might have underestimated running in the Alps.

The 42.195-kilometre (26.219 mi) course starts in the town of Interlaken and climbs 5,960 feet (1,823 m) in elevation to the finish at the Kleine Scheidegg. The race begins in central Interlaken and circles around the town centre before moving east to Bönigen, where runners briefly run along the shore of Lake Brienz. The race proceeds southwards to Wilderswil at the 10 km mark. From there the course heads upward through Zweilütschinen (at 15 km) to Lauterbrunnen (at 20 km).The first 13 miles climbs around 550m over asphalt, grass, gravel and trail. This was the supposedly ‘easy’ part of the race completed. The course loops south of the town before returning to Lauterbrunnen and then heading eastward up the alpside. It is at this point that the runners are greeted by ‘The Wall’. This is the steepest part of the race zigzagging up the hillside and climbing 450 m in the 5 km route to Wengen. In the information pack we were urged to respect the wall or we would pay the price later in the race. I was paying the price halfway up it with cramps in my feet and calves. If you eventually make it to Wengen the course heads southeast and relentlessly upward over the Wengernalp, turning east and then northeast beneath the Eiger toward the finish. It reaches its highest point of 7,234 feet (2,205 m) around the 40 km point, and then heads steeply downhill for the last kilometre to the finish at Kleine Scheidegg at an altitude of 2061 m. The views from Wengen to the finish were incredible, they helped put the smile back on my face after a grueling 18 miles. Thankfully at mile 18 I had digested all that pasta and i started to feel normal 😀 this meant I was was able to really enjoy the final part of the race. The last 8 miles is more of a hike or a scramble with as much running as you can squeeze in on the lesser inclines. At about mile 25 and 2300m elevation they have a bagpiper blowing the tunes, a sweeter sound I cannot describe! This meant i was about to be treated with a 1km downhill to the finish line. I manage to make it in a time of 6 hours and 20 mins, unimaginably difficult run for me but an incredible experience.

As ever, we’d a good representation of OAC club members at ParkRun events all over Northern Ireland and further afield!

Special mentions however go to:

Jean Stone – Warming up for the GNR at Newcastle!

Below is a consolidated report of all OAC athletes taking part in ParkRuns on 7th Sept: 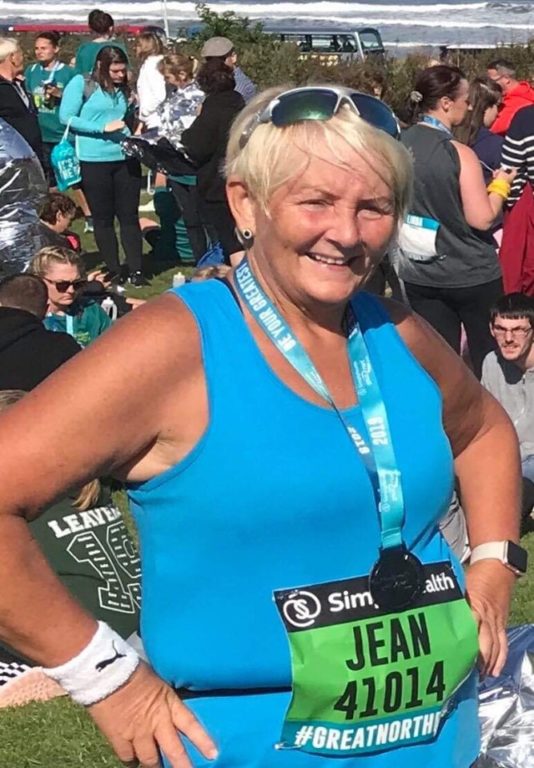 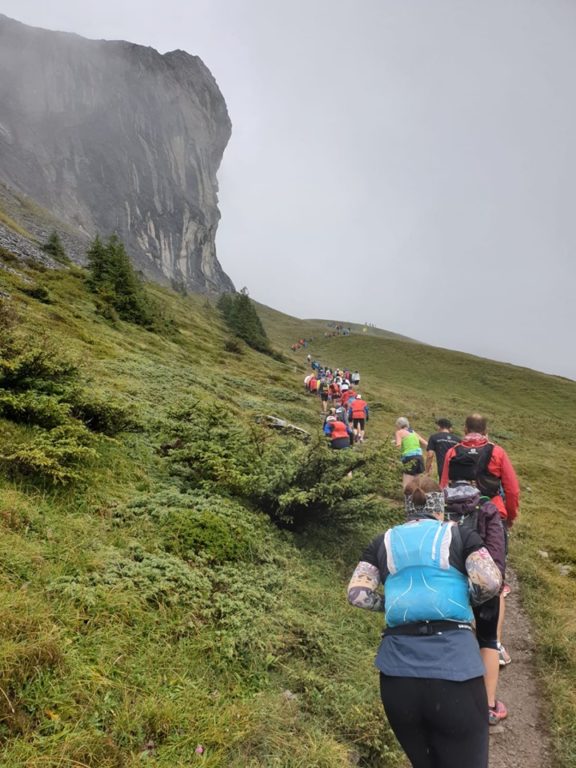 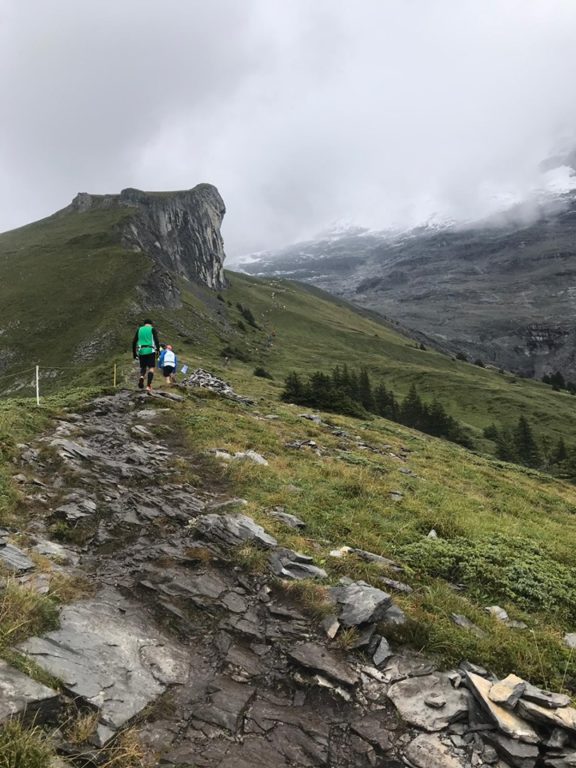 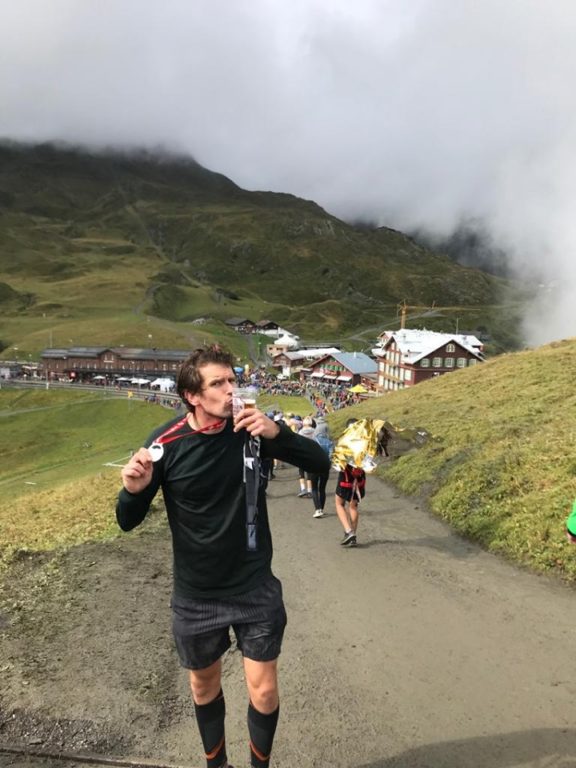 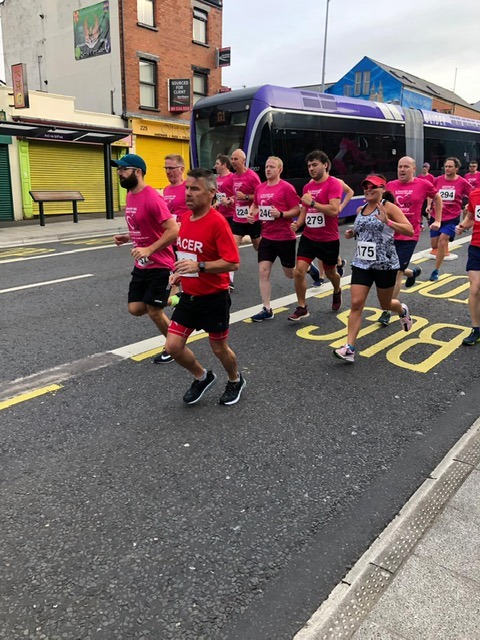 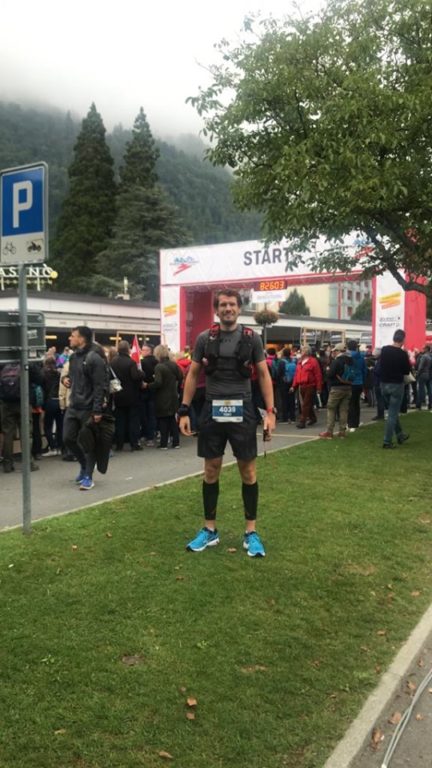