This time last year we were in the midst of what seemed like an endless summer with water bottles, sun cream and headgear being almost mandatory apparel for running! This summer has been more of a mixed bag with sometimes 3 seasons in the one day which is a bit of a reflection of the variety of distances and terrain covered by OAC athletes this week.

Once again the sun was shining and conditions were just about perfect for forest trail running. The organizers, County Antrim Harriers, have either been extremely lucky with the weather or it never rains up at Woodburn in the hills overlooking Carrickfergus! This final race was to be over five miles although most Garmins measured it as just shy of that. It was basically a reverse of Race 2 with one or two bits of lovely track and trail added in that we had not been on before. There was a general consensus from those who took part that this final race was the most enjoyable of the three, even if it did culminate with that awful three quarters of a mile hill from the middle reservoir back to the timing mats at Woodburn Presbyterian Church. However, most of us had learned the hard lesson from Race 1, which had the same finish, that you must leave something in the tank for the last bit…or suffer accordingly. There was quite a bit at stake on this final evening of the series with a number of Orangegrovers in line for age category prizes and at least one, Edwina Ternan, hoping to claim a place on the overall female rostrum. To be in with a chance you really had to compete in all three races, and most of us did. Well, how did it go?

The following times were recorded by Orangegrove members and accompanying friends for Race 3:

Race 3 was won by Jordan Heron (Larne AC) in 28.14 and Tracey Atkinson (Albertville Harriers) was first lady in 32.54.Following Race 3 there was a prize distribution for those who had completed all three races based on their accumulated times. The following members were awarded age category prizes:-

However, the greatest accolade of all must go to Edwina Ternan who ran superbly throughout the series, being third lady in two of the three races and finishing second lady overall in the very credible time of 85.56. Very well done Edwina!

Once again it was a pleasure to take part in such a fantastic well run race series and early indications are we will return next year!

Leaving a very wet Saturday in Belfast in their wake a merry band of 5 Orangegrove AC members made the trip to a surprisingly very sunny Phoenix Park in Dublin for the second race of the Irish Runner Series. The 5 mile course takes you through the beautiful surroundings of the 2nd largest public park in Europe. Starting with a relatively flat 2 miles the race finishes with an undulating 5k to the finish line. Alan Martin was 1st of the OAC athletes across the line in 42.09 getting ever stronger as he comes back from his injury. Ian Wilson crossed in 47.53, Beverly Martin posted a fantastic sub 50 in 49.03 and Mairead Napier a super 51.17 in her first run in the race series. Dawn Wilson as always provided the much appreciated support and photo duties.

Elaine Weston was our sole OAC participant in the Roscor races run at Shanes Castle by Atlas running. Due to the amount of recent downpours conditions weren’t ideal with some areas being particularly muddy and slippery under foot with several flooded areas to negotiate. Elaine still managed to cover the 10km distance in a respectable 56:23. 1st home in the 10km was Peter McGarry of Mallusk Harriers in 35:11 and 1st lady was Gemma McDonald of Ballycastle Runners in 40:55.

A while back EAMS introduced a 6 hour challenge to their events so they can cover every desirable distance ranging from 10k to the ultra runners who want to do longer than a marathon. On this occasion EAMS, because so many of their usual runners including the organisers themselves are doing the upcoming Energia 24 event, they decided to do an event based at night, to simulate the darkness that runners will face during 24 hours. Running long distance events in the dark wearing a headtorch is a different kind of experience if you’re used to running during the daytime and is worth preparing for.There was a reasonable attendance of 70 runners who turned out at the bandstand at Loughshore Park on the Shore Road in Jordanstown. The route involved running from there along the coast as far as Gideons Green and back, which is about 4 miles. Doing this 6 times plus a little extra would get you marathon distance.It started out well enough, but we were soon faced with a sudden heavy downpour that meant a number of people dropping out. In this event even 1 lap gets you a medal so the temptation was there.I decided to tough it out and go as far as marathon distance, though not for the full 6 hours, because its only a week to Energia after all, so I didn’t end up needing my headtorch. There were a number of committed Mallusk Harriers there who were preparing for either Energia 24 or their own event 24 parkruns in 24 hours, who did go the full 6 hours.Though there were people doing different distances the prizes only went to the winning 6 hour runners. These were Micky McAuley (Mallusk Harriers) 10 laps, and Jill McCann (Muck Hogs) 9 laps. I did the marathon in 4 hours 38 minutes which put me in 6th place for the distance.

Hill and Dales Race 9 The Meels

The 9th and penultimate race in the 2019 Hill and Dale series took place last Thursday evening in the beautiful surroundings of the Mourne Mountains. Maybe due to other commitments and possibly a lot post marathon fatigue the challenge of this exciting race series hasn’t had the same OAC following as of previous years, but our mountain specialist Andrew Tees and sometimes sidekick Chairman Montgomery have kept the OAC flag flying in the Mournes! This race was a relatively short sharp lung busting thigh screaming jaunt of around 5 Km in total but as the name of the race suggests there are 2 main climbs are over the peaks of Meelmore (704m) and Meelbeg (702m) to contend with before returning down the sheep tracks to the finish. The winner on the night was Newcastle AC’s Mark Stephens in 28:47. Winner of Ladies race was Esther Dickson Newry AC 34:21. Despite faceplanting into a bog on one of the descents the ever-improving Andrew Tees finished in 4th place with a time of 31:56. With Andrew now regularly featuring in the upper echelons of the leaderboard its only a matter of time before we see him taking home a podium place or 2! Robin Montgomery followed Andrew home in a time of 40:09.

Celebrating its 40th year in 2019, and organized by Armagh AC, the classic Flagstaff to Carlingford mountain race is a firm favourite amongst NIMRA runners. The point to point course offers varied and runnable terrain in beautiful surroundings above Carlingford Lough.

This is race where route choice and navigation make all the difference, as proven in 2018 when horrendous visibility left many competitors wandering in the mist on Slieve Foye looking for the summit. Luckily there were no such problems this year, as the recent poor weather abated briefly on Sunday to allow blue skies, and even some sunshine, to grace the hills.

The route of the race starts on the road near Flagstaff viewpoint and proceeds along the ridge of the Cooley Mountains, crossing the border 3 times whilst taking in the summits of Anglesey Hill, Clermont, Black Mountain, Carnavaddy and Slieve Foye, before finishing in the middle of Carlingford town. 11 miles in all, with 1000m of ascent.

Seamus Lynch of Newcastle AC was victorious once again, finishing in 1 hour and 40 minutes and Esther Dickson of Newry AC was first lady and 6th overall in 1:56.

Flying the flag as always for Orangegrove, our very own King of the Mountains Andrew Tees once again put in another strong performance finishing the course with a clean T-shirt and a superb time of 1:57:56 for a magnificent 7th place out of 65 runners. Very well done again Andrew.

As always there was there was the usual smattering of OAC members taking part in local Parkruns, but Parkrun of the week must go to Lisa Fleming who made the long trek to Strabane on the premise that someone important was visiting the Parkrun there. Alas the earlier than usual start and long journey turned out to more than worth it as Lisa got to run with long time hero and Queen of the track Dame Kelly Holmes! I hope you also invited her to VP Lisa! 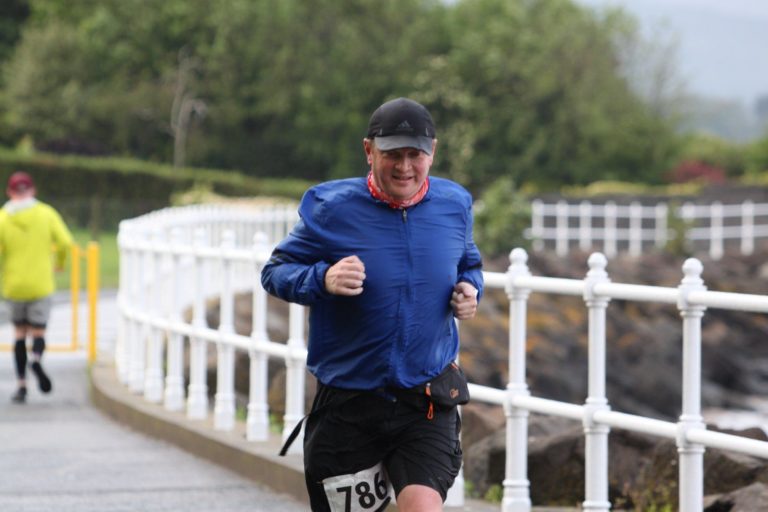 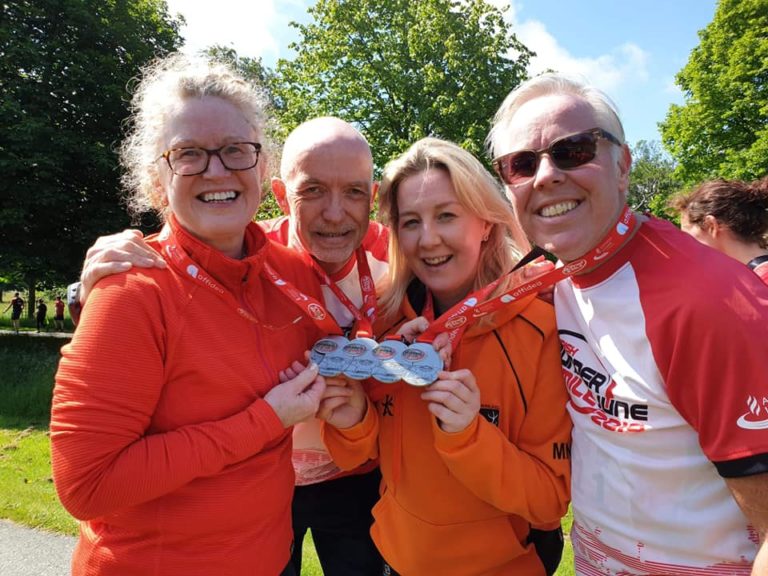 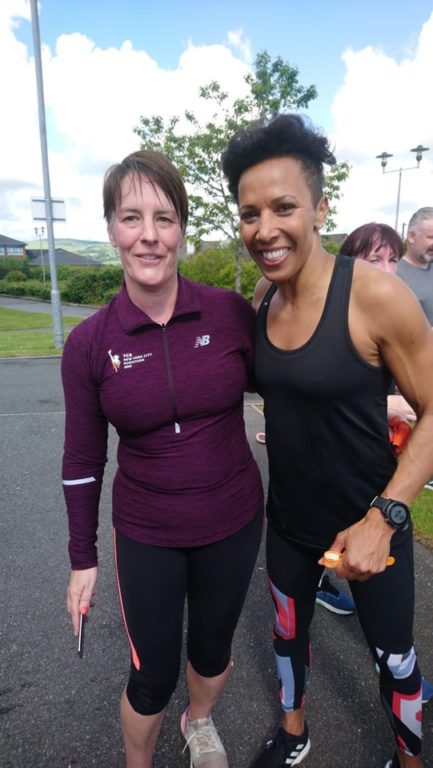 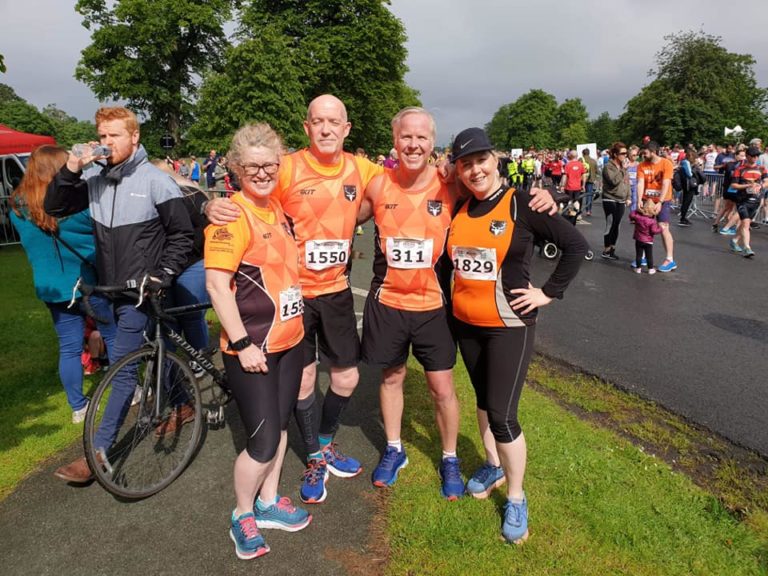 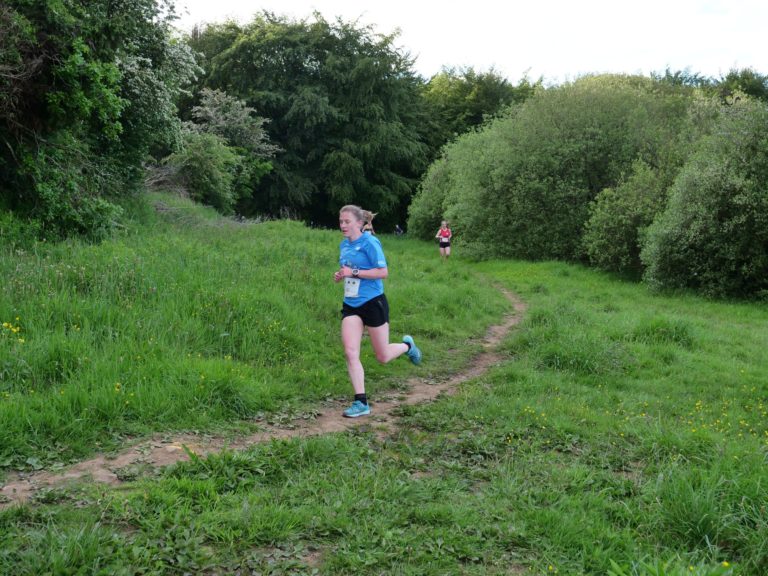 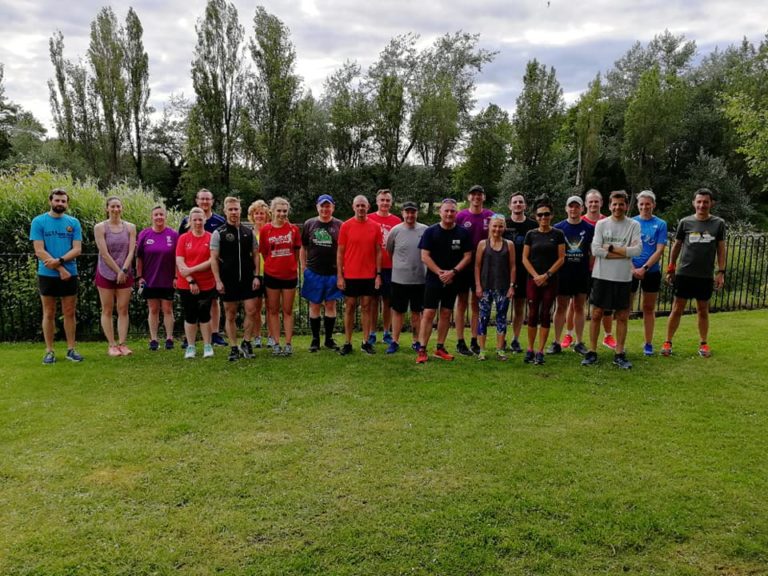 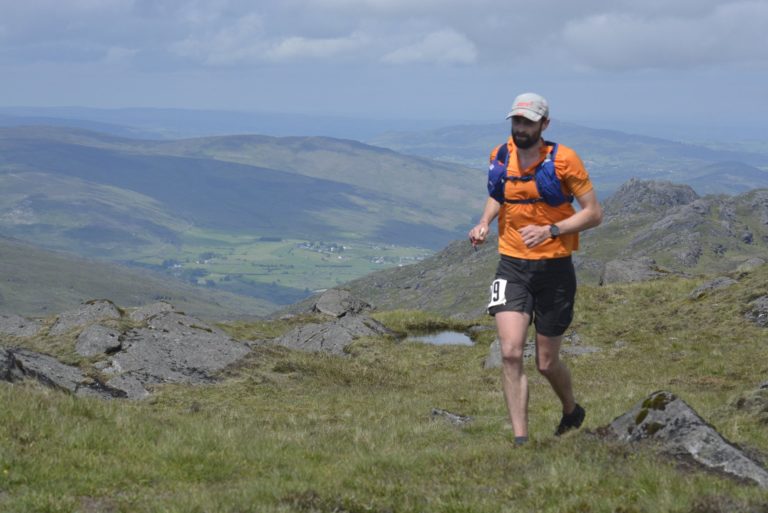 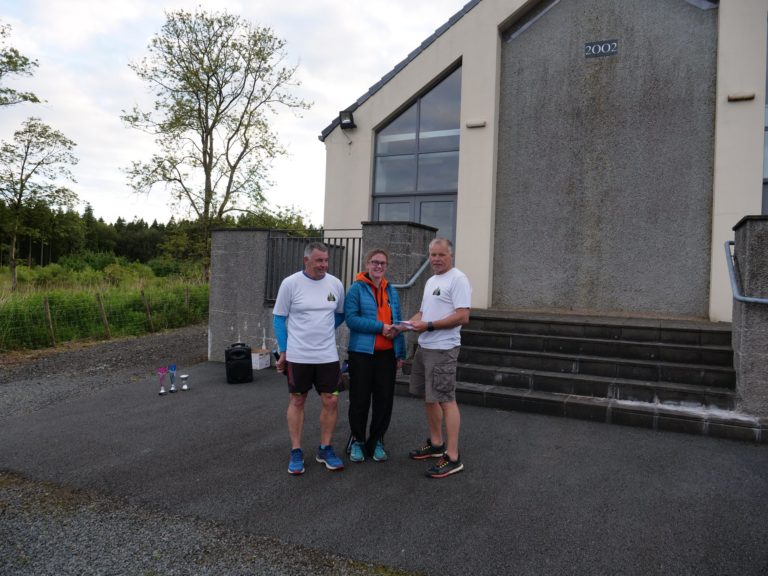 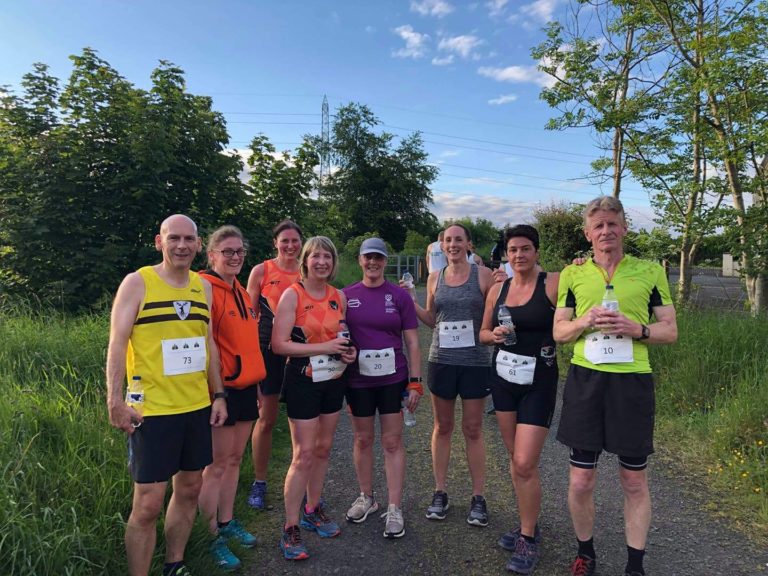 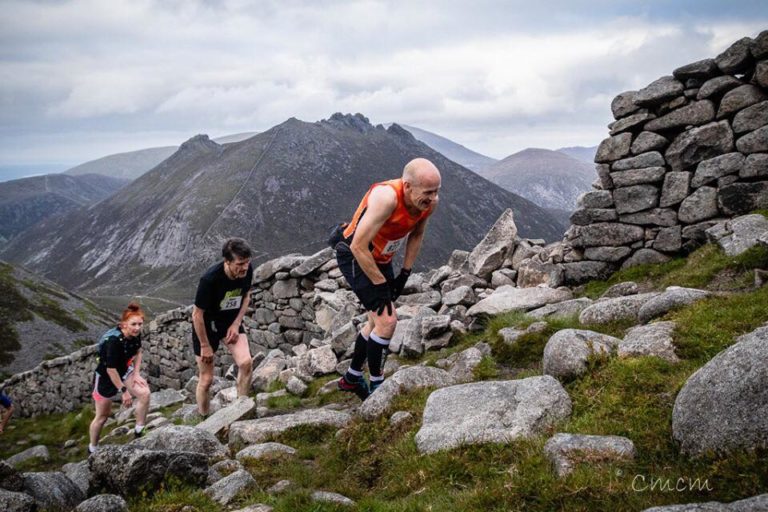 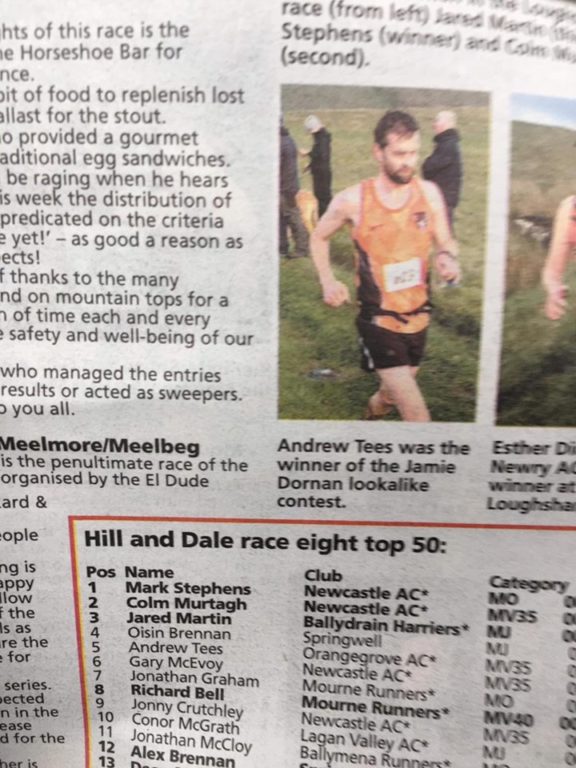