The first race in the three race Woodburn Forest Series took place on Tuesday evening in the hills above Carrickfergus. The sun was shining but, most importantly, the temperature was low enough to keep the midges at bay. This series has been off the calendar for a year or two but has now returned courtesy of Seapark AC. Competitors were asked to pay up front for all three races, each a fortnight apart. This, maybe, kept numbers a little lower than expected (about 60) as there were no entries taken on the night. This first race was exactly three miles long. The start was on the path adjacent to Woodburn Presbyterian Church. The initial half mile or so was comfortably downhill to the lower reservoir after which the reservoir was skirted before a long cruel climb back to the timing mats. This took a toll on most of us and conversations were muted until some considerable time had elapsed after the finish!
There was a good sprinkling of OAC members and friends on the start line at Woodburn and the following times were achieved:
Edwina Ternan…21.08
Brian Todd…21.16
Verity Cornford…24.03
Lisa Fleming…25.20
(Cathy Fraser)…25.27
(Emma McWilliams)…26.12
Jill Holland…26.23
Adrienne Savage…26.45
The first Woodburn Forest Series race was won by Jordan Heron (Larne AC) in 17.11 and first lady was Allyson O’Toole (East Coast AC) in 20.09.
The next race (4miles) is on Tuesday 28th May.
PS…I understand that registration has opened again for the final two races at a cost of £25.

Hill & Dale Race 5 – Rocky – Thursday 16th May
One of the more runnable Hill & Dales, making use of extensive trails in the open mountains, it attracts good numbers each year. In common with several of the races it alternates between clockwise and anti-clockwise to keep things fresh. This year it went clockwise taking in the summits of Rocky, Tornamrock, Tiernans Castle and Altataggart.
We had strong performances from our athletes at this one. Andrew Tees made 4th place (35.49) in a closely fought battle with Barry McConville (Newcastle AC), making use of the downhill path instead of open mountain, a strategic choice that paid off.
In addition, Jake Dalzell won the junior category with a time of 45.40.
Also present was Robin Montgomery (45.20)
The winners were Seamus Lynch (Newcastle AC) in 31.36 and Esther Dickson (Newry AC) 36.29.

Les Jones 10k 17th May
A relatively unassuming 10k, it has little hype attached to it, but has been going on for 28 years and is a great race. Organised by Athletics NI themselves, it travels up from Mary Peters Track, going down into Lagan Meadows onto the towpath, before heading back up a brutal climb (which I can never run up the whole way without stopping) through Barnett’s Demesne onto the finish back at the track. It was quite a warm evening, but pleasant enough in shade along the towpath.
There were a hardy quartet from OAC up for the challenge, most of which were new to the race, and their results were as follows:
Michael O’Donoghue 43:21
Verity Cornford 51:07
Catherine McIntyre 54:40
Elaine Weston 57:21
The winners were Stephen Wylie (VPCAC) 33.26 and Gemma McDonald (Ballycastle) 39.47.

Annalong Horseshoe – Saturday 18th May by Andrew Tees
The 2019 iteration of the Annalong Horseshoe race saw major changes as the organisers moved the start and finish area from Dunnywater in the Annalong Valley, where it had been for the last 37 years, to the adjacent Silent Valley. This alteration, along with an added checkpoint on the summit of Donard, meant that the total ascent increased massively, from 1300m to over 2000m, and the distance was increased from 13 miles to anything between 14 and 18 miles (depending on the route choices of the runner).
With a new route, the added height and distance, and thick cloud enveloping the summits, it was always going to be a tough day out. And so it proved. Back at race HQ, finishers could be seen sitting around in silence with a cup of tea and a thousand-yard stare. Thankfully BARF had laid on a great spread of buns and sandwiches to help ease the trauma and eventually there was much chat and craic had about route choices and navigation errors.
Newcastle’s Mark Stephens, formerly of Lagan Valley Orienteers, showed his navigation prowess to win the race by a country mile, in 2:38:39, 14 minutes ahead of second place. Ciara Largey of Omagh Harriers (also an orienteer) was first lady and 23rd overall in 3:49:32.
Andrew Tees was, perhaps unsurprisingly, the only Orangegrover on the start line, finishing in 3:16:14 for 9th/68.

Rosa Gillespie was competing in Long jump. Unfortunately on the day she wasn’t able to bring home a medal. But it’s a fantastic experience for her…and there a big things to come from this young athlete in the future. Well done Rosa.

Sean McLaughlin was also competing in Long jump after his medal success in the district qualifiers. After having a tough year of injuries this was not to be Sean’s day. But still a great experience for him. Well done Sean.

Anna McKinty showed great form in her Triple Jump…….and true to form she again brought home the Ulster Schools Championship Gold medal 🥇
This girl is just fantastic for her age …..and many thanks to Adam McMullan for coaching her to success yet again. Looking forward to seeing what she does in the all-Ireland finals.

Hakim Berrada who medalled in District Championships put in a gutsy performance in the Junior Boy’s 200m race. This race was seriously fast and unfortunately Hakim couldn’t bring home some bling. But as a new member of OAC’s sprint squad I know he’ll have more success next year.

Next up was Matthew Sykes….in the Junior boys category.
Matthew ran a massive PB in the 100m heat …surprising himself… and putting him in the top spot going into the final…..and he did not disappoint….! Blasting out of the blocks Matthew went from a 6th place finish last year to 2nd place silver medal 🥈 in a PB time of 11.71..!
Not content with 1 medal…..Matthew also brought home a bronze medal 🥉 by running a storming last leg in Grosvenors 4x100m relay team…just missing out on Silver..!
Fantastic performance from Matthew who for the first time has qualified for the all-Ireland finals in June.

The Intermediate Boys 200m title was hotly contested ….with 3 Orangegrove athletes making the final…! and gaining PB’s. A first for OAC..!
Adam Sykes, Nathan Stewart & Rory Carson.
All strong 200m runners….but on the day Adam found something extra (on his 5th race of the day) and just pipped the other 2 boys on the line to take the Championship Title in 22.88. Rory and Nathan took home silver and gold respectively.. in 23.18 & 23.24..! What a proud coach moment to see them all on the podium. Adams and Rory will be through to the All-Ireland finals in June.
It should be noted that Rory is only 4th year…so is a year young in this category..!

Intermediate Boys 100m.
Adam Sykes and Aaron McCord both easily qualified through their heats and stood on the start line for the final….rivals that day …yet the best of friends and club mates…! Always hard….but always nice to have a friendly face. There was just a 100th of a second in it….but Adam again brought home another championship gold title….in 11.18 and Aaron a superb bronze medal 🥉 in 11.42. Fantastic improvement for Aaron who didn’t even qualify last year for the Ulsters. 2 OAC boys on the podium …! 1st and 3rd (2 out of 3 ain’t bad…!) 😁

Minor Boys Relay
Noah, Patrick and Oliver….defending Ulster Schools Mini Relay Champions from last year easily qualified through their heats for the final. Unfortunately this year they couldn’t repeat last years success due to some much larger teams. This is a difficult age with boys going through growth spurts at different times……but I have no doubt these determined & tight knit boys will train hard and come back fighting next year. Well done boys on your 5th place finish…5th in Ulster is a great achievement 🌟.

Last race of our day was the Intermediate Boys 4x100m Relay. Adam Sykes, Nathan Stewart, Joseph McNaughten & Lewis Hamilton made up the Grosvenor team…….and Rory Carson was the final leg runner of the Sullivan team. All 5 boys qualified from the heats earlier in the day. Lewis and Joe were on their 2nd race of the day…Nathan and Rory on their 4th race of the day…and Adam on his 6th race of the day. Yip…I’m tired just typing that..!
Lewis (a demon on the starting bend) took them out in the lead…Nathan also made ground on the back straight….making sure his changeover to Joe was slick to take him round to Adam to run the finish straight. There was no way anyone was going to catch them….! Adam crossed the line in 44 seconds flat bringing home the teams championship title….and breaking the 21yr old Ulster Schools record. 🥇🥇🥇🥇🥇🥇🥇🥇🌟🌟🌟🌟🌟🌟🌟

Off to the Irish Champs they go now..!

Rory also battled well on the last leg of his Sullivan Upper team….securing 5th place..!!
The Grosvenor boys Adam, Joe, Lewis, Nathan & Matthew also helped their school with their medal haul…to win the overall Ulster Schools Boys title & Harald Layland Memorial Cup.
What a fabulous day for the OAC athletes and their Schools…..especially since they are bang in the middle of school exams and GCSE’s. Their dedication to their training over the last year has paid off.

Thank you to all the parents who came along to support.

Portadown Marathon – Sunday 19th May
It must be a daunting prospect for a running club to organise a new marathon, especially when it involves a 10k, a half marathon and junior races as well, but that’s what Kernan Running Club managed for the Portadown Running Festival.
Starting at the People’s Park in the centre, it went around the town before heading out towards the town of Gilford before heading back along the flat towpath that goes between Portadown and Newry. Being County Armagh, rolling hills can’t be avoided and there were a few on the way to Gilford. As it was 2 laps the total climb was over 700 feet. Not a particularly flat marathon, but manageable.
Particularly after the glitches surrounding the Belfast Marathon, it was striking how well organised the event was. The mile markers were precise to the point where my watch would beep like clockwork as I passed the markers on a route that wasn’t particularly straight, and there were plenty of marshal posts manned by scouts. The goodie bag was packed full of items I’d want and there was a big catering effort from the club at the end. Massages were also on offer.
64 runners did the marathon distance including me. My time was 4.07. The winner Michael McGrinder finished in a time of 2.56.46 and first lady was Natalie Bowbanks with a time of 3.32.26.
The event was also part of the Pure Running Half Marathon Series, and had a much bigger turnout of close to 250. Keith Weir made the journey down and finished in a time of 1.43.57.
Parkrun
Parkrun is a timed run and not a race, but we had solid results at Victoria for the girls. Edwina was first lady (20.06) Gemma Blake (20:35) 3rd Heather Flint (21:15) 4th. We were also out in numbers at Stormont, Queens, Orangefield and Ormeau. Results at
https://www.parkrun.com/results/consolidatedclub/…

Thanks to Keith McClure, Charles Beaumont, Bob Given and Newcastle AC for the photos. 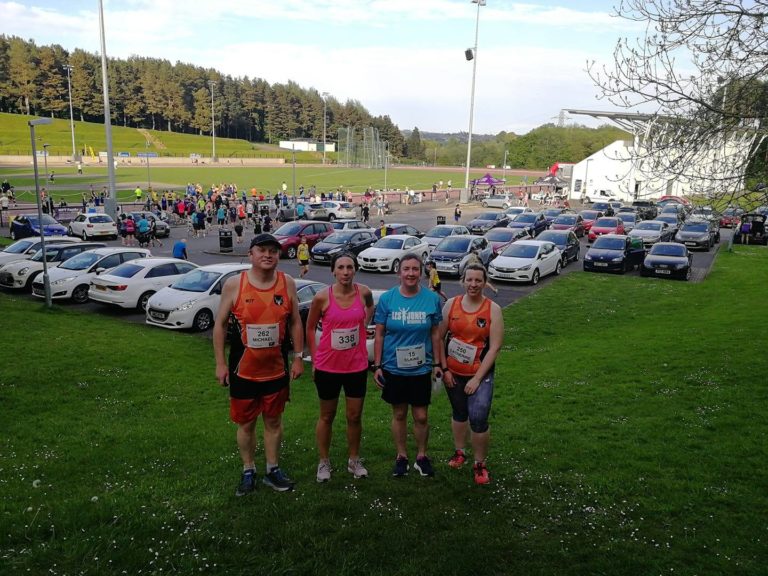 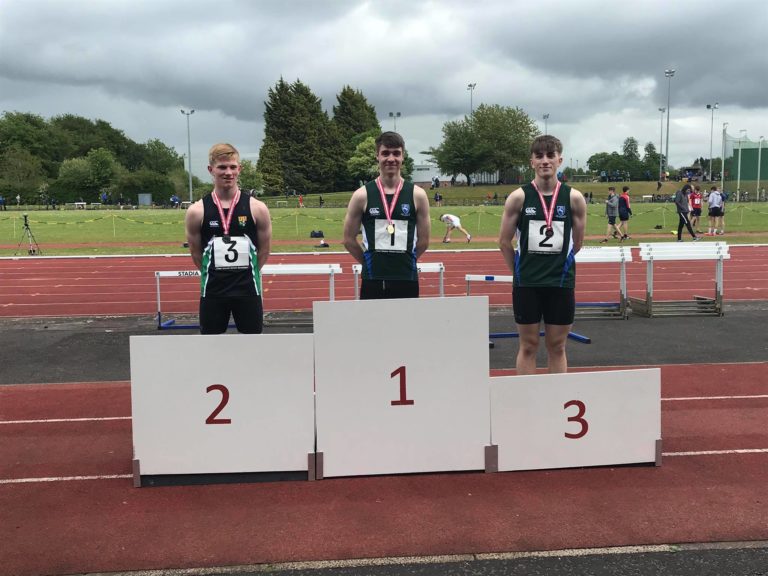 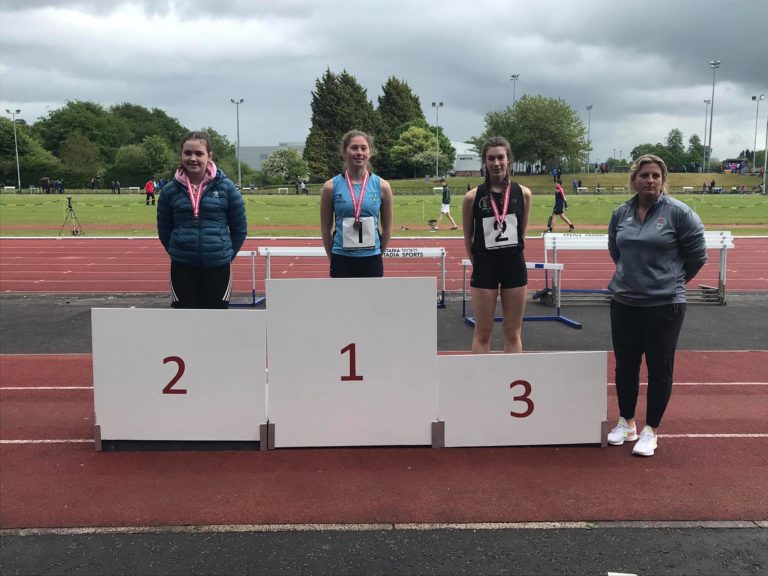 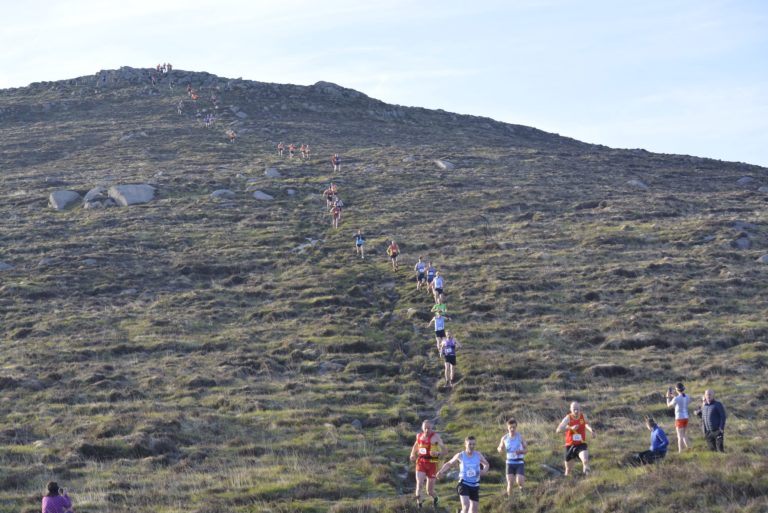 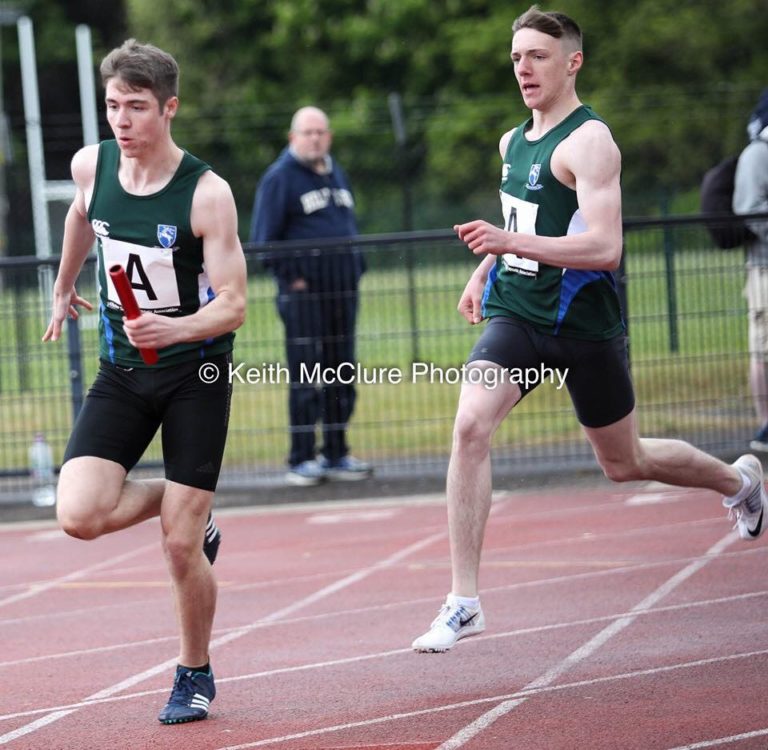 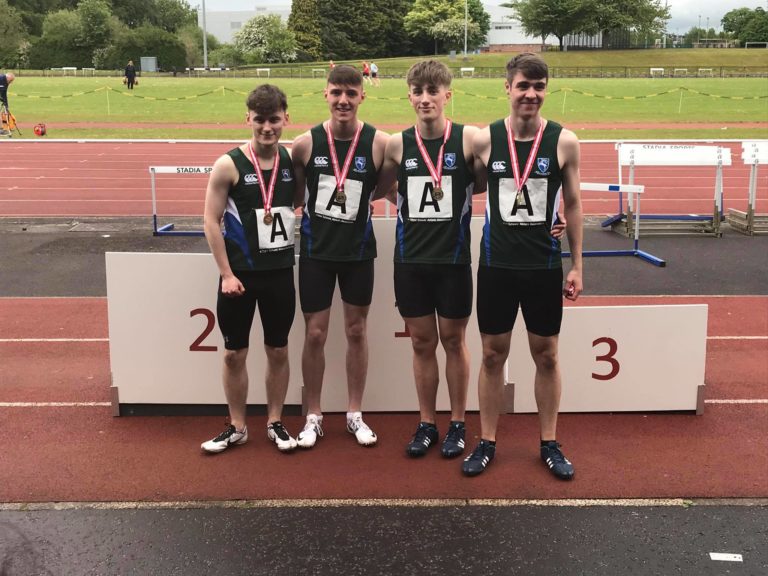 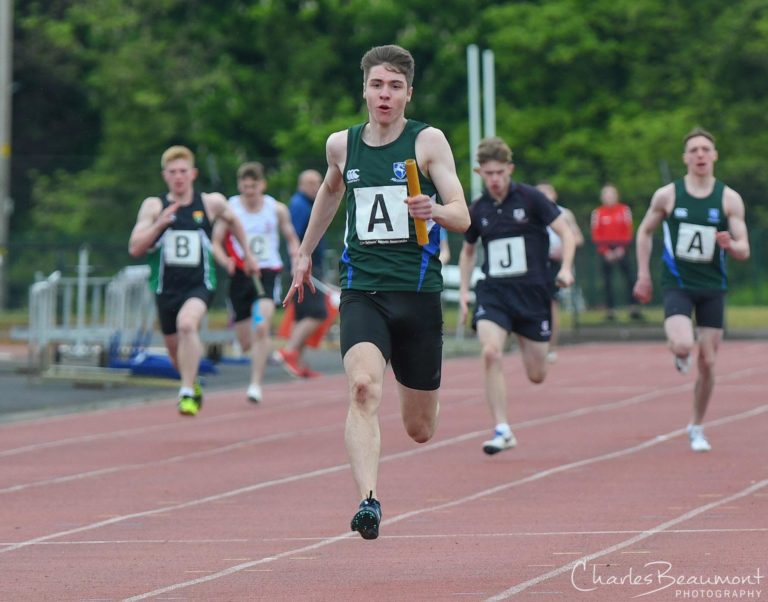 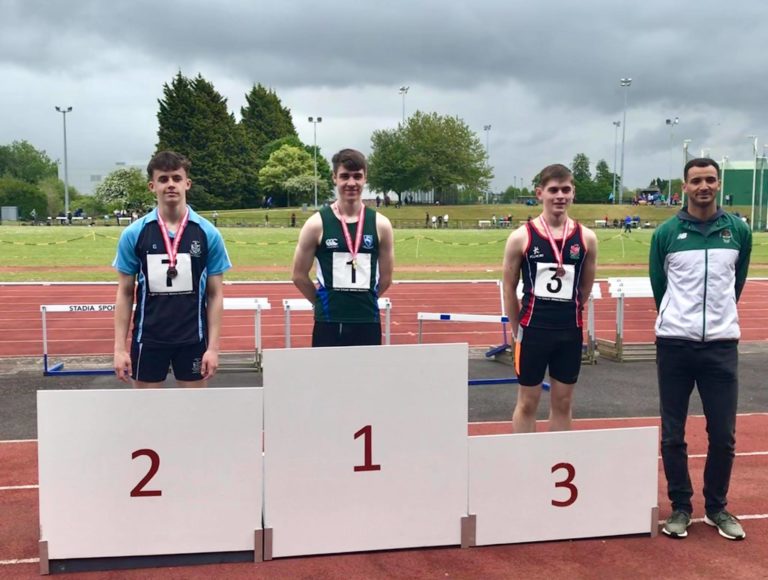 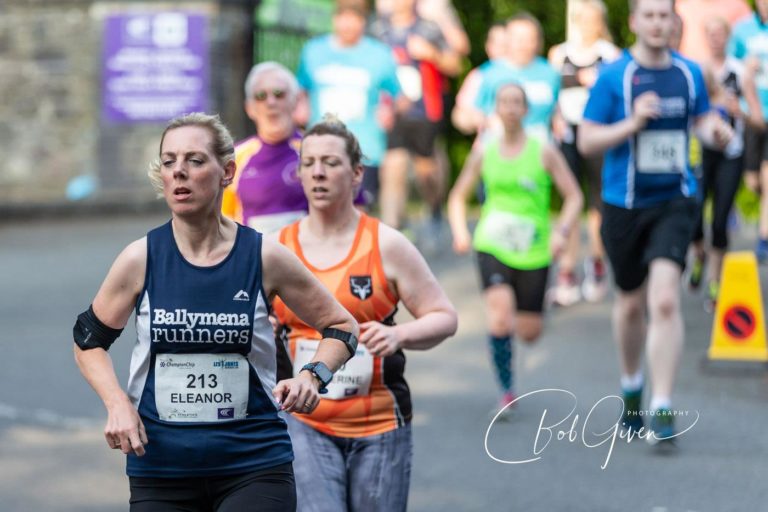 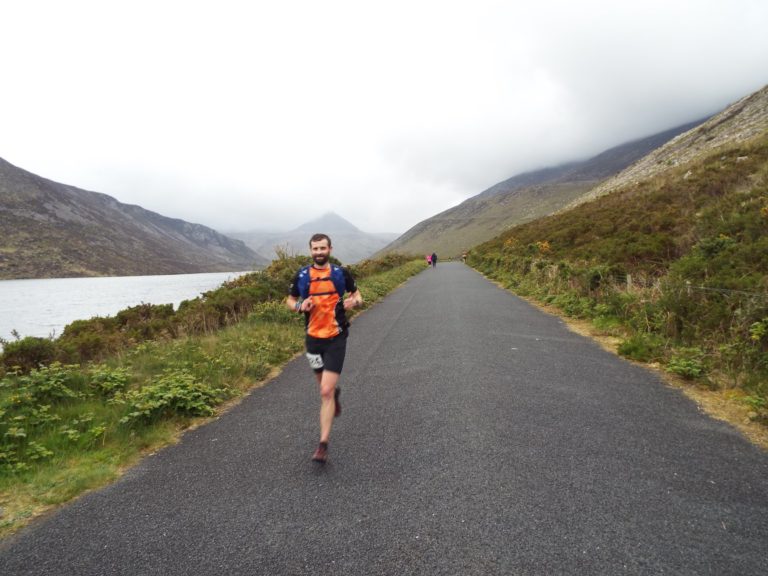 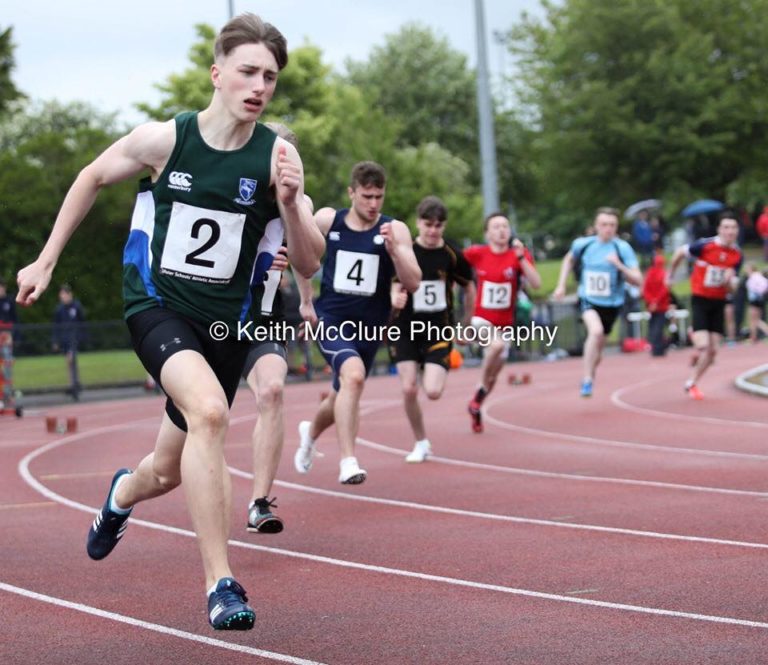 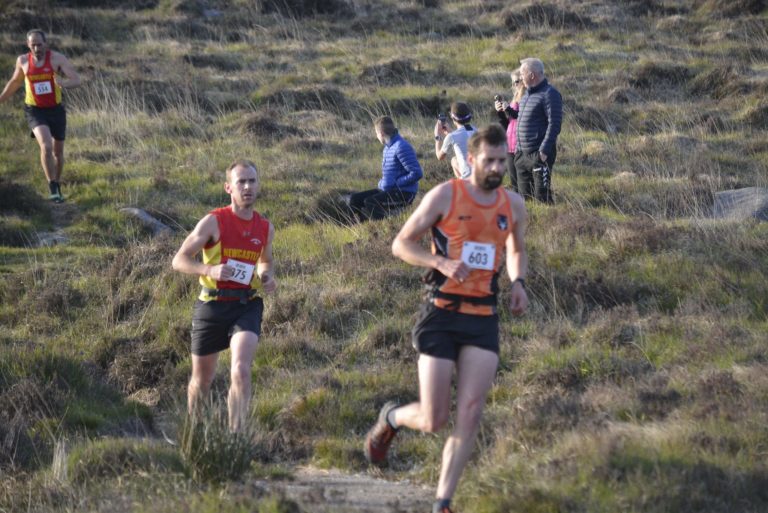 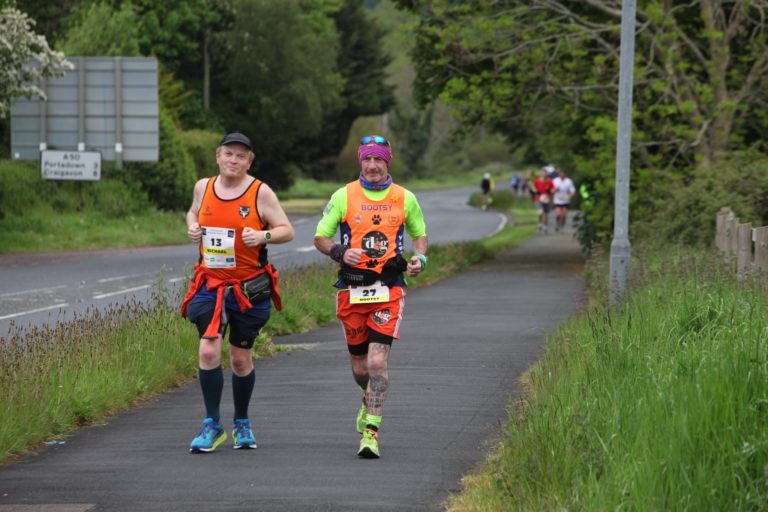