From a best kept village to trails and multi terrain; from 2x2s to 7x7s and; from 5k to 8,700ft of elevation…this was another colourful, eventful and varied week for Orangegrove with members partaking in no less than 9 races.

One of our runners of the year, Lyndsey Tyro, performed excellently again in Channel 4’s Village of the year with 1 of 2 2nd place finishes this week and, this regularly-voted best-kept village also boasts The Thatch Inn, one of Prince Charles’ favourite Pubs, beautiful blooming flowers and a blooming great 10k race!

We had no OG takers of the 5k race but the 10k race had 268 finishers and looked to be impressively organised. Mark McKinstry of North Belfast Harriers and Cathy McCourt won the 10k race in 34:11 and 40:09, respectively. Lyndsey Tyro finished with a silver medal in 2nd place and Paul Tyro finished in an excellent 10th place overall.

We had a bigger club turnout for this interesting trail race in which the trail stands for ‘glory trail’ as the OG glory trail continued with Age Category wins for Carolyn Beattie and Reg Sanlon – a very well done to both of you!

Also impressive was the winning time of 17:23 by James Graham and Kristi Foster of East Down AC was the 1st lady home in 20:31. Our nimble and nifty nine out of 211 finishers were:

CARLINGFORD 5K
We had 3 successful entries out of 531 for the Carlingford 5k or, Michael Fearon and Kevin Marron 5KM Road Race, which is situated in County Louth and a quite picturesque part of the world, especially with its sunny backdrop that evening. It started on the seafront and finished just inside the town area and was performed in a basically out and back fashion with the focus being on the race rather than the nearby Cooley mountains.

Well done to Harriett, Andrew and David who finished well up the numerical field in a competitive race won by Craig McMeechan of North Down AC and Una Britton of Kilcoole AC in scorching times of 15:13 and 16:53, respectively.

I am in no Quarry 5k quandary to say that our sole Rep Steven Gilliland did not have to dig himself out of a huge pit but instead shook his OG derriere in this quarrierre (old French for quarry) and raced really well in this Quarry 5k whilst also acting as the quarry (noun for ‘a person that is chased or sought’).

Yes, he lined up with 79 other athletes for the second running of the Quarry 5k race in Carnlough but on the first running of a different course. Glenlough Running Club, organised it so that the contingent started and finished in the heart of the village. Although there were some tough aspects to this course, hopefully the beautiful scenery along the coastline eased matters somewhat. The race was won by Kent Swann of North Belfast Harriers and Janice Plumb of Larne AC in 17:52 and 22:56, respectively.

Also on this fervent Friday Gillian Logan travelled to Cookstown (I hope Gillian receives land miles as well as air miles) for the annual Stanley Reid Memorial 5 mile Classic, hosted by Sperrin Harriers. It is dedicated to the memory of Stanley Reid, a fine runner in his own right who organised the first 5 mile classic in 2002. He was also instrumental in the formation of Cookstown Harriers, later to become Sperrin Harriers.

Their chosen charity this year was INSPIRE mental health, wellbeing and recovery , a local charity committed to ensuring that people affected by depression in the Mid Ulster area have access to high quality support services.

The course starts and finishes within the grounds of Loughry Campus, and covers the scenic country roads around Cookstown. It is an undulating but fast route, suitable for runners of all abilities, and also ideal for those with ambitions of a quick time. Quick times were produced by the winners Eoin Hughes of Acorns AC and Aisling Murray of Carmen Runners in 26:55 and 33:30, respectively. Gillian was OG’s sole Rep and performed well in this testing distance out of a field of 317.

The event, hosted by Belfast Association of Rock-Climbers and Fell-Runners (BARF), was the ninth race of the ongoing Northern Ireland Mountain Running Association (NIMRA) Championship and it covered a gruelling 19 miles with 8,700ft of ascent.
The annual Seven Sevens race was run in a clockwise direction this year, taking in the seven highest summits in the Mournes in the following order: Donard – Commedagh – Lamagan – Binnian – Meelbeg – Meelmore and Bearnagh. As in any fell race, runners are free to choose their own route, as long as the requisite summits and checkpoints are visited along the way. However, even the best route planning can’t make the race any shorter than 19 miles.

It was a perfect day to be in the hills, calm weather and good visibility meant that the views were spectacular and navigation would be simple. All the runners had to worry about were the 3000ish metres of climbing that they’d have to get through en route to the finish. Having only managed minimal training since the Energia 24hr, I was unsure if if be able to manage such a long race. But I set out at a conservative pace and was able to last, just. Though the 5 miles from the final summit to the finish line were very tough. I really enjoyed the run and was pleased to finish in a time of 5hrs 25mins.

The race was won by David Hicks of Newcastle AC in a ridiculously fast time of 4:09. Martje Hell of North Belfast was the first lady home in 5:09.

Hats off to Andrew for his lofty feat. I’ve seen the 12 Apostles in Melbourne but not the Seven Sisters in Queensland; I’ve seen Seven Brides for Seven Brothers in Belfast; heard of the Seven Seas; won some money on the Lucky Sevens (gaining me entry into the Seven Deadly Sins) but… I can’t imagine I’ll ever conquer the Seven Sevens!

MOUNT STEWART HALF MARATHON AND 10K

Scrabo Striders’ next race in their Run series was Run the Trails, Mount Stewart Half Marathon and 10K which was set in the beautiful surroundings of Mount Stewart just outside Newtownards on the shores of Strangford Lough. Spaces were limited and we had four club members racing between the 2 distances.

The setting is undeniable but was it any good? Sarah Wilson described as such: “Brilliant event. Loved everything about it: amazing scenery, challenging route, superb medal and first class hospitality! Scrabo Striders did themselves proud.”…so, I think it was a success and so were our fabulous four.

The Half Marathon was won by Louise Smith of North Belfast Harriers and Rodney Agnew of Ballymena Runners AC in 1:29:07 and 1:29:08, respectively. A tight finish out of 173! Michael was competitive as always in every distance and finished 35th.

Sarah finished in a creditable 73rd position and Anne and Stephen, who must now have tried a vast range of course types, weren’t hanging about and admiring the views too much either:
Sarah Wilson 56:19
Anne Devlin 1:12:58
Stephen Craig 1:13:06

You can view how our club members performed and where in the following link:
http://www.parkrun.com/results/consolidatedclub/…

However, some notable mentions are:

Lyndsey Tyro – the 1st person to run all 27 Parkruns in Northern Ireland!
Chris Downey – an ex-member but loyal friend, some of the club celebrated Chris’ 40th birthday with him at Bangor Parkrun.

Orangefield Parkrun – a lot of our club took part in Orangefield’s 1st ever Parkrun. We wish them well.

Don’t forget to volunteer. Email Gerry at belfastvictoriahelpers@parkrun.com to find out what you can do to help out.

In it’s 3rd year, and gaining popularity, this race started at GymCo Cityside (Yorkgate) with two water & cheer stations along the way at The Rock Bar and The Wolfe & Whistle and runners finished at the entrance of Malone College (Finaghy Rd North) where there was plenty of refreshments.

The Gymco Cityside Feile 10K Road Race was won by John Black (North Belfast Harriers) and Sinead Sweeney (QUB AC) in 32:50 and 37:17 in a race full of 385 runners but more importantly, this was Lyndsey Tyro’s 2nd 2nd place finish in a week. Super running Lyndsey…you must have some medal cabinet!

To top off this week’s exploits and to continue in the medal theme, Andy McIntyre achieved a bronze medal at this prestigious event, held at Meadowbank Sports Arena.

Gold was secured by Scott Rankin (Foyle Valley AC) and Marina Murphy (Derry Track Club) in 31:42 and 39:33 but on Sunday at the NI & Ulster 10,000m Championship the flying Andy McIntyre broke the 10k Orangegrove Club Track Record by over 8 seconds – setting a new record of 36.20.77 – congratulations Andy!

Thanks to club members for photographs and to Richard Corbett Photo Studio, Brian Quinn Photography and Michelle Corey Photography. 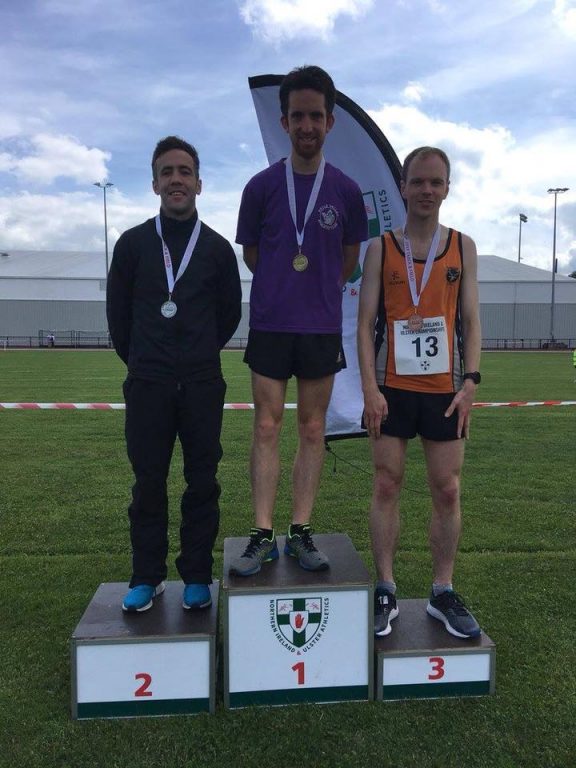 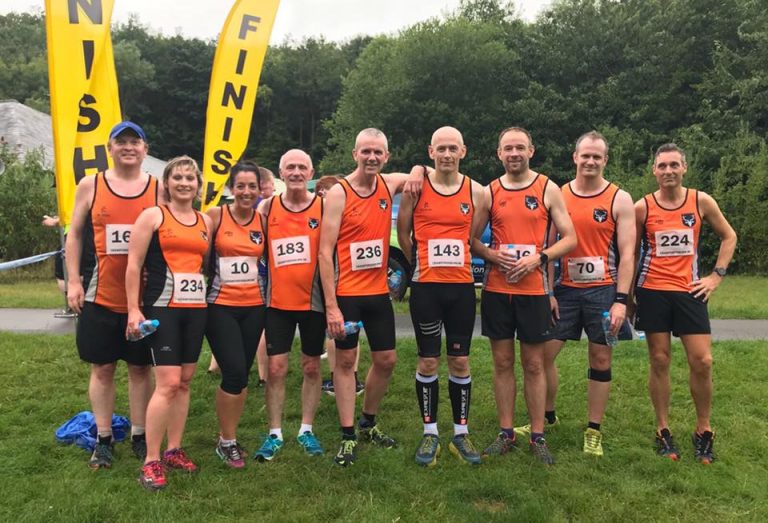 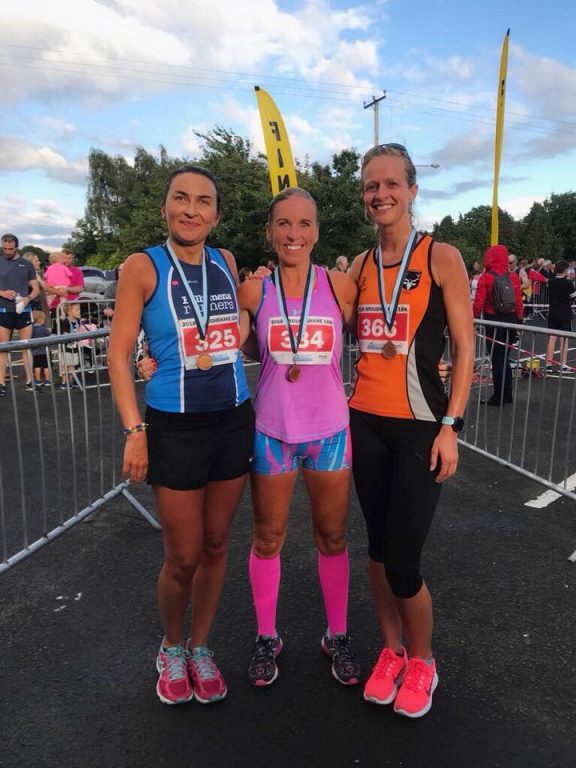