Considered by some a period for taking time off from exercise to relax, for us it has always been a busy time for running. As usual the xmas period was action packed with bonus parkruns and several xmas themed events which club members enthusiastically participated in and in some cases were involved in the organisation of the events as well.

This event occurs on xmas day and has been running for 36 years. It is conducted at 130 venues across Ireland. In Belfast this year the event was conducted at Cherryvale Playing Fields and consisted of 1 small lap and 1 large lap around the fields. Club member Des Fahy has been involved in the organisation of the event for a number of years and this year they raised a bumper amount of cash for the charity, which conducts programmes in the developing world.

The starting time was flexible so I made my way down after the xmas parkrun. As it was entirely on grass and the weather was pretty bad it very much resembled a cross country event except in road shoes. Spikes for next year!

Now in its 32nd year, The Greencastle 5 Mile Road Race continues to go from strength to strength. It attracted over 1000 participants and as ever, attracted some of the provinces best athletes.

Set on the edge of the Sperrin Mountains it is a rollercoaster of a race with plenty of ups and downs, cramming in nearly 500 feet of climbing in its short 5 mile distance including a now famous fairly tough hill at mile 4 that sometimes features on the race tshirt.

In previous years we’ve had snow and driving rain but conditions were fairly good if on the cold side.

4 athletes from the club made the journey down to work off the xmas turkey and the results were as follows.

Brian Todd won his age category and got a lovely trophy for his effort.

The winner was event regular Paul Pollock (whose figure adorned the tshirt this year) with a time of 24:31 and first lady was Emma Mitchell (QUB) 28:28.

Another Christmas event that has had expanded numbers in recent years, this year the start was moved to Tollymore Forest.

7.4 miles 470 metres of climbing including climbs up to Bearnagh and Meelmore before descending to the Happy Valley. Because of the change in start location the route was nearly 2 miles longer.

There were 77 athletes participating, including 2 of our very own mountain goats, Sharon Dickenson and Eoghan Rainey who judging by their times ran together.

At the front of the field Seamus Lynch (Newcastle AC) was first finisher with a time of 55:03 and first lady was Bethany Haugh (Mourne Runners) 1:11:23.

Club member Jim harris has been involved with the Boxing Day run at the sports facility on the Circular Road for a number of years. It’s more of a fun run than anything with 2 loops totalling 5 miles.

A dozen or so from the club made it down for the occasion. It wasn’t a timed event.

The event organisation Northern Velocity for the last couple of years have a series consisting of 7 trail events on the North Coast.

Muff Glen Forest Trail Run near Eglinton was a challenging 4.2 mile route taking in 2 laps of the glen in question.

The race was practically on Andrew Tees Tees doorstep over xmas so it made a perfect sense to participate in a type of race that would be his speciality.

The race turned out to be dominated by nearby large club Springwell. Luke Dunsmore won first place with a time of 23:44, 6 seconds ahead of teammate Ciaran Ferris. First lady was Ciara Toner (Springwell) with a time of 27.52.

Andrew Tees was an impressive 5th with a time of 26:22 just behind well-known mountain runner Allan Bogle.

Ever a popular event for the club, in part due to the opportunity to get kitted out in fancy dress for which there are prizes, this year had a bus load of club members making the trip down.

It was the 34th year of running for the event and a record 1300 runners participated. Along with the requirement to run in pairs, another unusual aspect of this race is that the course is different each year. Sometimes there are minor changes, but this year much of the course was completely different to other years in recent memory. This meant there were large stretches in the earlier parts of the course of mucky fields, made even more mucky by a recent snowfall. In addition the course was slightly longer than in previous years, being 9 miles instead of 8.5. It was also a bit hillier, totalling around 1400 feet of climbing.

Club results were as follows:

Jacqui and Reg won their age category in the mixed team prize. In addition Darren Marshall and Sharon Dickenson won a prize for the grinch themed fancy dress outfits.

These are considered the flagship events of EAMS. For many it is a Back to Back event with the first situated along the coast from Carrick to Loughshore and the NYE event taking place in Greenisland

It was the 4 year anniversary of the start of the East Antrim Marathon Series. It was originally inspired by a similar organisation called the East of Ireland Marathon Series near Dublin. The main objective was to help participants reach the goal of joining the 100 marathon club, which up until that point would have taken a long time to do and involve a lot of foreign travel. Pete Montgomery from East Antrim decided to start his own organisation mirroring this in part to reach his own goal of 100 marathons. On New Years Eve he managed to do this and will soon adorn the coveted 100 Marathon Club Ireland vest.

At the other end of the marathon count scale it was Eric Fairfields first marathon. As usual for the time of year there were rough weather conditions, but Eric did superbly on his marathon debut finishing in 4th place with a time of 3:12:18.

Originally doing just marathons, EAMS has branched out into doing 10k’s and half marathons as well. To round off her month of running every day Gillian Logan decided to go out with a bang and enter one of the half marathons.

Consisting of 2 laps of Greenisland in quite windy conditions Gillian finished with a time 1:57:33. First finisher was Judith Worthington with a time of 1:38:56.

Michael O’Donoghue decided to round off his year of racking up the marathon count and finished with a time of 4:40:03.

There were numerous xmas day parkruns available including Stormont, Waterworks and Wallace of which there was club member participation. There was a big turnout at Stormont in particular. A report can be found at 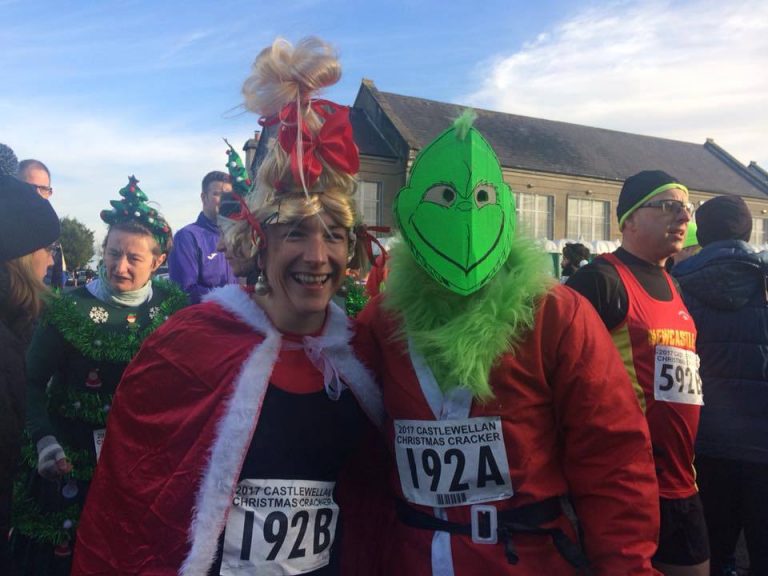 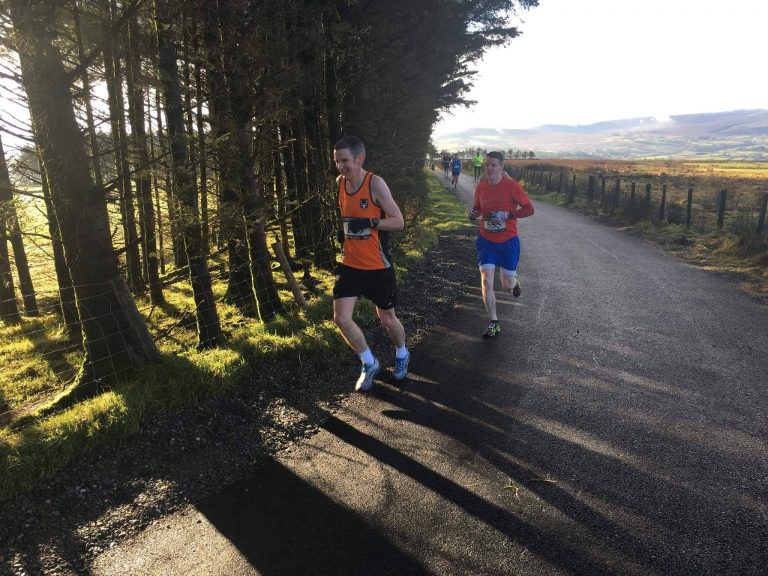 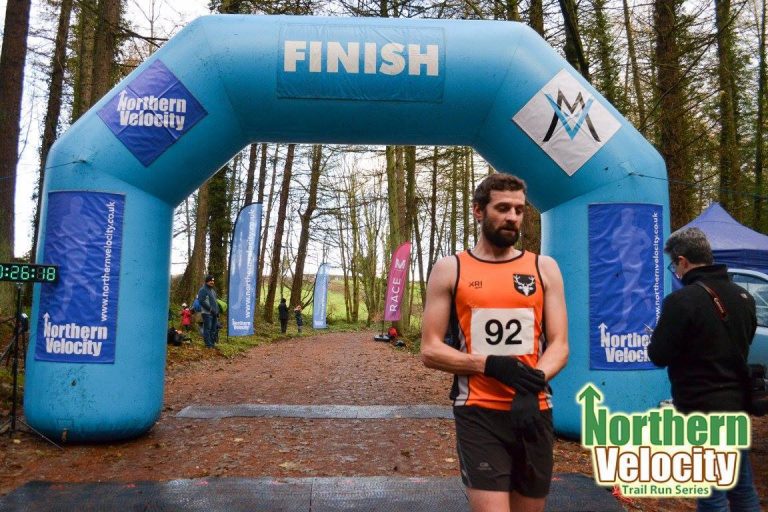 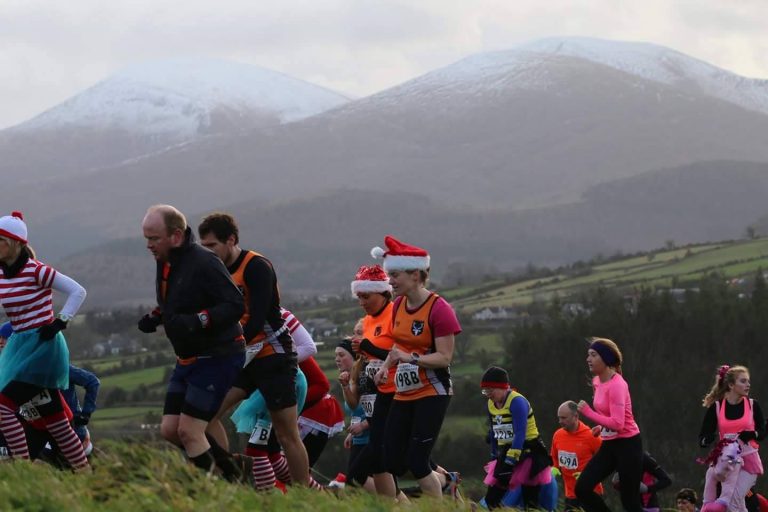