Roses are red, violets are blue, Nothing I love better, than a good running shoe.

Yes, Sunday is Valentine’s Day and various Orangegrovers have been spreading the love throughout the week in various locations and races such as: 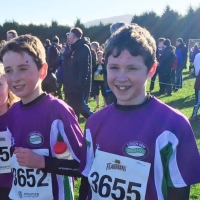 During the week Olivia, Christian Chandler and Matthew Sykes performed admirably in the NI Schools Final in which there were 23 schools taking part and during which Niamh McGarry from St Malachy’s Coleraine won in 5:43 and Oisin Colhoun from St Pat’s L/Derry won in 5:05.

This contest must have been frenetic, competitive and popular as there were 186 girls and 212 boys racing respectively in very quick times.

Ian Reid fell in love with Victoria…Park…on Saturday after he broke the 30 min barrier & achieved a PB of 29:53, well done Ian.

A welcome return to fitness looks on the cards for Mark Williamson and Michael O’Donoghue managed to squeeze in another Parkrun on the day of another race.

There were a few broken hearts at this course with presumable problems with timing but Aaron McCord and Adam and Matthew Sykes were loving it when they realised they finished joint first with 59:59!

Poppy McGonigle ran a very fine 24:23 and Brian Todd didn’t finish on his tod on 26:03 as Kirsty Buchanan finished just ahead with 26:02. It was not Paul Buchanan making Kirsty’s heart race this Valentine’s Day but rather the Ormeau PB.

Continuing the Valentine’s theme its nice to see the recently married Paul & Lyndsey Tyro both achieve 1sts in Age Cats with 20:22 and 22:19 respectively and Lyndsey with a Bangor PB.

They say ‘there’s no love lost on the hill’ when it comes to NI politics but Andrew Allen (22:24), Lisa Rodham (24:05) and Kerris Hamilton (25:50) contradicted this with a Stormont PB each. Melinda Wilkinson and Darren Houston also braved the cauld start to the morn. 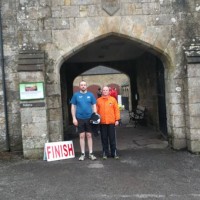 The final race in the Winter league series (in which MO’D may have completed all) is the 10 miler at Parkanour, which, is located close to Castlecaulfield, 4 miles from Dungannon. This new 10 mile course is a trial replacement for the Lough Fea 10 mile course and comprises of three laps of the trail around the forest (as opposed to four laps of Lough Fea) taking you past the stately Parkanaur House and its gardens and along the Torrent River.

Parkanaur House is a Class A listed large Tudor Revival style house and a two-storey building, constructed in the 1840s from block rubble. It has a terraced front with octagonal pinnacles and gables at each projection of the façade, a big bay window and an upper oriel and incorporates an earlier two storey building as an east wing. At the rear is a coach house and free-standing office block.

Land previously owned by the O’Donnelly family was granted by James I to Sir Toby Caulfield in the early 17th century and remained in the possession of the family until sold to Ynyr Burges in 1771. His descendants built a two-storey cottage on the estate which they called Edenfield. In the 1820s John Henry Burges moved in and enlarged the cottage, and his son John Ynyr Burges commissioned architect Thomas Duff to design a new mansion, which was built between 1839 and 1854, which he renamed Parkanaur.

The house remained in the Burges family until they moved to England in 1955. It was then bought by American millionaire Thomas Doran who had emigrated from Castlecaulfield as a teenager. He made the property available to his friend Rev Gerry Eakins to develop a new centre for the education of young adults with disabilities. The house reopened in 1960 as ‘The Thomas Doran Training Centre’, (Parkanaur College) and much of the house continues today in this role. The grounds were opened to the public as Parkanaur Forest Park in 1983. They contain a rare herd of white fallow deer.

Re our runners…Paul Gruhn and Michael O’Donoghue travelled for this race but there was a rumour circulating that Michael was trying to match his recent feat of 3 races in 1 day by hiring a helicopter to make the Parkrun, Parkanaur and O’Cahan’s Trail at Roe Valley….I wouldn’t put it past him!

At this hour, the results aren’t available but I am reliably informed that Michael achieved an approximate 74:48 time but Paul unfortunately did not finish due to injury. Well done lads for representing the club and to Michael for probably being well-placed in the final series standings.

This popular Half starts at the Quays Shopping Centre in Newry and finishes in Market Square in Dundalk and flirts with Brian Todd’s home-town but that was the only flirting on Valentine’s Day as the guys & gals got down to the serious business of 13.1 miles.

There were some superb performances here. Darren performed well despite the possibility that he wasn’t feeling so well, Brian, with a 1st in Age Cat, helped push the excellent Emma whereas, Anne ran a fantastic 1:38:19 and Chris outsped Cupid’s Arrow by finishing in 1:30:35 and beating his Half Mara PB by approx…4 minutes! There were rumours the apres-race pints went almost as quickly.

I was going to finish with a made-up romantic Valentine’s stat about the number of proposals made at Victoria Parkrun or something but I’ll gladly refer instead to the delightful good news for a couple of our members Louise Browne and Fintan Hurl.

Roses are red, violets are blue, Congrats to Louise & Fintan, it’s now 3, not 2!

Also…lets throw a loving glance towards our Parkrun Volunteers…thanks again everybody. If anybody would like to extend a gesture that way and volunteer, please e-mail Gerry Ward at belfastvictoriahelpers@parkrun.com