Once again it started early this week; on Tuesday to be exact with the North Down Track and Field meeting at the Bangor Sportsplex, the fourth of four. Wednesday saw three members make their way to Coleraine for the Edwin May Nissan 5 mile Classic road race. Saturday brought the Groomsport Half Marathon and 10k and the iconic ‘Conquer the Cairn’ race at Augher, Co Tyrone. On Sunday Lyndsey Pronger and Paul Tyro ran in the Bright Community 10k at Ballynoe near Downpatrick.

Emma Smith (F40) embraced a variety of disciplines at the North Down Track and Field meeting at Bangor Sportsplex on the evening of Tuesday August, 11th. In the 200m she recorded 30.55 before achieving 3.74m in the long jump. Later she measured 5.20m in the 4kg shot. All very good practice indeed for next week’s heptathlon at the Mary Peters Track. Stephen Orr (M40) is enjoying his sprinting at the moment and was pleased to run a personal best of 2.11.24 in the 800m race, finishing in second place overall. In the second 800m race Conor Moffett (MO) ran 2.30.62 to finish in 9th place in a very competitive field.

On Wednesday evening two of Orangegrove’s finest female runners made their way to Coleraine for the Edwin May Nissan 5 mile Classic road race which started at Coleraine Leisure Centre and took in a route around the town and beyond before finishing in The Diamond. Jennifer Black had a magnificent run, finishing the race in 30.02 as second lady, only eight seconds behind Springwell’s Gemma Turley who finished in 29.54. Leann Gibson also had a great race finishing in 31.58 (5th lady). Orangegrove’s Stephen Orr, fresh from the Bangor Sportsplex the previous evening, also finished in 31.58. I suspect they were running together!

The race was won by Freddy Sittuk (Raheny Shamrock AC) in 24.3 and Gemma Turley (Springwell AC) was first lady in 29.54. 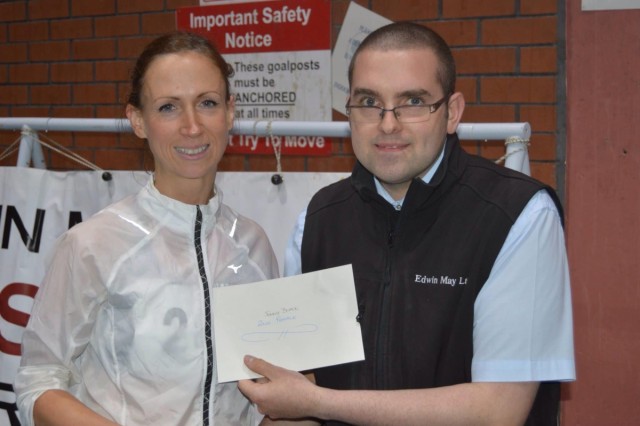 Probably the main event of the weekend was the Groomsport Half Marathon and 10k, the former a round of the Pure Running/ChampionChip Ireland Half Marathon Series, and the penultimate round of the so called ‘second half’. In fact only the Dambusters round at the Silent Valley Reservoir on August 22nd at 11am remains after this one.

The Groomsport Half and 10k are no nonsense events which start at the harbour and follow routes on the quiet country roads and coastal trails of the area; it is one lap for the 10k and two for the half marathon. It would appear that Orangegrove had six runners in the 10k and four in the half marathon.

Well, the sun shone and the sea sparkled below a mainly blue sky and the orange of Orangegrove was prominent in both races:

The 10k race was won by Adam Boyd (North Belfast Harriers) in 33.49 and Denise Logue (Ballydrain Harriers) was first lady 40.26.

The Half Marathon was won by Brian Campbell (Willowfield Harriers) in 1.13.39 with Karen Alexander (Acorns) first lady in 1.24.09.

Very well done indeed to John Craig on his third place in the 10k. It is great to see John getting back to running again and beginning to show something of his former lightening form. If ever a man needed a diversion from his considerable domestic duties it is John Craig! Very well done indeed too to Sarah Malcolmson who led the Orangegrove ladies home in a very respectable time in what was her first race in an Orangegrove vest, and I am reliably informed it was a perfect fit!

Well done too Catherine Fearon and the other Orangegrove ladies on a fine display on the day. Kathryn Morrow, she with the pink socks, ran her race not having slept much the night before due to mothering duties. Young Noah kept her up to all hours and then slept right through the race! Great running as usual from both Robin Montgomery and Andy McIntyre in the Half Marathon and a super time too from Anne Moore who will have done her prospects in the Half Marathon Series no harm at all.

That other great athlete Brian Todd appears in the results but he was not there on the day. Instead Michael O’Donoghue ran in his place and ran a good race even if he did lose his gels half way round. We know he lost his marbles a long time ago! We will both probably be in front of an ANI Board of Enquiry before the week has ended. 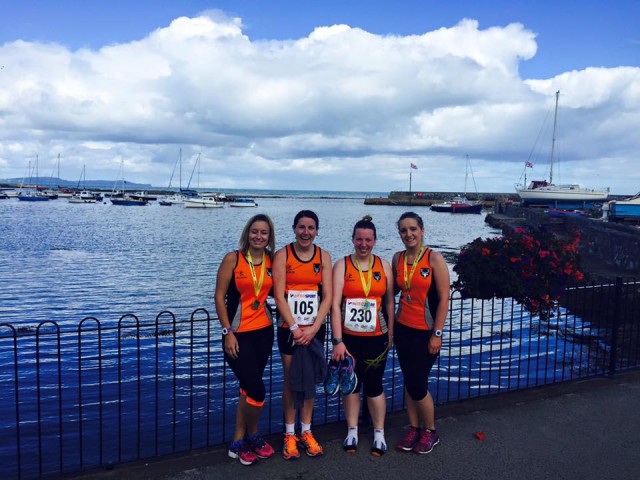 However, not all Orangegrovers who competed on Saturday were at Groomsport. Indeed, several of our more intrepid members, not content with scaling a mountain last week, did so again this week, albeit a smaller one. Ian Wilson, Alison Hall-Thompson, Elaine Mcallister and Eoin Woodman were in Co. Tyrone on Saturday near the village of Augher where they took part in the local Conquer the Cairn race. This is a five mile race over the trails of Knockmany Forest which eventually takes the runner to the top of Knockmany hill (230m) where there is a magnificent megalithic tomb, now protected from both the elements and vandalism by a modern concrete and glass housing.

The stones of the cairn are inscribed with the spirals, swirls and ‘cup-and-ring’ markings of the Bronze Age (c.3000-2000BC). An R. J. Welsh photograph of the cairn before it was enclosed is included. Whether the runners had time to view this archaeological masterpiece or had to continue their race back down to the start, I don’t know. The race was organized by the Blackwater Regional Partnership in conjunction with several local councils, including cross-border councils. Very well done indeed to those from Orangegrove who made the considerable effort to travel to Co. Tyrone for this very worthwhile venture. Their enthusiasm for running and for tackling the unusual is gratifying and long may it continue. Above all, hopefully it will survive the cross country season which is just around the corner!

So, the OAC results were as follows:

The race, which was about 5 miles, was won by Ciaran Collins in 34.23 with Niamph Heaney the first lady back in 42.36. Well done once again to those from Orangegrove who Conquered the Cairn on the day! 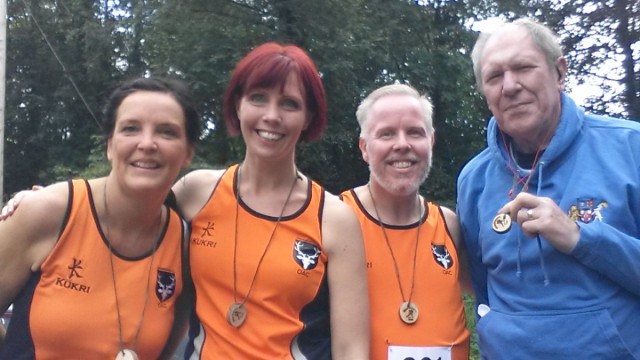 Lyndsey Pronger was in action at the end of the week as she was at the beginning of the week, at the Bright Community 10k at the village of Ballynoe near Downpatrick on Sunday. This is one of those lovely little races organized by Joe Quinn and East Down AC for which the running community is eternally grateful.

Now, I am not sure whether Lyndsey was aware, or even cared less, that she was today running in very close proximity to Ballynoe Stone Circle, a Neolithic or possibly an early Bronze Age stone circle which once contained the passage tomb of some notable dignitary who ruled the roost in this area about 3000BC. Whether that dignitary was aware of a race going on in the vicinity of his final resting place is open to conjecture. If he was he would have certainly noticed the elegant figure of Lyndsey Pronger moving along the nearby country road at a faster than average pace for the female of the species. 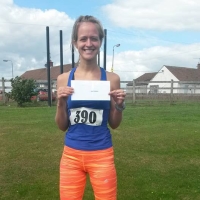 Well done Lyndsey on finishing the race as second lady in 45.02 (9th/23). Paul Tyro, her other half, finished in 4th place in 41.26. Well done to both Lyndsey and Paul for their considerable efforts on the day. The race was won by Martin Wilcox (East Down AC) in 36.20 with Niamph Kellett (East Down AC) first lady in 43.08.

After last week’s excitement with the results it was back to normal service this week with Victoria Park parkrun. Indeed, the results appeared very quickly on Saturday and, as always, our grateful thanks go to the volunteer team that make it all possible. Two hundred and eighty runners completed the 5k on Saturday morning at Victoria Park and there were one or two personal bests from amongst the Orangegrove contingent. Darren Houston is running out of his skin at the moment and achieved another personal best of 19.41. Very well done indeed, Darren! Jonny Weston is currently in great form and timed in a personal best of 20.34. Martin Doherty too was on fire and circulated in a personal best of 22.25. Carolyn Beattie smiled all the way round the course and was first lady this morning in 22.11. Well done, Carolyn! Martha Orr (JW10) had a personal best this morning of 32.39. Well done, Martha. Birthday boy Lemmy Black (Jnr/JM10)) will probably be a member soon, so we congratulate him too on his personal best of 28.29.

Paul Tyro was at Portrush parkrun where he ran a personal best on the sand of 19.58, not easy! Lyndsey was not too far behind and she crossed the line in 21.47. Sharon Dickenson was a first timer at Antrim parkrun where she was second lady in 23.58. She would likely have been first lady (she was only two seconds adrift) had she had the bacon, egg and sausages after the run rather than before it! Well done to everybody associated with Orangegrove who ran parkrun today, wherever, regardless of whether they achieved a personal best or not. 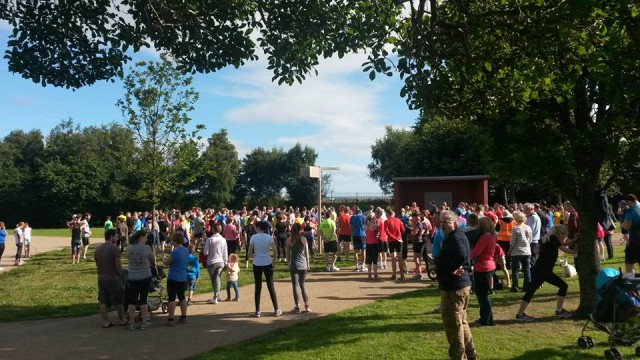 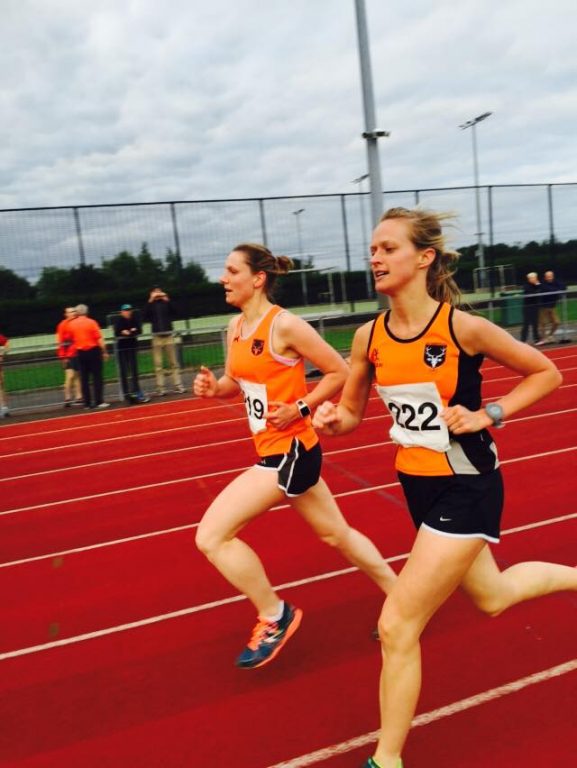 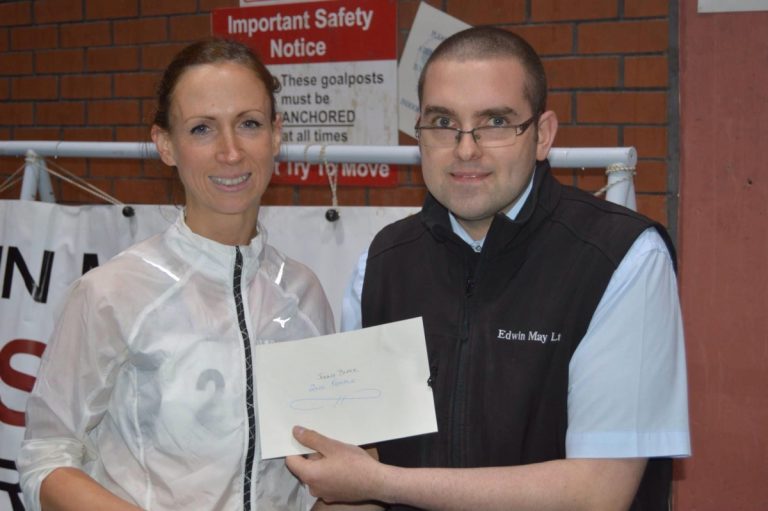 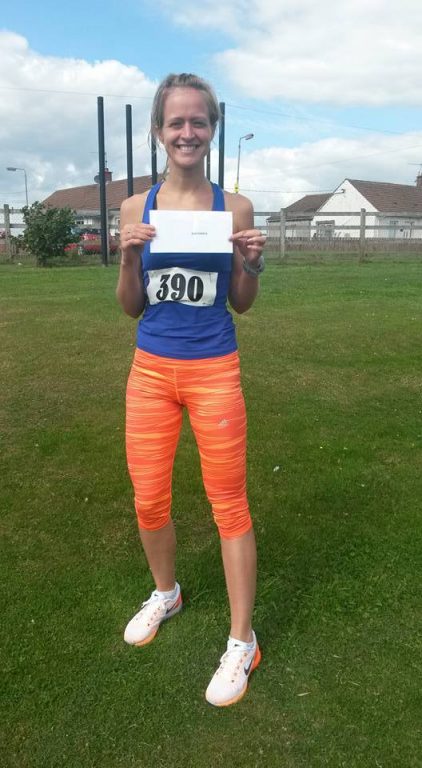 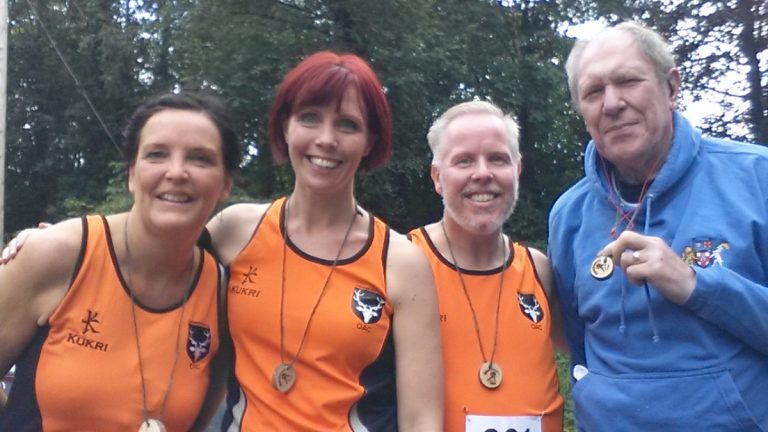 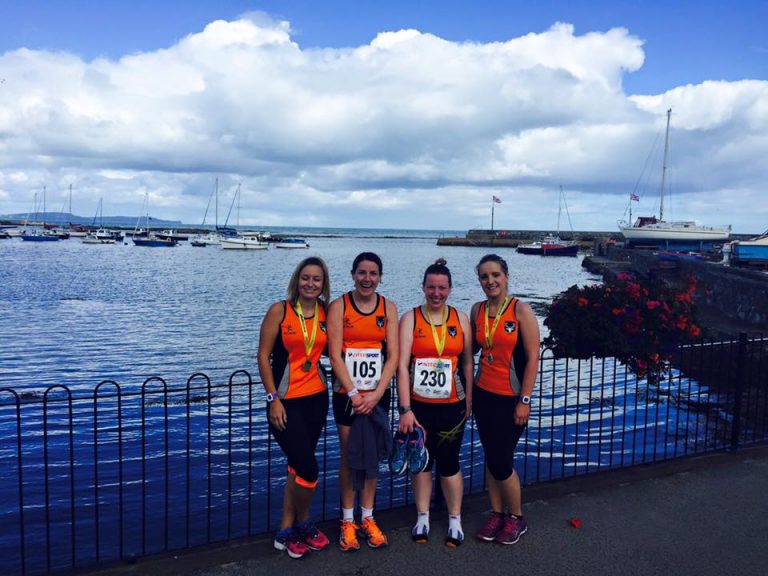 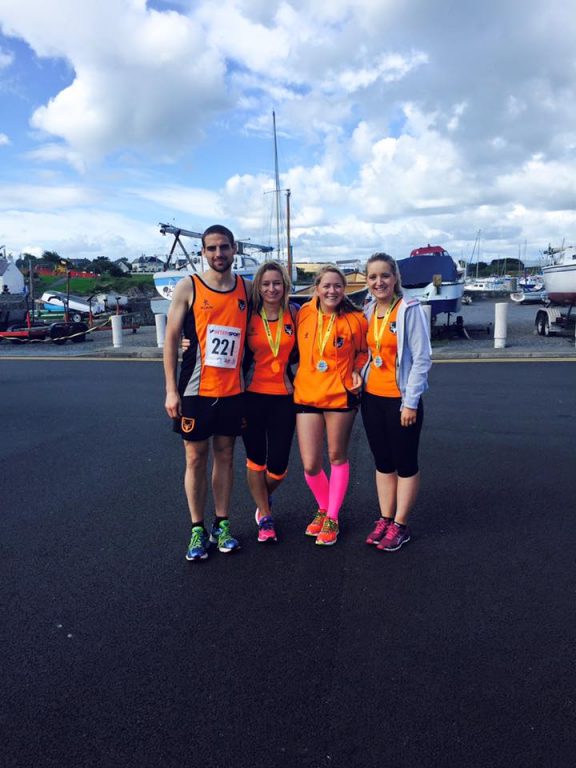 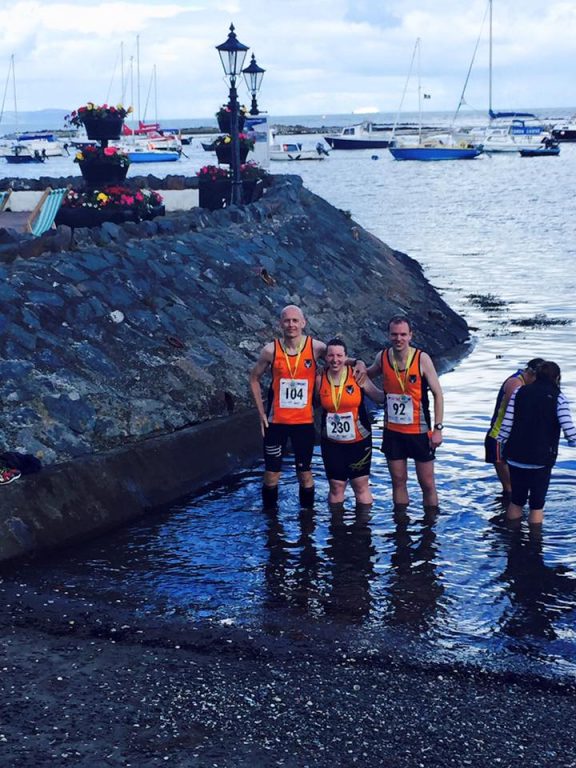