Dervock Half Marathon and 10k

The Dervock Half Marathon and 10k, part of the Kennedy Kane McArthur Festival of Running and a round of the Pure Running/ChampionChip Ireland Half Marathon Series, took place on Saturday morning. By the way, Kennedy Kane McArthur is not, as you might think, a local agricultural machinery supplier sponsoring the event. Ken McArthur was born in 1881 in Dervock and was an accomplished athlete who famously won the marathon event in the 1912 Olympics in Stockholm. So, he is one of Dervock’s most famous sons, perhaps its only one.

The Half Marathon event started at 11am and comprised an anticlockwise route leaving the village of Dervock towards Ballymoney along the Knock Road. At Garry Forest the runner turned left along the Conagher Road to the Kirk Road. From this point the route bore left towards Stranocum, crossing the River Bush and climbing again towards the junction with the Ballykenver Road. At the left turn at the Bregagh cross roads there is a short climb before the descent through the famous Dark Hedges, an avenue of 300 year old beech trees and a great place for photographs.

After the Dark Hedges it was generally downhill to the finish at the Recreation Grounds off Castlecatt Road. There were three climbs on the route, the first on the Conagher Road at approximately 2.5 miles, the second leaving the village of Stranocum at 6 miles and the final one at the Carncullagh/Moycraig junction at approximately 11.5 miles. Certainly not the easiest half marathon you will ever do, but one that is always well organized and marshalled and famous for the beauty of the countryside through which the runner travels.

The 10k route started on the Knock Road and headed towards Stranocum in the opposite direction to the half marathon runners, before returning to Dervock over the Bush River. There were three significant climbs on the route, which made this one a far from straightforward 10k. The 10k runners (91 altogether) started at 10.45, fifteen minutes before those attempting the longer race (191 runners).

On the day conditions were dry, warm but with a significant breeze which kept things fresh even if it slowed progress in places. It was interesting to see places such as Dervock and Stranocum, where you very rarely find yourself on an average day.

The following results were achieved by Orangegrove runners, four in the 10k (all female) and only two in the half marathon:-

Very well done indeed to Jenny Black, in particular, who was loaded down with silverware and envelopes at the end of her race. Leann Gibson ran superbly well as usual and Kirsty Buchanan too ran steadily to finish in a good time on what was a far from straightforward course. And great to see Linda Craig sporting the orange of Orangegrove once again and clearly enjoying the occasion in the company of her son, Gareth.

In the half marathon event there were only two OAC competitors, Anne Moore and Brian Todd:

Anne Moore, a very accomplished athlete, who has to juggle work and considerable domestic duties with her running and training, ran a beautifully controlled race to finish in an excellent time of 1.41.55. Given the difficulties of the route this was an achievement. It may be a picturesque one, but it poses a very significant challenge. Brian Todd (the writer) decided to start slowly because of an injury and then try to speed up a bit. However, instead of speeding up he actually got slower and was very lucky to finish at all in 1.51.52, his worst ever half marathon time. However, despite this, the run was memorable, particularly the section through the forbidding Dark Hedges.

Dervock….definitely one to do again next year. Very well organized, smiling faces everywhere, superb marshalling and great water stations. In fact enough water to refloat the Nomadic…and in bottles too! There were even water stations between the water stations! And, of course, Mags Mathieson was there to keep an eye on things! When you see her at an event you know it will be a good one! 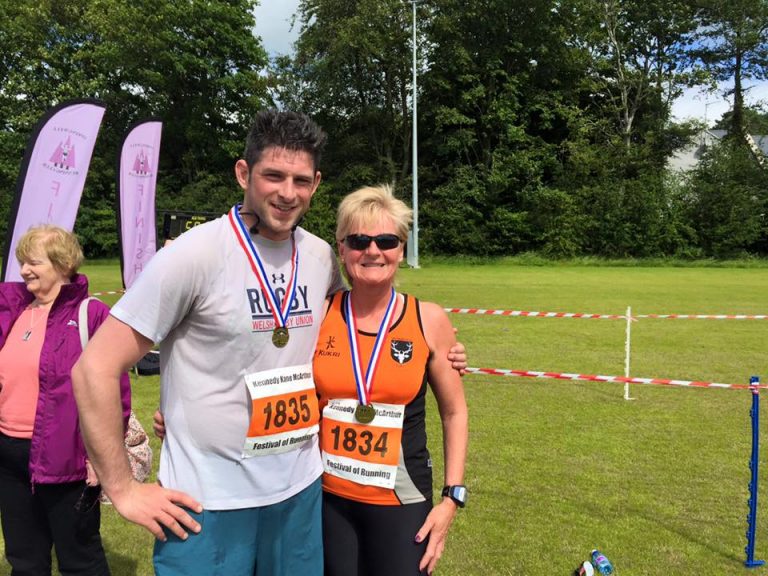