First of all many congratulations to Lyndsey Pronger who currently holds three significant Orangegrove A.C. ladies club records. A presentation of medals to mark the achievement was recently made to Lyndsey who will soon change her surname to Tyro. Whether this will improve further her athletic performance or detract from it remains to be seen. Lyndsey holds ladies records at three distances, mile, half marathon and marathon. Her times for these distances are:

Very well done on a remarkable achievement. I am uncertain whether three female club records have ever been held by one athlete in the past. Maybe somebody could enlighten us!

You have got to hand it to Newcastle A.C. Week after week the club has mounted its Hill and Dale series races in the Mournes in almost perfect weather conditions. Low cloud, wind and rain have not featured so far. And so it was on Thursday evening for race 9 in the series, Hen and Cock. Read the full report here.

Friday evening brought the Antrim 5 miler, a popular road race which follows a scenic route starting at the Antrim Forum Leisure Centre and takes in the beautiful banks of the Six Mile Water and, of course, Lough Neagh itself. Conditions were dry but breezy and a number of Orangegrove runners made their way to the start line. Now, at this point it is probably important to give Paul Tyro his place in the sun. Over the last few months Paul has had his running thunder regularly stolen by his partner Lyndsey Pronger, something which, for a Kiwi, must be very difficult to take. So, on this occasion, I will begin with Paul who made light of the challenge by finishing in 29.40, which was 12th place overall. Well done, Paul! Lyndsey who? Andy McIntyre was there too and finished in 30.41 (17th place). A super performance. Martin O’Brien crossed the line in 35.27, a creditable performance. Paul Gruhn turned up as well to complete the Orangegrove male line up and his time of 41.38 is worthy of mention. However, you cannot really avoid mentioning Lyndsey Pronger, can you? Lyndsey was in her usual Friday evening sparkling form and she toured around the course in a speedy 32.55, a time which gave her a podium position as second lady to Gemma Turley (Springwell) on 32.12. The race was won by Ben Branagh (St. Malachy’s A.C.) in 25.31. Well done to everyone from Orangegrove who made the effort to travel to Antrim for this great event.

On Saturday, Thomas and Liz Leitch were in south Dublin at Dun Laoghaire for the Sonia O’Sullivan 5k race around the seaside town to mark the 20th anniversary of her win in the 5000m at the IIAF Championships in Gothenburg, Sweden, in 1995. The race started at the harbour at Queenstown Road and took the runners initially northwards parallel with the railway track before turning south towards the James Joyce Tower and Museum, for the return journey along the coast to the finish. Thomas finished the race in 19th place on 18.26 and Liz was 18th lady in 22.15. Participants were awarded impressive donut shaped medals which were replicas of the medal won by Sonia in 1995, who also ran the race. Well done to Thomas and Liz. Thomas, of course, could never really be satisfied with a couple of silly old 5k races in one weekend. So, the rumour is that he will run the Flagstaff to Carlingford mountain race on Sunday which is a round of the NIMRA championship. The race follows the ridge of the Cooley mountains from Flagstaff to Slieve Foye, via the Windy Gap, and then down to Carlingford, a distance of about 11 miles with 3000 feet of climb. I understand Liz has refused to accompany him and will spend the two hours or less that it will take Thomas to run the race in one of Carlingford’s quaint little coffee houses. Thomas Leitch finished 16th overall in 1.57.3. Seamus Lynch (Newcastle A.C.) won the race in 1.36.1 and Shileen O’Kane (Lagan Valley A.C.) was first lady in 1.56.1.

Eoin Woodman was in Enniskillen on Saturday taking part in the Enniskillen 10k, which started and finished at the Lakeland Forum. Eoin, running in the M60 category, got round in 1.10.35 to finish in a creditable 553rd place out of nearly 800 competitors. Well done Eoin! The race was won by Stephen Duncan in 32.16 with Donna Evans first lady in 39.46.

Meanwhile in Liverpool on Sunday Pauline Bayliss and Michael O’Donoghue were running in the city’s Rock and Roll Marathon, beginning at the Albert Dock and finishing at the Liverpool Echo Arena on the waterfront. The route is really a scenic tour of the city taking in some of the sites associated with the Beatles such as the Cavern Club, Penny Lane, etc. Goodison Park and Anfield are on the route, as is Chinatown and some of Liverpool’s most beautiful parks, Stanley Park, Princes Park, Sefton Park and Otterspool Park, before the run-in to the finish which is overseen by the iconic Liver Building. Live music and entertainment en-route is a feature of this marathon. However, it will be no breeze as it is reputed to be quite hilly in places. Well done to both Pauline and Michael on their endeavour in getting to Liverpool and the news is good from both Orangegrove athletes:

Very well done indeed from everybody at Orangegrove A.C.

Perfect weather conditions on Saturday morning encouraged the usual more than three hundred runners to get out of their beds at an early hour and make their way to Victoria Park for that institution of the sixth day, parkrun. The colour of the running attire at the start line as the off approached was enough to force the wearing of designer shades even if the sun had not been shining. There were a number of Orangegrove personal bests amongst the junior members in particular when the results appeared. Well done to Benjamin Hall-Thompson (JM 11-14) 21.56, Ryan Drain (JM10) 24.46 and Sam Rainey (JM10) 25.36. Great to see Gary Morrow (3rd place) getting back to his best after injury on 17.43. At Ormeau, Emma McWilliams, a regular at this parkrun on her doorstep, ran a personal best of 22.34. Well done, Emma!

A few Orangegrovers were running parkruns outside the six counties. Thomas and Elizabeth Leitch were flying the orange duster in south Dublin this weekend and took in Cabinteely Park parkrun. The results show that Thomas finished in 16th place on 23.08 and Liz in 21st place on 23.55. Maybe they were saving themselves for something (see above). Mark Williamson was once again in St. Helen’s, Lancashire, for some reason, and ran in the local parkrun at The Mansion House, finishing in 22.06 (15th place), a personal best for Mark who is a regular at this venue. Michael O’Donoghue is in Liverpool this weekend for Sunday’s Rock and Roll Marathon. Despite having 26 odd miles on his mind on the morrow he, nevertheless, took in the Prince’s Park parkrun on Saturday morning, finishing in 23.15 (58th place).

The parkrun concept is about participation and volunteering. A lot of people do the former, but not the latter. Become part of that elite minority group who do both… check out belfastvictoriahelpers@parkrun.com 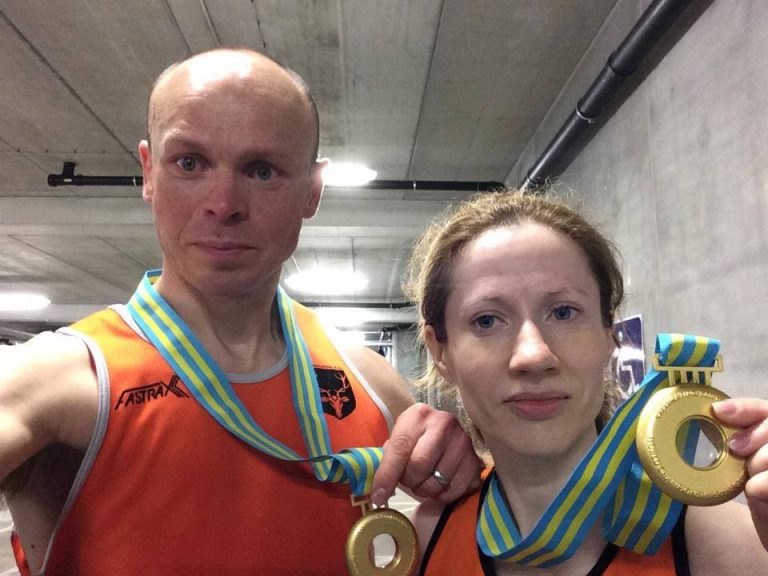 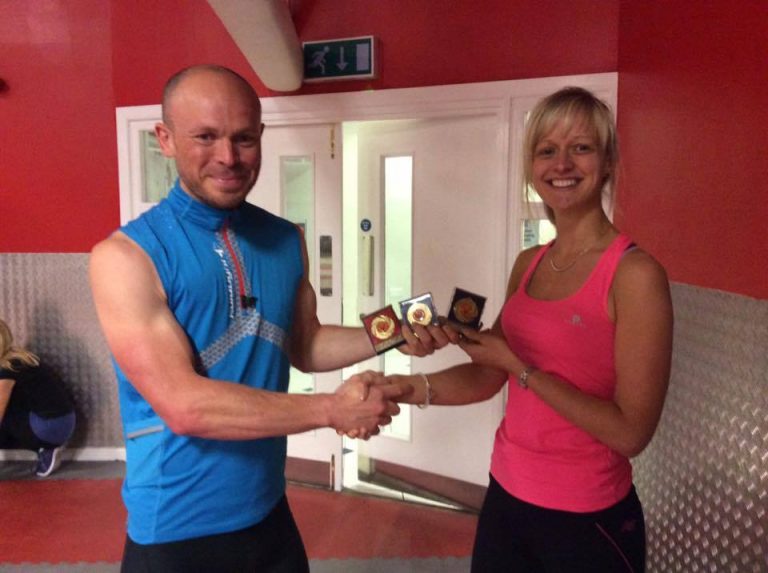 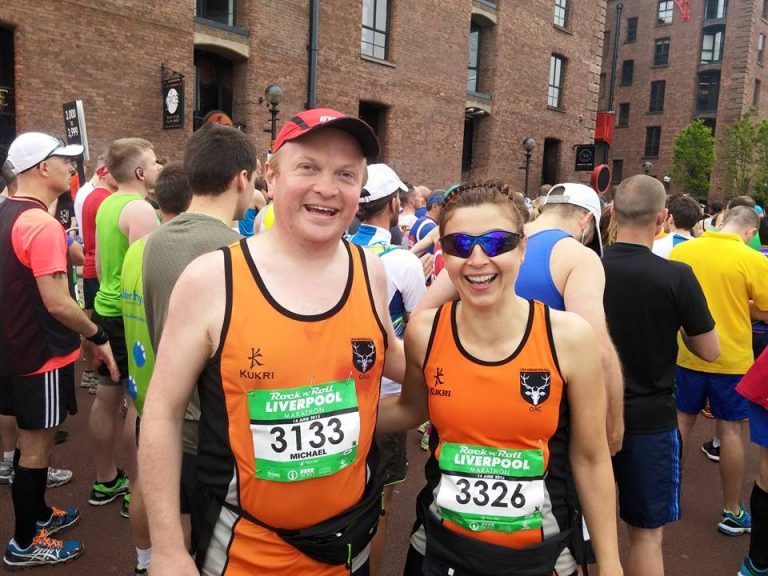