We all get a little flutter in the heart on Saturday mornings when we awake to the prospect of parkrun within the hour. However, in the unlikely event of that little Saturday morning heart flutter becoming a full ventricular fibrillation during the course of your run, a number of us gathered at the clubhouse on Tuesday to take a course in cardio pulmonary resuscitation and defibrillation. By the way, Orangegrove A.C. is just about to spend a lot of money on the purchase of a defibrillator. So, if you are going to have a sudden cardiac arrest while running, Victoria Park might be a good place to have it. The chances are you might just have a better than average chance of survival. Those who took the course were Louise Browne, Kathryn Morrow, Sharon Dickenson, Selina Myles, Liz Watt, Brian Todd, Gillian Sykes and Stephen Craig. The course was organized by Gary Keenan and very well delivered by Philip West. We are very grateful to both gentlemen for their efforts on our behalf. By the way, there is absolutely no truth in the scurrilous rumour that was spread that we were considering a ‘no barcode no defibrillation’ rule. Rest assured that if you need the machine, and hopefully it will never be needed, it will be made available, barcode or no barcode. As a member of Orangegrove fairly advanced in years, and a likely early candidate for the defibrillator, my main objective in attending the course was to ensure that the training was up to standard….just in case!

Nearly 500 runners took part in the Fairhill (Hey!) 5 mile road race on Tuesday evening, and Orangegrove’s Martin O’Brien was one of them. Martin, who had a good run on Sunday in the Belfast One World 10k race at Ormeau, scorched around the Ballymena course in a personal best time of 36.14, despite being troubled by a hamstring injury. The fact that he is a local boy made good and possibly knew a few shortcuts might also have helped a bit. Very well done indeed, Martin. The race was won by Brian Campbell (25.58) and Cathy McCourt (North Belfast Harriers) was first lady in 29.14.

Meanwhile, south of Lough Neagh on the same evening hundreds of runners gathered near Craigavon Sports Centre for the annual Craigavon Lakes 10k and 5k. The 10k consists of two laps of the lakes and the 5k just one. Orangegrove had two members participating in the 10k event, the ever improving Des Fahy and the ever consistent Chris Downey. Des had a battle royal with Terry Eakin (North Down) and just managed to hold off the very tall Bangor runner by about 20 seconds in 38.58 (31st/273). Chris Downey had a very good run as well to finish on the first page of the results in 42.04 (49th/273). Well done indeed to both Orangegrove athletes. Paddy Hamilton (Slieve Gullion Runners) won the 10k event in 31.10 and Heather Foley (Unattached) was first lady in 36.48.

There has been a lot of bluster about Hill and Dale recently but the real thing happened in Newcastle on Thursday evening, June 4th. This week was the eighth round of the Newcastle A.C. Hill and Dale series and Millstone Mountain was the focus of our attention. Read the full race report here.

Paul Tyro and his soon to be bride Lyndsey Pronger sometimes turn up in the most unexpected of places. On Friday evening they were to be found in the beautiful grounds of Shane’s Castle, once the ancestral home of the O’Neill dynasty, taking part in the St. Benedict’s College, Randalstown, 10k race. And it was a productive evening for the Orangegrove pair, for Lyndsey in particular, who finished third in the ladies section of the race in the very good time of 42.02. Paul enjoyed his evening too although I can’t post a time for him as no results sheet has yet been published. Now doubt he will be well placed near the top of the table when it does appear. The race was won by Mark McKinstry of North Belfast Harriers in 33.20 and Martsje Hell, also North Belfast Harriers, was first lady in 40.07.

Saturday brought the Northern Ireland and Ulster Age Group and Senior Track and Field meeting at the Mary Peters’ Track. Orangegrove had a few of its speedier brethren taking part in some of the track events. In Heat 1 of the 800m Stephen Orr recorded 2.21.05 (8th/club record) and Raymond Leitch 2.29.78 (9th). In the final of the men’s 5000m Thomas Leitch recorded 18.12.23 (14th/personal best) and Joe Craney 18.57.43 (15th). In the 800m Senior Women’s final Joy McAleer was 4th in 2.54.85. Leann Gibson was in the final of the Senior Women’s 1500m race and finished second to North Down’s Jessica Craig in 5.17.73. Very well done indeed to all those who sported the orange vest at the Mary Peters’ Track today in what were breezy difficult conditions, and grateful thanks too to those who made their way to the track to offer support and encouragement.

While the orange vest was circulating the Mary Peters Track, it was also running the trails and mountain paths of the Mournes in the vicinity of Kilbroney Park and well beyond. Read the full race report.

While a number of Orangegrovers went to Kilbroney to run a half marathon, Des Fahy decided to go a bit further, to Helsinki, capital of Finland, to be exact. He was running in today’s half marathon event which is regarded as one of the best in Europe for its hospitality and scenic route which takes full advantage of the city’s great port location on the Gulf of Finland, an extension of the Baltic Sea. Des is running extremely well at the moment and has packed a few impressive times in various events lately, so it will be no surprise to us all if the news from Suomi is good. At the time of posting this report at 10.45pm on Sunday 7th June, 2015, no list of results had yet appeared. Result received (Monday)…1.30.43 (10th/M45). Well done!

The Energia Belfast 24 hour race will take place at the Mary Peters Track on Friday/Saturday 17th-18th July, 2015, beginning at 6.45pm on the Friday and ending exactly 24 hours later. Orangegrove has entered a team consisting of Robin Montgomery, Stephen Anderson, Eleanor Acheson and Martin Doherty. The guys have already started their training in Victoria Park and would welcome any support and encouragement that you might have to offer, either on the night at the track or at Victoria Park in training. In fact they would welcome any member who would wish to train with them. Keep an eye on the Club facebook site for details. At the Mary Peters Track the format will be that each member will run for two hours and rest for six until the 24 hours are covered. Laps covered in that time by the team will determine the positions at the end. Come give them your support. They are, after all, running round in circles for their Club and the least you can do is show an interest!

Saturday morning dawned dry but breezy and nearly three hundred runners of all shapes, sizes and descriptions made their way to Victoria Park for their weekly dose of parkrun. The bell rang and off they set. A dog barked in the distance and an elderly lone walker wondered what he had landed himself into. Prior to parkrun, Victoria Park on a Saturday morning at 9.30am was the preserve of the wildlife, the odd walker and the occasional drunk zigzagging his way home after the night before. Now look at it! Lovely ladies in lycra everywhere and some good runners amongst them too.

For many, the best part of it has yet to come, the afters in the clubhouse; tea, coffee, buns and a lot of chat. Romances have blossomed, new friendships have been forged, proposals of marriage have been made and there has been the odd domestic skirmish as well. That’s life, and you will find it at Victoria Park on a Saturday morning.

One of the great things about parkrun, I think, is that it encourages you to get out of your bed on a Saturday morning long before you might otherwise have done. You then pack a lot into an hour at the run, and at the end of it all the day is still young and productive. The feelgood factor is enormous and the sense of achievement for many is palpable. What a wonderful concept it is and long may it continue to expand and improve.

A few Orangegrovers excelled themselves on Saturday morning, despite the breeze, with personal bests. Very well done to Nicholas Thomas (JM 11-14) 20.55, Louise Browne 22.06, Benjamin Hall-Thompson (JM 11-14) 22.32, Jill Holland 22.57, Fintan Hurl 23.32 and Kirsty Buchanan 24.55. Brian Todd (the writer) decided to complete his 100th parkrun to the sound of Atlantic breakers rather than to the gently lapping waters of the Victoria Park lake.

However, the return journey from the flag at White Rocks to the finish was dogged by gale force winds which practically blew the majority of us to a standstill. Enjoyable nevertheless! Very well done indeed too to the lovely Myrtle Woodman who completed her 50th parkrun at Victoria Park this morning. May there be at least fifty more before too much time passes.

Mark Williamson is still on his sojourn across the water in Scotland and yesterday he completed the Eglinton Park parkrun near Irvine in 22.10 which gave him 16th place. Very well done indeed to Mark who followed this up by climbing Ben Nevis as part of his efforts to raise funds for PANDAS, the Cameron Lindsay charity.

Yes, Paul Tyro and Lyndsey Pronger have a habit of turning up where you might least expect them. On Saturday they were in Newtownabbey for Valley parkrun where Paul finished in third place on 19.17. However, as usual, he was outshone by his lady, Lyndsey, who finished in 7th place in 20.55 which was a new female record for a far from easy course. Many congratulations!

Parkrun depends on those who take advantage of it giving a little back as a volunteer in due course. Have a look at the following belfastvictoriahelpers@parkrun.com to offer your services. You will be shown what to do and how to do it. Don’t linger! Do it now! 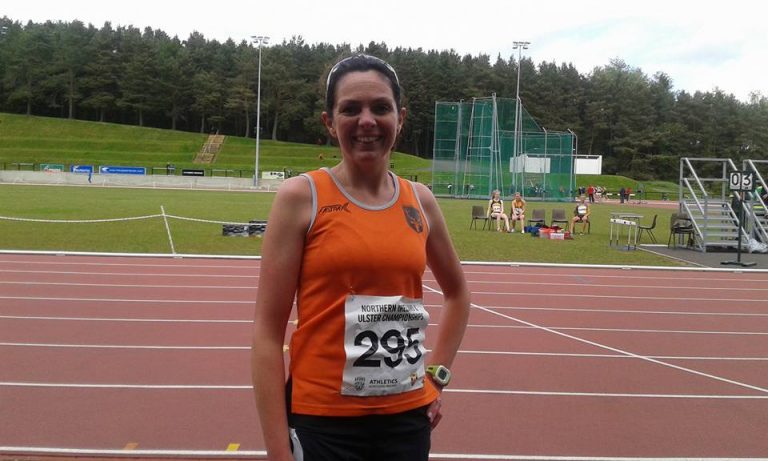 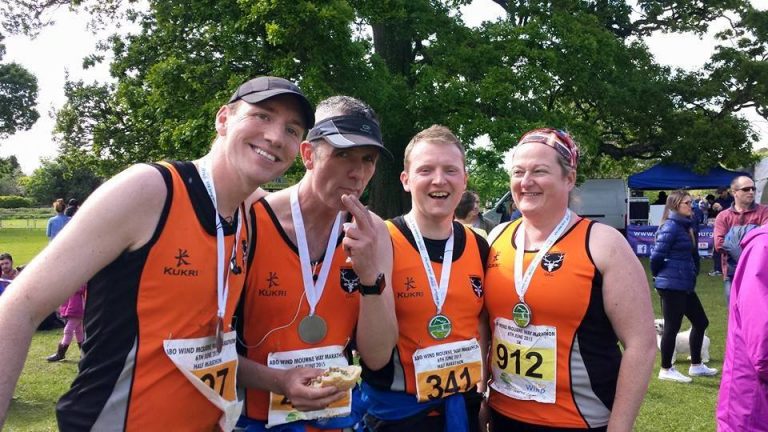 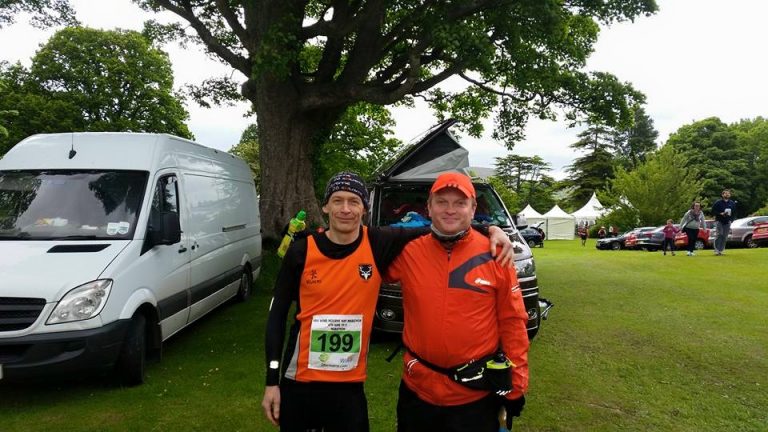 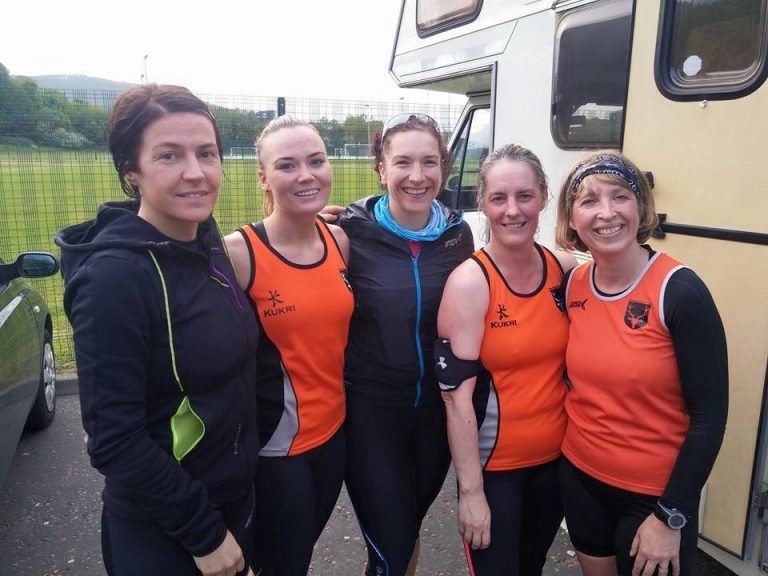 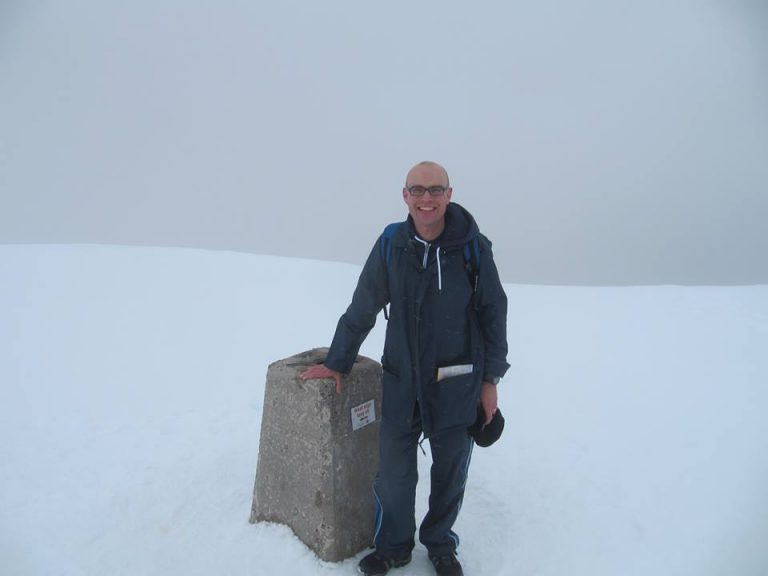 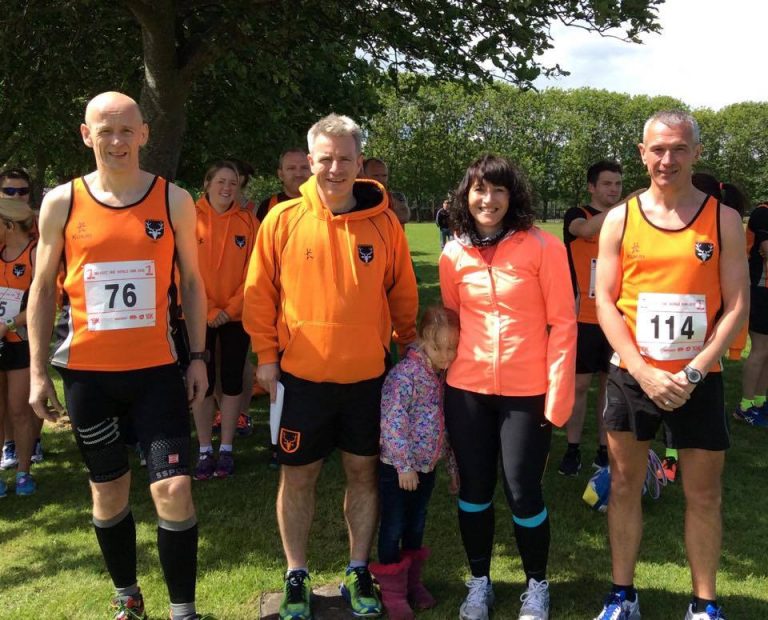 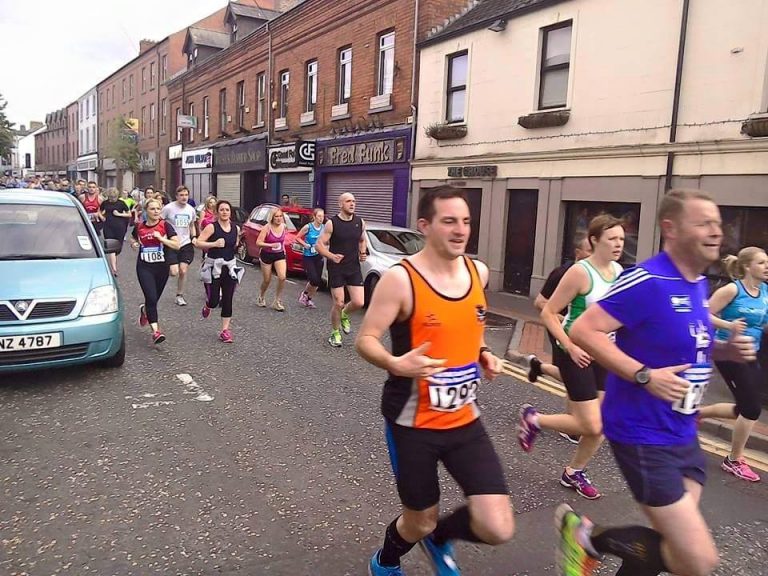 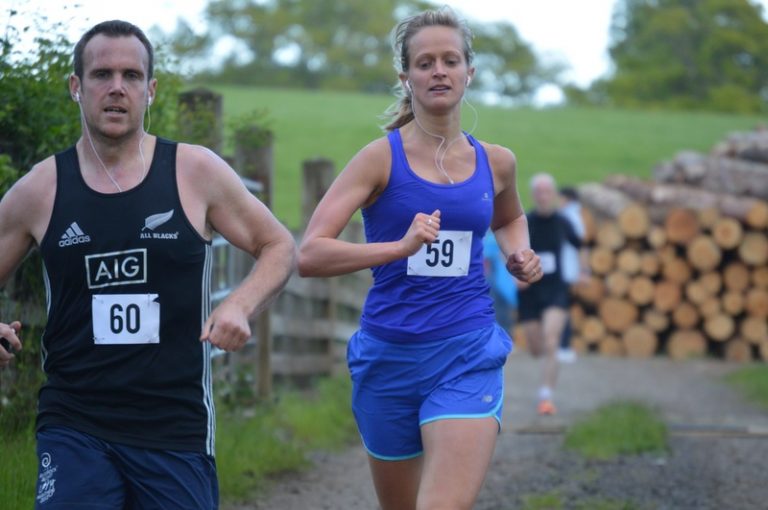 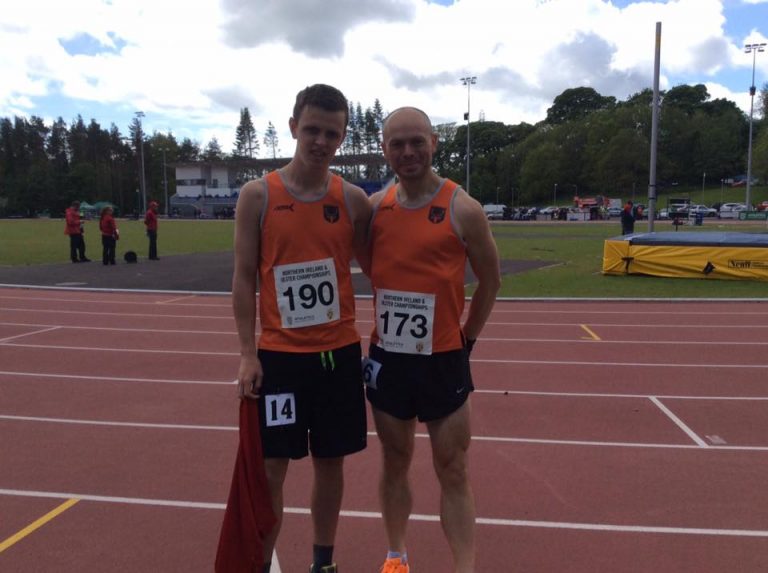